Saved In Bedtime and Night Lights 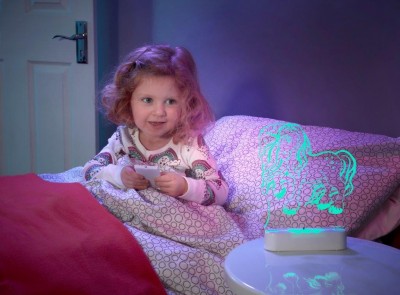 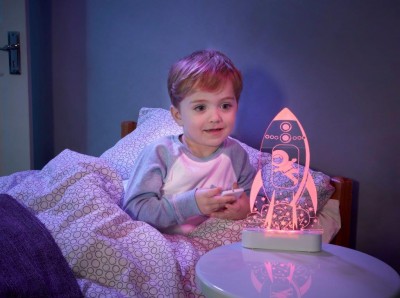 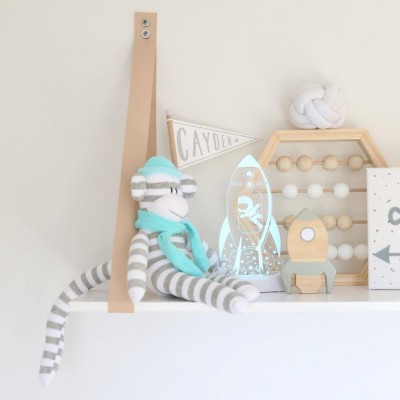 Designed to help your little ones get a better nights sleep, the SleepyLight features colour changing LEDs in a range of stylish designs as well as a child-friendly remote control. The SleepyLight can either be set to a single colour or can cycle through all 12 colours. The built in sleep function allows the light to be kept on throughout the night at very low brightness while the side lamp provides extra light when you need it, ideal for bedtime reading. The SleepyLight is perfect for travelling and weekends away with long battery life, low power comsumption and no heat output. Features Portable, battery powered, enegy eficient nightlight Low light setting meaning the SleepyLight can be left on safely all night Interchangeable uprights allows you to change the design when you want Supplied with an easy to use remote control to change colours “Side Lamp” feature provides extra light when you need it e.g night time feeds without needing to turn on extra lights USB and battery powered (x3 AA batteries)17 unique designs to choose from

Good packaging, showed the product well. Images on the box showed the different colours. Overall I was excited to see how it worked. Packaging showed the product and what it does really well. It wasn’t over-packaged; there wasn’t a lot to go into the bin. I think it’s a good idea for a young baby. When Matilda was a few months old she loved looking at bright lights before falling asleep. The remote control is handy when you’re settling a baby as you don’t always want to get up to switch something on and risk waking the baby/ stopping them dropping off at the last minute! I actually struggled to find the instructions in the box. Because the packaging had a large clear section in the middle, the instructions are stuffed in one end and unfortunately this wasn’t the end I opened. The instructions themselves were fairly clear but I do think a lot of people wonder miss them and the use of light isn’t entirely intuitive. The light and the remote control were both fully assembled inside the box and the batteries inserted/ charged. I found you had to be fairly close to the light especially to get the colours to change. Other than that, it worked really well.Maybe Matilda is too young but she found the remote control very frustrating which I was surprised by as she had other lights with a similar remote control ( but slightly simpler) which she enjoys using herself. I used the cycling colours when I introduced it to her and to show her how it worked but when we tried it this way as a night light she found it too engaging and wanted to name the colours etc. For the nightlight, I used one colour at a time which worked better, providing enough light to see her and check she was OK enough to disturb her. I like to keep a dull light on as Matilda still wakes a couple of times in the night so it makes checking on her easier. This light was the perfect brightness first this purpose. I didn’t find the light bright enough for use to night read a book by. Maybe if it was an older child reading independently it would have worked for them. For her bedtime story we definitely needed something a little brighter. We didn’t take this on holiday as we haven’t been away since receiving the light but we would seriously think about taking this away in place of the battery power light we normally take. We did test the charge function and the battery did last well so I wouldn’t have any concerns when taking it away with us. It was OK but the owl’s ears are rather sharp so it could have done with some extra sanding or smoothing. I think it does in the long run because the batteries are rechargeable however it is quite expensive initially compared to other nightlight type products for children that play music or project onto the ceiling. I thought the range of pictures is really good and unusual for a nightlight which tends to just be stars or sheep or teddies. Matilda loves owls after reading the Gruffalo books so to be able to get an owl design for her was perfect. I would purchase this because of the design. I think we would have got lots of value out of it when she was a baby but I also think it is something that will last for a long time. I would recommend but for younger children than Matilda. Could do with some refinements but generally a good product. My experience was better than I expected when I initially read the description online. The light was larger than I had envisioned. I was a little bit disappointed with the finish and thought it could have been more refined. If I saw the product in store and could try it, I think I would be more inclined to buy it as the worth of it is easier to see in real life. I think it would be a harder sell online where there are a huge number of similar products at a similar price point which on the face of it do more. Emma Hutchins-Warren – Matilda 21 Months

I was happy with how the product looked when it arrived. Attractive packaging which shows off the product nicely and succinctly explains the features. I like that you can try out the colours whilst it is in the box.I like the fact that it is fun for the child, making them feel more secure at bedtime. I also like the fact that it turns off itself after 40 minutes. Nothing negative to say about the instructions. No problems setting the product up.The product is simple to use. I like the buttons with the colours on the remote. She’s still a bit young to operate it on her own. I think when she is older she will enjoy choosing the colours on the remote control. We used the colour cycle as she enjoyed watching the colours change.I did not use the built in sleep function as I always set it to turn off.A good nigh time reading lamp. It provides a nice amount of light near the book whilst keeping the room dark enough. We have not taken this away with us yet. It’s a nice design; it looks quite basic but does the job nicely. Even though I do like the product I personally wouldn’t pay £30 for it as I would probably find a cheaper (less fun) alternative night light.I loved the design is very cute and fun and there is a nice range of colours. I would not purchase unless I saw it on offer. It does what it does well, however I think for me it would be surplus to requirements. I would recommend if it were what they were after I would recommend it, for example if they had a child who was scared of the dark.I like the design and the functionality and the colours. It’s just priced a little higher than I would pay. Good experience with the product. It’s a cute, more interactive version of a traditional night light. Sarah McFarlin – Daughter

Was very pleased to receive this to test as haven’t considered using a night light in the past so was nice to see how my daughter would react to having a light in her room. Gives something to add to bedtime routine and also allows for education as we were able to discuss the different colours as they appeared. Was very easy to use and my 5 yr. old was very happy to play around pressing the different buttons as using the remote to change the settings on it herself. The battery allowed for us to take it easily with us when we went away and meant it was easier to settle my daughter into a strange environment.