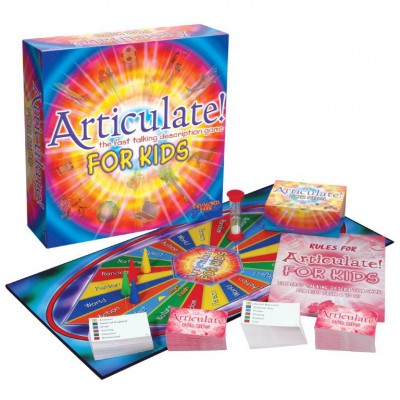 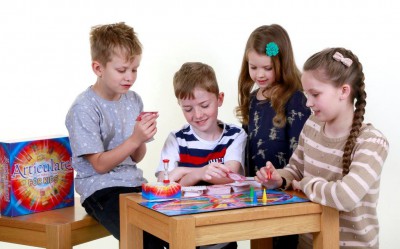 Articulate – the spectacularly successful description game can now be played by kids as young as 6 and as old as 12. This game can also be played with the adult version.
Articulate for Kids is the same fast moving, lively, gripping fun as the adult version. Played in teams, the idea is to describe as many card entries as possible to your team mates in 30 seconds without giving "begins with" or "sounds like" clues.Compiled by an educational specialist there are 336 cards with over 2,000 entries in the same six categories as the original Articulate!Complete with it’s own board it can be played alone or along with Articulate! So there’s no escape from all those fast talking kids.For 4 – 20 Players
Ages 6 – 12
£19.99

Nice
vibrant packaging, pleasing to look at.
Packaging is very appealing to children and would catch your eye in a
store. Concept of this game was easy
enough for me to understand. Older child understood the concept of the game
however some of the rules were quite confusing etc. once moving round the
board, i.e. having to remember who moves when who guessed right etc. Age
appropriate yes, but some of the words were very difficult for the 8 year old
to even know what they were i.e. "stratosphere” and had to ask. My girls loved this game and invited friends
round to play it, for two sisters that struggle to play nicely alongside each
other this was a miracle! Helped with cooperative play and using imagination. Definitely a game that holds their interest
apart from some of the trickier to understand words. Very good quality. The price is comparable to other similar
games on the market. I played it with
the children and found it as much fun as they did. I would purchase this game and I would
recommend. Nice and easy for any age to
set up, simple rules to a certain extent, only critique is some of the more
complex words, as this states on box age
6 plus, there is no way a 6 year old would know some of the words or have a
clue without help how to describe them through mime etc.. Overall though a
great game and I would definitely purchase knowing now how entertaining it is! Zoe
Hicks – Zara & Izobel – 12 & 8 years

This
looked a very good quality game when it arrived. Packaging is very bright and colourful. I found this game very easy to play. Ethan loved this game and totally understood
the concept. I thought that he would not be able to think of things to
say without giving away the answers, but he grasped the game quickly
enough. Some of the cards Ethan didn’t
know what it was, so with a little help whisper in his ear he is learning new
thing too. Ethan has very little
attention span so I don’t think he would play it for long but every day we have
to play it for about an hour. Well put
together, loads of cards so you don’t keep having to do the same ones. I personally feel the price is a little high
for this game. The World cards are really
hard to describe for both young and old.
I would purchase this game. I
have already recommended and it has been purchased as a present. A good family game for young and old alike. Helen Wilson – Ethan 8 Years

On
the whole looked a pretty good game when arrived. Packaging is colourful and
attractive to children. The concept of
the game is reasonably straightforward but it takes a bit of thought. My children do understand the concept of the
game, although it took a bit of explaining. However, they thought they could
pick it up and start playing straight away and they were disappointed they
couldn’t play it just the two of them.Age suitability for this game was
just right. We enjoyed the game very
much but felt it had two failings. Firstly, the time allowed is too short,
particularly for smaller children who take a few seconds to think of what to
say. We timed the sand in the timer and it only allowed us 32 seconds.
Secondly, there are a substantial number of questions on the card that were too
hard for 8 and 9 year olds. This is problematic when kids can only pass once on
a turn and wastes time selecting new cards. Over time, it will improve their general
knowledge. It also encourages team work, creativity, language skills and taking
turns. The game really does need the input of at least one adult to explain
some of the words / things on cards. Without this, I think children would lose
interest pretty quickly. The game is
well made and of good quality. I do
think it is good value for money.
Although I personally feel this is more suitable to children older than
mine. I did like the colourful board and
pieces, but I did not like the timer (too short a time). I would purchase this game for an older child
about 11-12 years. I would recommend as
a good constructive game. On the whole,
we enjoyed this and when we played it as a family, it was an enjoyable
experience. Kate Crane – Matthew & Alexandra – 9 & 8 Years

Overall though a great game and I would definitely purchase knowing now how entertaining it is!