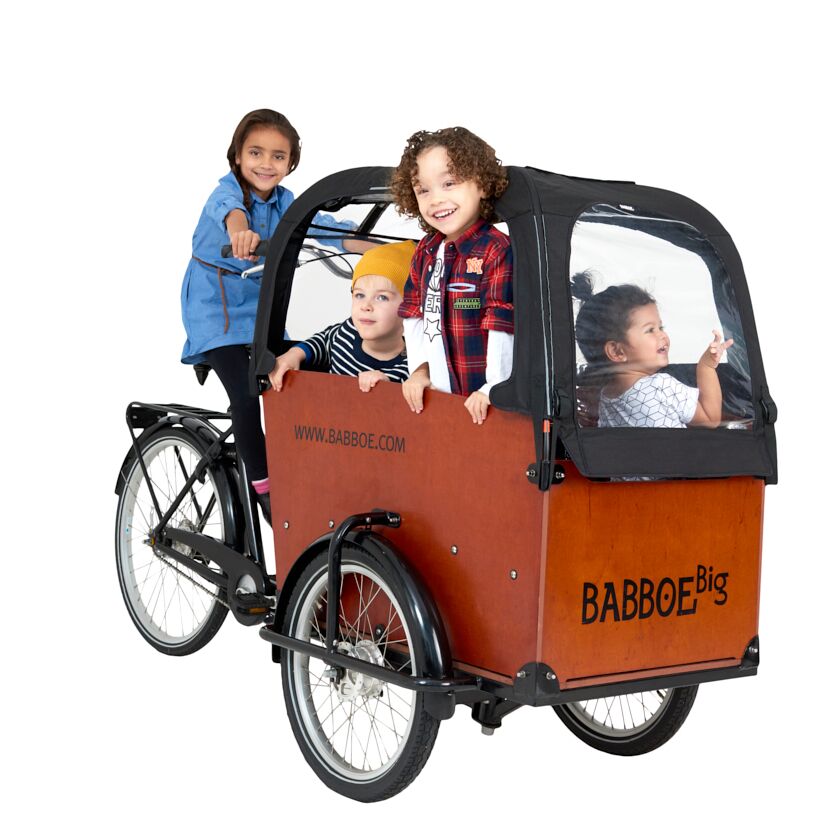 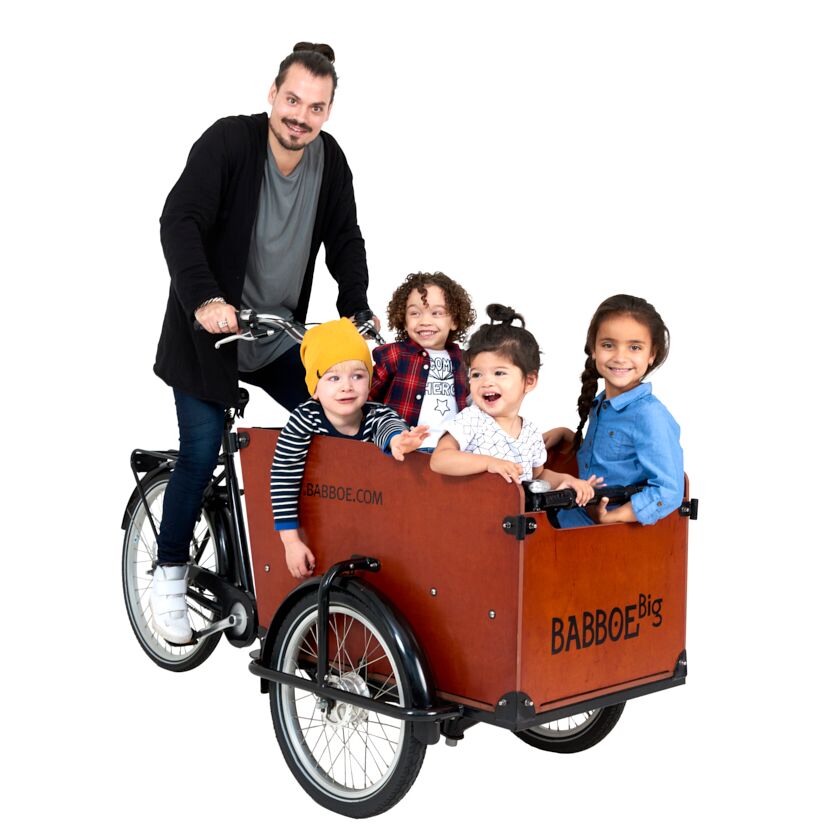 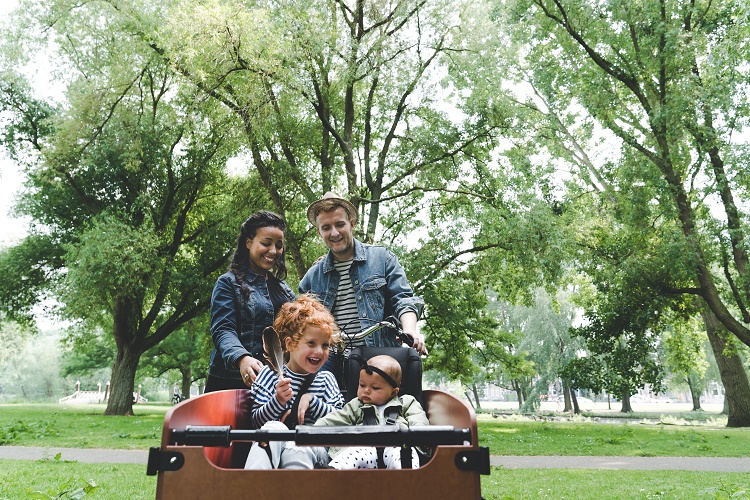 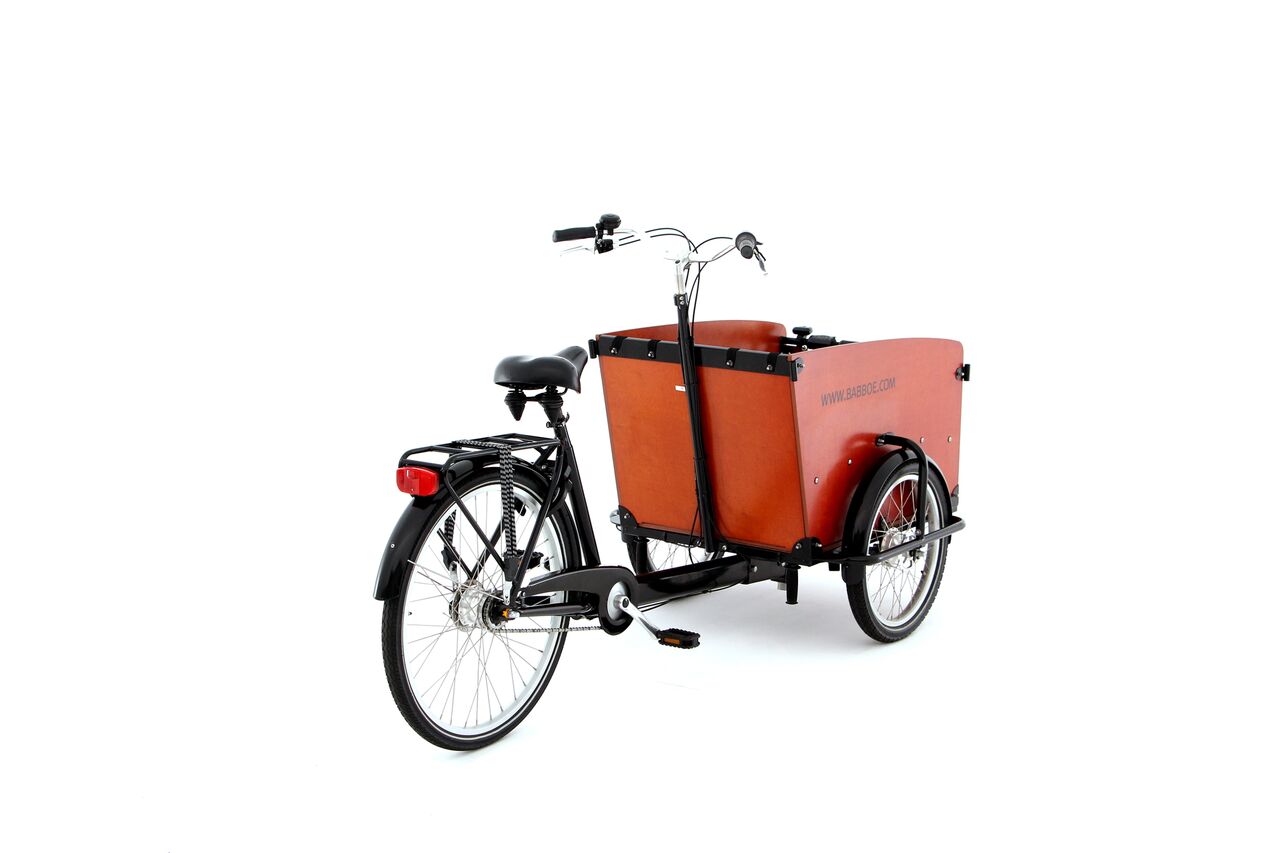 The Babboe was created by a group of Dutch parents who wanted to have a quality cargo bike for their families for a reasonable price. They looked at the other products on the market, made improvements and added features that are important for families. With the help of an engineering company they created an excellent product that is great looking, fun, practical and easy to use. Babboe is a real success story, over 50,000 bikes have been sold and the Babboe is now the number one selling cargo bike in Holland.

Why choose a Babboe?

Besides having a great design, the Babboe cargo bike (or box bike) was created to make life fun and easy for you and your entire family, even the dog. With the Babboe cargo bike you spend quality time with your children as you zoom around and there is plenty of space for shopping, the dog or even your children’s friends. With a Babboe there is no need to search crowded streets for a parking space or wait in a line of cars to pick up your children from school. It makes life fast, fun and easy.

At first I did think that this would be really heavy and cumbersome and that I would feel really silly using it.  At first glance it is quite old fashioned looking and looks like an old fifties style bike.  The lady from Babboe came and showed me how everything worked and it was all really simple and self-explanatory really.  Having pushed the bike up my driveway, where it was really heavy I expected it to be really hard work to ride.  I was pleasantly surprised at how much lighter it was than I expected.  It takes a bit of getting used to as you have to ride in a different way to on a normal bike, but once I’d gone round a couple of corners I’d got the hang of it.  Once the children were in the cargo section,  again it was much lighter than expected, however any sort of hill was a bit of a killer.  The gears were really effective however and helped massively.  The bike itself felt very secure when the children were in the cargo section.  Each child had a harness, which would be very tricky for a child to undo.  They were delighted to be in it so didn’t attempt to escape anyway.  I was more aware of any traffic coming around us wouldn’t leave as much space as I’d like,  however most traffic slowed down to have a good look at us!  I was slightly aware of coming out of turnings (especiallyturning right) as it did take a little while to get going.  However this was just a case of getting used to how long it took you to get out and waiting until there was enough space, rather than a problem with the bike. It was quite heavy when fully loaded as expected, but nowhere near as heavy as you would expect.  It was hard work going uphill; however the gears were really effective and helped massively.  There was also a ‘hand brake’ which helped when waiting to get out of turnings that were on a hill, as it stopped the bike rolling back.  The children were delighted to be in the cargo section,  and it was such a shame that the weather was so rotten while we had the bike and that we couldn’t go out on it more.  Once I had got used to being stared at (and laughed at by some children!) I absolutely loved it.  The children would wave at people and most people waved back and smiled.  It’s a very well-constructed, sturdy bike. The wooden cargo section is very well built,  with no rough edges to catch skin and clothes on.  It is very expensive and therefore I think would be quite restrictive, however for the workmanship, construction materials etc. it isprobably a fair price.  I think if your children were very young and you live in a flat area or near a large park you would get much more use out of it than I would be able to, making it much better value for money.  I’m not entirely sure if it could be improved in any way.  It is obviously quite a tried and tested design in other countries, however I would like a battery pack on it if I bought it – which is available but at a higher cost.  The only thing that would perhaps make it a bit more useful is if you could detach the cargo section and front wheels, so you could perhaps put that section in the back of the car and put the main bike on a bike rack and then you could transport it to the seaside or park and get much more use out of it.  It wouldn’t make my life easier as it is, however, if I didn’t have access to a car and my children were a bit smaller, it could probably be invaluable.  I wouldn’t buy it personally as I would have a very limited area that I could ride it as our road is on the middle of a hill( the immediately surrounding roads are quite flat but if you want to go anydistance it is quite a long hill up or down either way).  If things were different and my children were younger and I lived in a flat area (such as by the seaside or near a large park) I would LOOOOVE it!  I would definitely recommend it.  The kids absolutely loved it, which meant that I loved it too.  My friends came around to have a go and the neighbours came out in force when I loaded the children up.  Both the children and I loved this.  My other half, Ian, also went out on it with them and he had a great time with them.  It made bike riding a family experience, as at the moment, my girls can’t ride their own bikes and we don’t have seats on the back of our bikes to take them with us, so Ian tends to just for a ride with our son on his own.  Gill Robbins – Harry 4 Years, Rosie and Annie3 Years

I loved it as soon as I saw it. It somehow works even though it has an unusual look.  The instructions were pretty straight forward.  It was easy to ride without the kids but I felt a bit silly.  I did find it surprisingly easy to ride with the kids in the cargo section.  It was stable and secure and they were safely strapped in.  I was totally confident when out and about.  We loved the whole experience, cars moved over to let me pass, and we had plentyof looks and waves.  It is pretty heavy with 3 or 4 kids in it but you can get a good speed going on it.  The gears were quite good and helped loads.  The kids thought it was wonderful.  It seems well made and good quality.  Value for money would depend how much you would actually use it and where.  I can’t see how it actually could be improved as its pretty effective as it is.  It would make myl ife easier if I lived somewhere where I could use it quite often. (It’s quite hilly where I am).  Seriously, if I could afford it I most probably would buy one.  I don’t know anyone that has that amount of money but will tell a few of my friends.  It is a great idea.  They should think about maybe getting them in the main parks in London  i.e. Hyde Park etc. on the bike hire scheme or weekend hires for family.  It was great way to have a bike ride with all your kids.  Sophie Gent – Poppy 4 Years and Florence 20 Months

My initial impression of this was it looked good and fun to ride! The style is different and funny to look at.  The instructions on how to use the bike were clear and easy to follow.  I didn’t ride it without the children, however I found it hard taking it out of the garage where it was stored as needed some help to do it even without any children.  When riding with the children it was fairly easy;  although I felt that I couldn’t have as much control of it downhill. The instructions booklet claims it to be easy around bends however it is not on the tight ones.  As long as the children were safely fastened I felt they were secure, however the fastenings were not long enough for taller children as we couldn’t strap my friend’s son that is under 5 years old but tall for his age.  I was slightly nervous when out and about on busy roads as the cargo section is quite wide and in UK we haven’t got as many only bike’s circulation areas.  It could help to have a small rear view mirror.  It was okay on flat areas, but hard work up hill but perhaps I didn’t use the gears properly.  We did enjoy using this bike though thoroughly!  It was good fun,  good work out and attracted a lot of attention from passers-by. Children loved it!  Quality looks strong and resistant.  The harnesses for children are not great, as can’t be adjusted as easily and not long enough for tall children.  Using this could make life easier if I was living in a highly populated area with parking restrictions.  It would be great for cities.  I would definitely consider buying one if I had the spare money to do it.  However I personally think that if they were available for rent on Parks, they would be really successful.  I would definitely recommend it.  It was fun to use;  it is practical and fairly easy to ride.  The lock feature is a great idea and in general does what it says.  Maricela Tomlin – Yasmin 4 Yearsand Alexander 2 Years

Both the children and I loved this. My other half, Ian, also went out on it with them and he had a great time with them. It made bike riding a family experience, as at the moment, my girls can’t ride their own bikes and we don’t have seats on the back of our bikes to take them with us, so Ian tends to just for a ride with our son on his own.