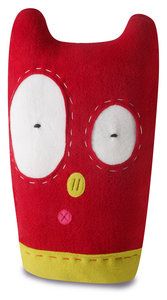 His unusual eyes and bewildered look make him instantly loveable, but you can’t help but wonder, how far can he see with those eyes?

Designer toys from France, inspired by illustrator Marie Joxe-Collins. Beautifully detailed, Pooki and his friends are sure to bring colour to any room. The toys are made of the softest fleece and are sure to bring a smile to the face of any little boy or girl.

THIS PRODUCT IS NO LONGER AVAILABLE

When the Pooki arrived I was
surprised at how big it was and wondered if the girls would be too small to
play with it properly. Eve (3) instantly took to the Pooki. Pooki although bigger than I
had expected turned out to be the perfect size for carrying about and cuddling!
Eve thought Pooki was very funny to look at and came up with many stories about
the way he looked. Poppy (1) also really enjoyed playing with Pooki and
particularly enjoyed the texture. She has taken to having him in her cot and
uses him for cuddles and as a pillow! Although the toy was more suitable for a
child of Eve’s age, 3 years. I was happy to see that both girls enjoyed playing
with the Pooki and that they both got something different from the toy. Eve
enjoyed making up stories as to why Pooki looked the way he did. She
particularly enjoyed playing ‘doctor & nurses’ with the toy! I am not sure
if that is necessarily educational but she got a lot out of role playing &
using her imagination. Excellent quality, the teddy is very soft. The fact that
the Pooki can go it the washing machine is also a huge plus. This is a striking
toy which was loved instantly. Nicole
Wert-Wightman – Eve & Poppy Ages 3 & 1 Years

I was very impressed with this when I first saw it, the size
and quality of Pooki is fantastic. It’s great for both of my girls to play with
and carry, I didn’t think Poppy would be that interested in it but she loves it
too, it certainly looks very different to any of their other toys. The teddy
has been used as a pillow, a companion when travelling and he even sits at the
dinner table with us sometimes! We always make up stories about the bear and
play role games with him and the children, they love it! I found this easy to
wash which was great because he has been played with so much and was starting
to look a little grubby. But after washing, the bear looks and feels great. Fabulous
price and id highly recommend great fun and looks very original! Harriet Ray – Belinda & Poppy Ages 1
& 3 Years

When
I opened it my little one started crying and running away. It took him a few
minutes to settle down and hold it. To me it doesn’t look like a soft toy I
would go and buy, it looks very different to most of the toys out there. After
a few weeks use this toy now lives in his play cot now and we use it as a
pillow. He doesn’t play with it but sometime uses it as a pillow or next to his
head when going for a nap. I think the quality of the product is OK but it’s
nothing special in my opinion. I don’t think I would have bought it, as it did
scare my child at first. Danka
Bakic – Stefan 23 Months

This is a striking toy which was loved instantly.