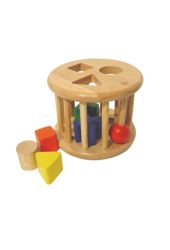 Help your child to learn all about shapes with Bigjigs Rolling Shape Sorter! Providing hand/eye coordination for your little ones safely. A traditional hard wearing toy that is guaranteed to last and provide your child with fun learning and development.

My first impression of this toy was, wow! A shape sorter! The packaging was just right wasn’t to big the shape sorter fitted in just right. The size of the toy is perfectly suitable for little ones; I also liked the style of it a lot because I am a fan of wooden toys. Jack has never played with a shape sorter before but he really likes this toy now after trying it and he keeps on going back to it. It’s fabulous; I have no concerns at all about letting my child play with it. Jack will sit and play with this toy all day; he will also try to fit all of the shapes in different holes, so that he can see exactly where they do fit. I think the toy is simple enough for my child to play with without losing interest. He will also roll it across the floor and he tries to push his cars into the holes too. I think this is a top quality wooden toy and its also great value for money! Jack loves this toy; it has helped him learn all about shapes too! Zoe Butcher – Jack 1.5 Years

A Colourful, traditional toy which is solidly made. My 1 year old is able to handle the toy easily. It is neither too light nor too heavy. It is solidly made. As well as using the shape sorting element. My son also enjoyed rolling it across the carpet as it makes a noise with the shapes inside. He had slight difficulty with the peg that releases the shapes. Although by watching me, he had the idea of how to get it open, he didn’t have the strength/dexterity to open himself. The toy can be used as a shape sorter, a rolling toy (we rolled it between each other) and improves hand/eye coordination. Although my son could not get the peg open to release the shapes, he spent a lot of time trying as he likes to work out how things work. The only problem I had with this toy relates to the shapes that go in the sorter. They are made of a softer wood than the main frame and the paint/wood tended to splinter slightly. My son likes to put things in his mouth and chew so this could have helped the problem along. I have taken away the yellow triangle because this problem was particularly bad on the straight edges. Splintering was only slight but I didn’t want to take a risk. Also, the ‘L’ shape was the right shape/size to escape the frame so we often had to rummage through the toy box to find it as it had often fallen out. Toy was used in many ways – shape sorter, roller, drum (with hands and a wooden spoon), something to stand on and try and balance on against the sofa (supervised!). The Bigjig had a lot of uses as well as the obvious ones. My son was able to use his imagination with the toy to create new games. The toy does help with hand/eye coordination. Jack could select a shape and try it in each hole until he found the right one (with help). The Bigjig can be used to learn colours as each shape is a different colour. We didn’t use nursery rhymes or counting with the toy. Jack wouldn’t be able to play with this toy in the traditional sense without help at his age. It did encourage interaction with the adult who was helping. He wasn’t able to work the peg to release the shapes. He could create his own games with the toy without adult help and as he develops and practices, he will learn to use the toy himself as it is meant to be played with. It is better and sturdier than the plastic shape sorters we already had although the price was on a par with them. I would consider buying this, especially as a gift for a child around my son’s age. Traditional toys last longer and are more tactile plus I know that the toy has more uses than the obvious ones. Overall, I am pleased with the quality of the toy and the amount of uses it has in encouraging my son’s development. I would recommend this toy. Jane Williams – Jack 1 Year & 3 Months

Looks good fun and is built very well. The toy is suited to older children due to the smaller size pieces. My children love the toy to sort shapes, but have not really rolled it around. This toy has provided my children with hours of fun and both of my children keep going back to play with it.  I had no concerns what so ever and think the age range is appropriate for this toy. The children like to sort the shapes once and then stop playing with the toy. However they do return to play after a short time. The only down side is when rolled one of the shapes comes out every time. My Childrens coordination has really improved. At first I had to help with the shapes, now they do it all on their own. It’s great to see development. The quality is excellent and well made to last a long time. I think the price is excellent for a wooden built toy. I would buy this product over other shape sorters, as it is so well made that it has survived the squabbles of twins with no evidence of damage. I have already recommended to others as it’s such a good product.  A wonderful toy that the children love and has helped them develop. It should be a toy found in every toy box. Hodnett – Katie & Joshua 19 Months (Twins)

top quality wooden toy and its also great value for money! Jack loves this toy; it has helped him learn all about shapes too!