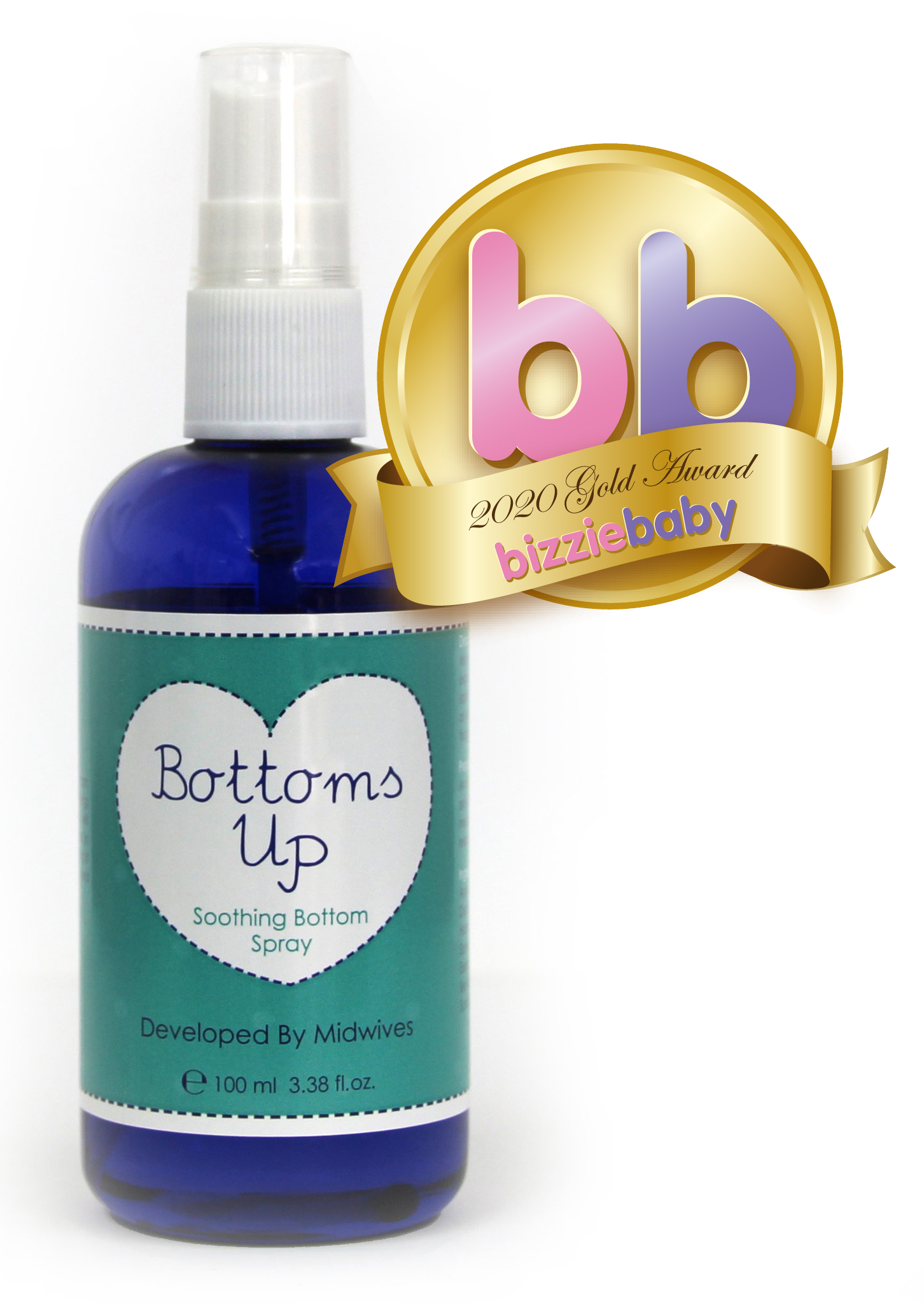 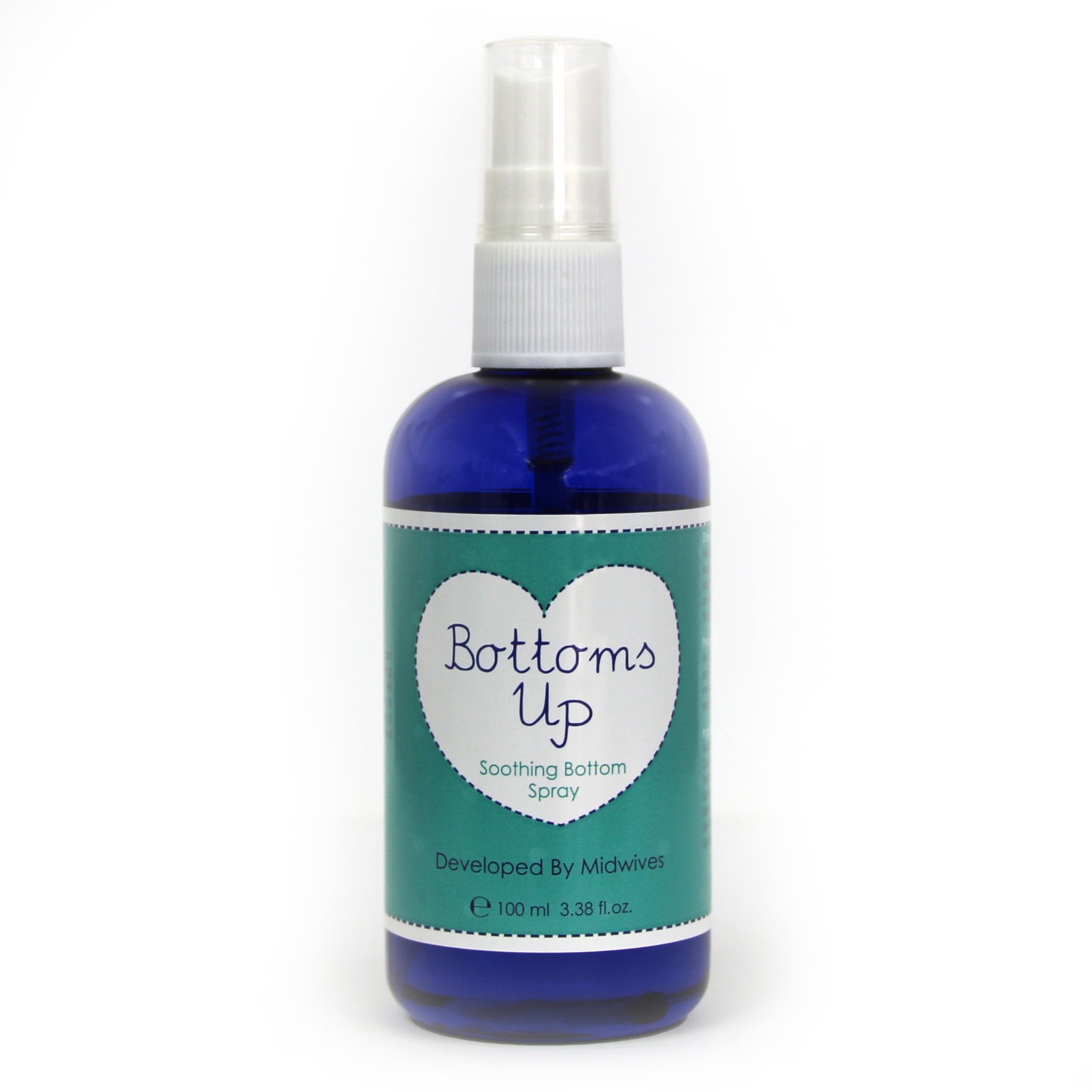 Bottoms Up is an essential product to keep in your hospital bag for use following childbirth. Giving birth is amazing but it can be tough on your body due to stretching, bruising and swelling of the perineum. Bottoms Up provides instant relief to your sore vulva and perineal area following childbirth by soothing, cooling and calming the area.

Pretty basic packaging, large box for a small bottle. It’s a great idea, easy to use and discreet. Instructions easy enough to follow.  I thought the bottle design was a little basic. Very easy to use just spray and go. This certainly helped sooth sore vulva and perineal area after giving birth. I can’t say that it helped to heal stitches but definitely helped to relieve the area.  This was especially good after using the toilet. Once the area was cleaned the spray helped to ease the sting. the spray helped cool down the area and make the swollen area feel better. I used 3-4 times a day especially when I used the toilet as I felt it help relieve the area. I noticed an improvement after using for 2 weeks (however I didn’t start using until 7 weeks post). I did like the aroma. Very lavender but I like that aroma and made me feel less conscious of any down below smells as I struggled to feel clean down there so this really helped with that. Big bottle (maybe too big I only used half the bottle and is not something I would probably pass on for a friend to use).  I really liked the cooling feeling it gave me after use.  I would buy this as it worked well and made me feel better. It worked well for me and I would recommend based on my own experience.  Great product, gives instant relief from the effects of childbirth, I also recommend popping it in the fridge for extra cooling. Nicola Kelly – Ellis 3 Months

Really nice packaging, very attractive and reassuring to know it has been created by midwives. I think it is spot on!! I had a home birth and the home birthing midwives we’re allowed to give me medical honey to help heal my tears but I know this isn’t the case if you have a baby in hospital. To be able to use a spray like this is even better because it is refreshing and soothing as well as protective. Instructions very easy to follow.  Very good aesthetic design – pump needs some work! You have to hold the bottle upright and pump it a few times first in order for it to work horizontally or upside down. It’s not an issue but it does waste a little of the product. I had 3 tears, one was 2nd degree, and lots of bruising. This spray was very relieving of the symptoms and I particularly like that there is no limit on how long you can use it for.  I think it was effective, yes. By making the area more comfortable I feel I recovered faster. This definitely gave relief when you have had stitches. This also helped with bruising and swelling and it gave me a lot of comfort. I did suffer quite badly with Haemorrhoids for a few weeks and the spray helped although I used it in conjunction with a medical cream. At first I used it several times a day but as I began to recover I only used it on occasions where I felt I needed it. I have stopped using it now. The relief was immediate! I’d say I began to notice a significant improvement in my tears and piles after about a week. I did like the aroma it is very refreshing.  I think its excellent value for money. I loved the instant feeling of relief from the constant pain, swelling and stitches was just heaven.  I would definitely buy it.  I would recommend.  In fact I’ve already bought a bottle for my sister in law who is due in June!  I loved the fact that it was designed by midwives because I feel they are just about the only people on earth who understand universally what a woman goes through after birth! The natural products make it feel safe to use in such a fragile area and I was glad to have something that I could use and when required rather than have a maximum number of uses per day. Above all though, it’s just a really effective product that genuinely brings relief and refreshment.  Louise Blackmore – Joel 3 Months

Love the packaging and label, seems very nurturing. Great idea and much needed after giving birth.  Very easy to follow instructions.  Really liked the bottle design.  Was also very easy to use. I received a month or so after giving birth, so can’t comment on the effects directly after birth, but helped with the discomfort I was having at the time from my year and graze, also help with the discomfort of a Bartholin Cyst that developed in the New Year.  This certainly helped relieve cuts, etc. after giving birth.  Most of the after birth swelling was dissipating when I used this, but help with the swelling of the cyst. Used it when at home after going to the toilet or when feeling particularly sore/dry. Fairly instant relief and improvement in a day or so.  I liked the aroma as fresh and non-offensive. Good size bottle and it worked, not sure so would buy at that price initially, but if we were to have another child I would buy as it works well.  I loved the soothing aspect it delivered when a bit dry in that area. I would buy this if I were to have another child.  I would recommend as was very nice and comforting. Helped post birth and especially. with cyst, very soothing and a decent size bottle and I liked the smell and the packaging. Helped with graze even though a month or so post birth, definitely helped with dryness, swelling and pain caused by cyst. Kate Andrews – Leilani 3 Months

I would buy this as it worked well and made me feel better. It worked well for me and I would recommend based on my own experience.  Great product, gives instant relief from the effects of childbirth, I also recommend popping it in the fridge for extra cooling.