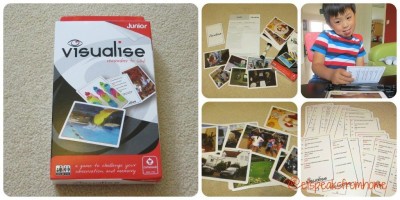 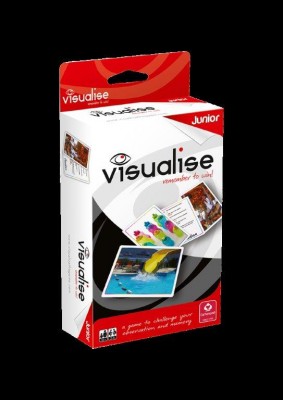 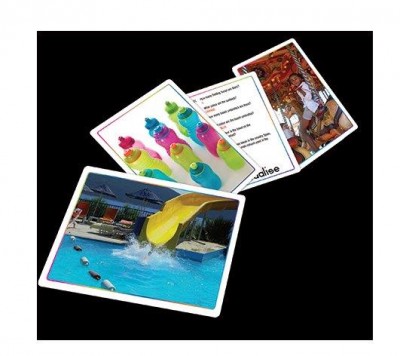 A great game for children to play, look and remember as much as possible on the cards and then try and be prepared to answer the questions!
Box Contains -1 x 31 play cards -1 x cover card -1 x 30 second timer
Ideal for 1-8 Players

This game looks great. The packaging was perfect for the
game. I thought the concept of the game was brilliant. Ryan understood the
concept fine. I think it is a great idea as it gets kids talking to each other.
Plus it helps with their development. It was very simple for him to play
without losing interest. It offers great value for money. I think the cards
could be doing with being a bit thicker though. I would consider buying this
game; it is great to buy and put away in case kids get invited to a birthday party. I would recommend this game; we love this game; great
for taking on holidays too. Laura Pyper – Ryan 10 Years

This card game does have nice visual pictures; it looked
like a good game. The packaging was good although when asking my son he said it
looked a bit boring also when I asked him what he thought it was he said a
grown-ups game. Maybe brighter colours would make this more appealing to
younger members of the family. The instructions were easy to understand however
my son did struggle. He did not understand the concept to begin with; it took him
a while. I feel it was too advanced for my son’s age range. I also played the
game with him and his friend on another occasion and still it was tricky for
them both. His friend is 8 years old. They most definitely need an adult to
take part and is not a game they could play alone. Once he had the hang of it, it
did keep his attention however it took some work but I do think this is
something that could change if the colours were more vibrant and the words were
easier to read for his age range. This game does help with their development.
The quality of the cards is very good! Nice shiny cards, good wearing and good
size! For £4.99 for a game you can’t really go wrong however if my son engaged
more with it and looked more child friendly I would personally pay more. I
would have to agree with my son visually it could grab you so much more. It’s
the only thing that lets it down really as it’s a good concept. If changes were
made I would buy this game again as I have a 5 and 1 year old so as they got
older it would come in handy for them all! As it is now I would offer this set
to friends and ask them to test it on their children to see what their ideas
were. Over all it’s a good game but I feel some children would be keener than
others. It was challenging for my son, but overall a good concept. Amy Owen-Drew – Henry 7 ½ Years

This looked like a very interesting game. The packaging was
nice; not very appealing to kid’s though. The concept of the game was very
good; it was easy enough for me to understand. Adam understood the concept too;
he was able to tell his friends what to do when they came round. I had no
concerns with him playing with this game; I think the age this starts at is
about right. I think it is a great game; it gets kids talking to each other;
you can have up to 8 players so this is a great family group game. It
definitely gets their mind working. This game is easy to play; it kept the
attention of 3 of his friends for some time anyway. The quality of this game is
great and offers great value for money. I like the fact that it takes up no
space at all so ideal for taking away on holiday. It is fun too when played in
a group. I would consider buying this. I have been asked about this game and
have recommended it to them. It is a great game to get kids talking and
interacting with each other. Sharon Morris – Adam 9 Years

I think it is a great idea as it gets kids talking to each other. Plus it helps with their development. It was very simple for him to play without losing interest. It offers great value for money. We love this game; great for taking on holidays.