Saved In Nappies - Re-Usable and Nappies 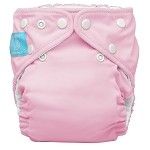 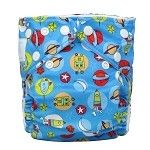 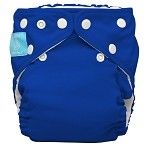 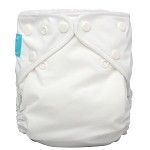 My first impressions were that the nappies were nice and brightly coloured, they did look a bit complicated to use at first glance though. I personally find using reusable nappies less convenient for me, but only due to the washing of the nappies and also having to carry around dirty nappies when out. The texture of the Charlie Banana nappy is very soft and so is the insert. I thought at first sight that the texture of the outside waterproof cover might be hard but infact is quite soft. These looked very comfortable on both my babies although the nappy does look much more bulky than a disposable nappy. I have two babys (twins) one being short and chubby and the other is long and thin. Due to being able to adjust the size of the nappies they fitted both babies well. Didn’t have anywhere near as much leeks as disposables nappies with these which was great. It took me awhile to be brave enough to use these at night, but I am really glad I did. The nappies lasted all night on most of the nights I used it. I felt quite confident having my boys in these while out once I had used them a few times at home so that I knew what I was doing. Very easy to put on baby using poppers and to change the fit. Only negative point would be the instructions in the packs were not as clear as I would have liked, so it took me a while to work it out. Once I had it was easy. Washing instructions were very clear. They washed very well and dries quickly too. The product is environmentally friendly. I do like the idea of fewer nappies in landfill much better for the environment; however I don’t think it is the most important thing for me. Most defiantly initial lay out is high but saves lots of money in the course of a babies nappy wearing years, so I would say that it is value for money. I haven’t used reusable nappies before so can not comment on other kinds, but I was very happy with using these ones and would recommend to anyone asking. I loved the bright colours of the nappies and how much money they save compared to disposable nappies and my babies seamed very happy in them which is the most important thing. Lucy Thomson – Baby Callum 3.5 Months

I think these are fantastic, they are also very eyecatching and colourful. Whilst I’m at home the reusable nappies are convenient, but when out the nappies are a lot more bulky to carry especially if I’m out for a few changes of nappies and also having to carry wet inserts. I loved the texture of the nappy lovely fleece and soft insert and the outer nappy is a lovely sretchy material. I loved the outside waterproof texture of the nappy it is easy to wipe clean and will be ideal if the weather is hot in the summer when the baby will be crawling. At the moment the nappy looked rather bulky with the baby only being small and being on the tightest fasteners, but as he grows it should look more comfortable. The reusable system fits the baby very well; there is no visible sign that there is an insert in the nappy. Keeps the baby fairly dry aslong as you change regulary when I first used the nappy I left it on for about 4hrs as I usually change before every feed, and it was very wet, but after getting a better routine I was much happier. At first I used the reusable insert, but changed to the disposable insert the longer the baby slept, as I found it soaked into disposable insert better so keeping the baby dryer than the reusable. The nappy is very reliable it fits the baby well with no leaking! At first it was difficult to fasten the nappy as there was so many studs and trying to get them even took quite a few attempts to get it right, but after the initial try it became much easier.Tthis is a great environmental product as it is stopping me using at least 6 ordinary nappies a day, and once you get used to them, there as easy as disposable nappies. Overall I’m very impressed with the product and will get the next sizes available when I need them. once I’d got used to the product, which at first you’ve to stick at, as it could be so easy to think its going to be to inconvenient, it has become part of my daily routine and still get so much enjoyment at putting the nappy on they are so colourful and reliable.  Kate Sparkes – Baby Charlie 10 Weeks

I loved the brand name, the nappie system looked exciting, and it came wrapped in a bow and was really colourful. Personally, I find using reusable nappies less convenient to use because they take longer to assemble, put on and then they have to be washed once soiled. So for me, disposables are much better for my lifestyle. The texture feels nice; it’s soft, smooth, warm and very luxurious. The liner didnt feel as nice. The outside has a nice texture for a waterproof cover as its still soft material which feels like clothing rather than having a harder plastic feel to it which is what i expected. it looks snug and soft and very comfortable on baby. It fits ok but was finding i could not do the poppers up equal on each side; one was done further than the other. And the liner was too wide for the nappie, i had to tuck it in once it was on but the nappie fitted nice around her tummy and legs with room and was not resrictive. I was expecting the night time nappy to leak but it didnt at all, i was really impressed. Using double inserts made the nappie quite bulky though. It was really reliable and it made me confident not to keep checking her bum every half an hour. It was a bit tricky the first few times fitting all the bits in it then doind it up but it was easy enough just had to make sure the poppers are in properly each time. once they are in the washine machine its just like any other washing and very easy but i had to put gloves on to take the inserts and linners out,  then they had to be stored if i could not wash them straight away. It’s exceptionally good for the environment and that is important to me as I recycle. I think these are excellent value for money…initial outlay but far more cost effective in the long run.  I enjoyed reviewing this product; i loved how nappies suddenly became fun and just as comfy as clothing. Great choice of colours and materials and an excellent effective nappie system! Lesley Holbutt – Baby Miley 7 Months