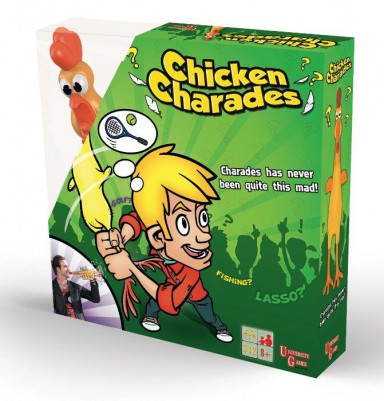 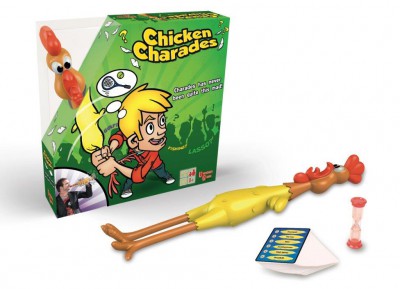 The lightning fast game of Chicken Charades! You only need to know two things – you’ve got to be fast (you only have 10 seconds) and you have to use the rubber chicken to act out your word. Be the player with the most number of points to win the game!Age: 8+ yrs

Looks
fun and easy concept for young and old. We liked the way it was packaged so
that the chicken was visible. The rules
are very simple and easy to follow. My son
did understand the concept even though he didn’t understand all of the words on
the cards. This game is aimed 8 years plus but it also appeled to my 6 year
old. They didn’t want to put this game
down. Short, timed rounds so kept their attention. Fires their imagination and
helps their lateral thinking. Encourages taking turns. They even try to act out
their own words. They love playing with the rubber chicken. This is a great quality game. Quite expensive for a rubber chicken, die,
timer and cards. But good entertainment value. I like that the game is quite
versatile, if the words on the cards were too difficult, the children thought
their own up. We had 3 generations playing and everyone enjoyed it. I would
recommend. Great fun for the whole
family. Rachael Whotton – Isaac 8 Years

Arrived
well packaged and you could clearly see the game. Instructions very easy to understand. My children understood how to use the game. This is suitable for children 8 years plus
which is ideal. The game is challenging
in places as the children had to think how to act it out. My children enjoyed this game. This game certainly helped them to use their
imagination. This is a fairly simple
game to use but if the cards were too difficult for them to use we would just
change the card. Quality of game is
good. I think this is a bit expensive
for what it is. This is a good game and
nothing we really liked or disliked about it.
I personally prefer the old style board games around the table. However, this game is entertaining. A good game but some options are
challenging. This was a fun game, made
us laugh and entertained us all. Sadie King – Morgan 10 years

The
game looked fun but the box and the items felt cheap and not well made. With the
packaging it was good that you could see the chicken head as the children were
excited to play. The concept seemed good and was easy to understand for an adult. My son struggled to understand why he
couldn’t keep the cards. A lot of the things on the cards were really difficult
for the children to act out with or without the chicken. My children got incredibly frustrated that
they didn’t have time to think of what to do and act it out. We decided to use the egg timer twice per go
but really that wasn’t enough time for them either. They have to first recognise what the card is
asking them to do, then think of what they’re going to do and do it in a very
short space of time. I feel this
possibly helped him in taking turns, but he was already good at that
anyway. The children became increasingly
bored and frustrated and mainly enjoyed pulling the head off the chicken as it
did not screw on very well. I feel it
would be better to play the game without the chicken or timer to avoid the frustration
and distraction but then it would just be a box of charades cards. My children also enjoyed running around the
house with the chicken and pulling its head off. The quality was quite poor;
the cards were thin and stuck together.
When you pulled them apart it damaged the print. The chickens head did not screw on to the
body very well so kept coming off. The concept was frustrating and would prefer
to play charades without the chicken. Jane
Woods – Ethan 9 Years

We had 3 generations playing and everyone enjoyed it. I would recommend. Great fun for the whole family