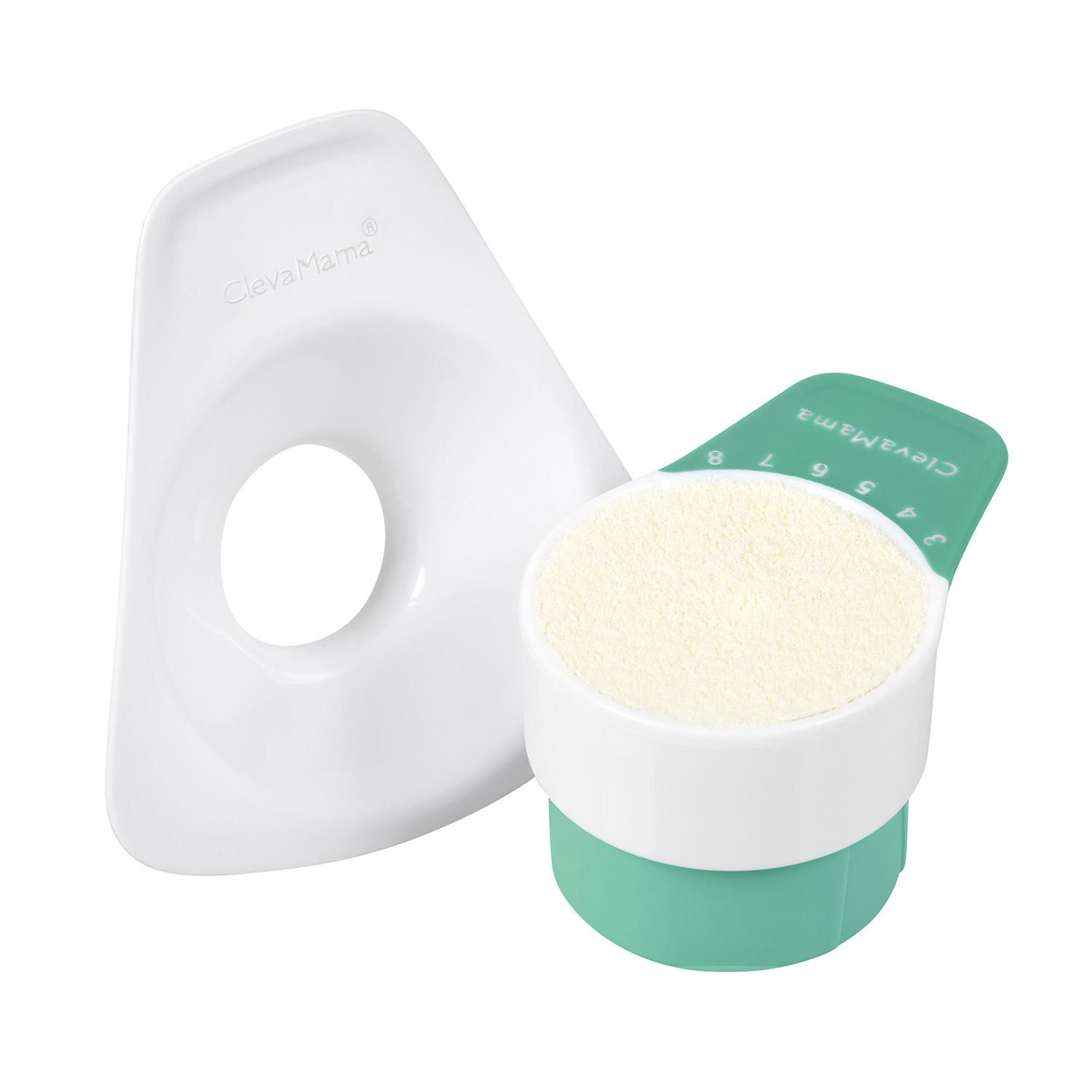 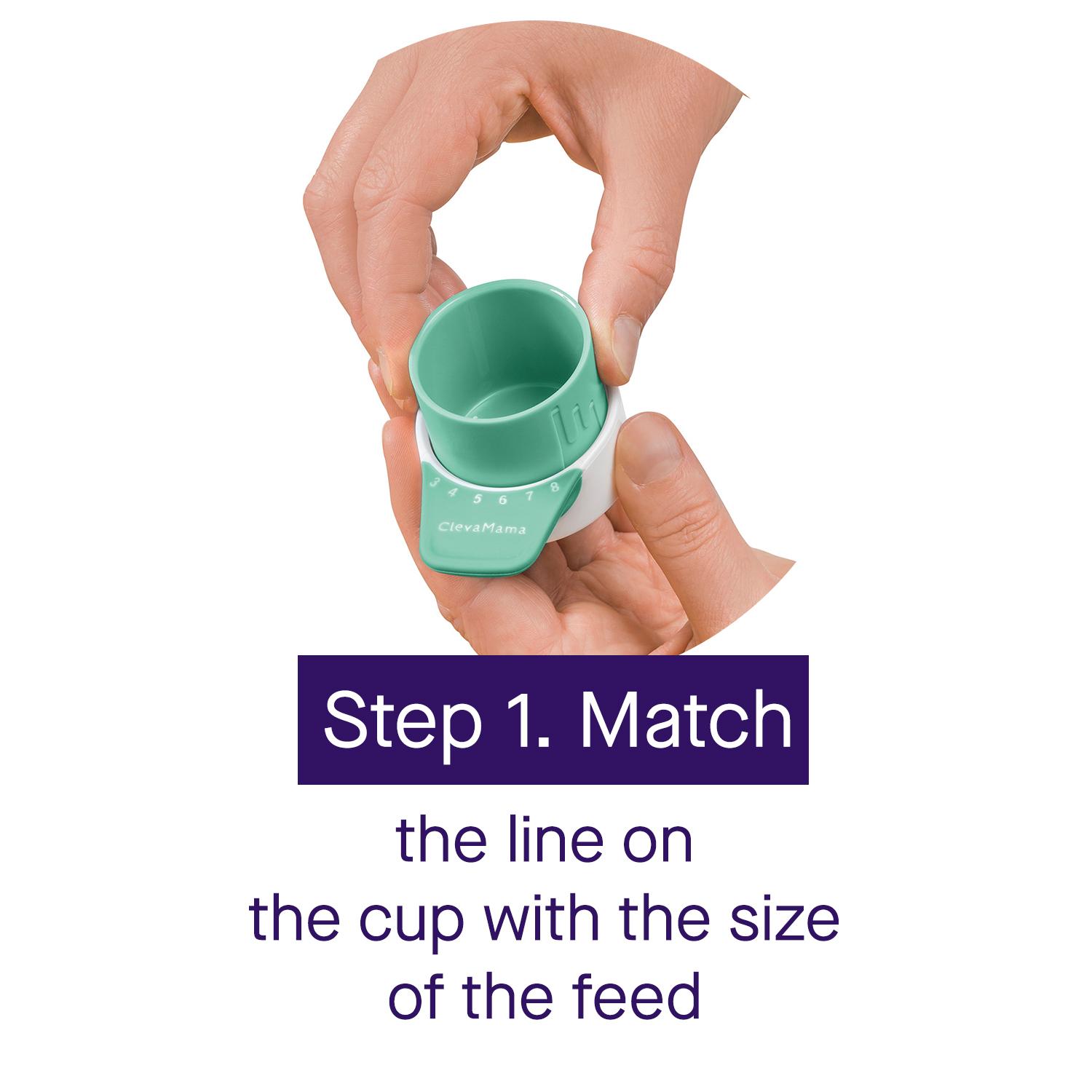 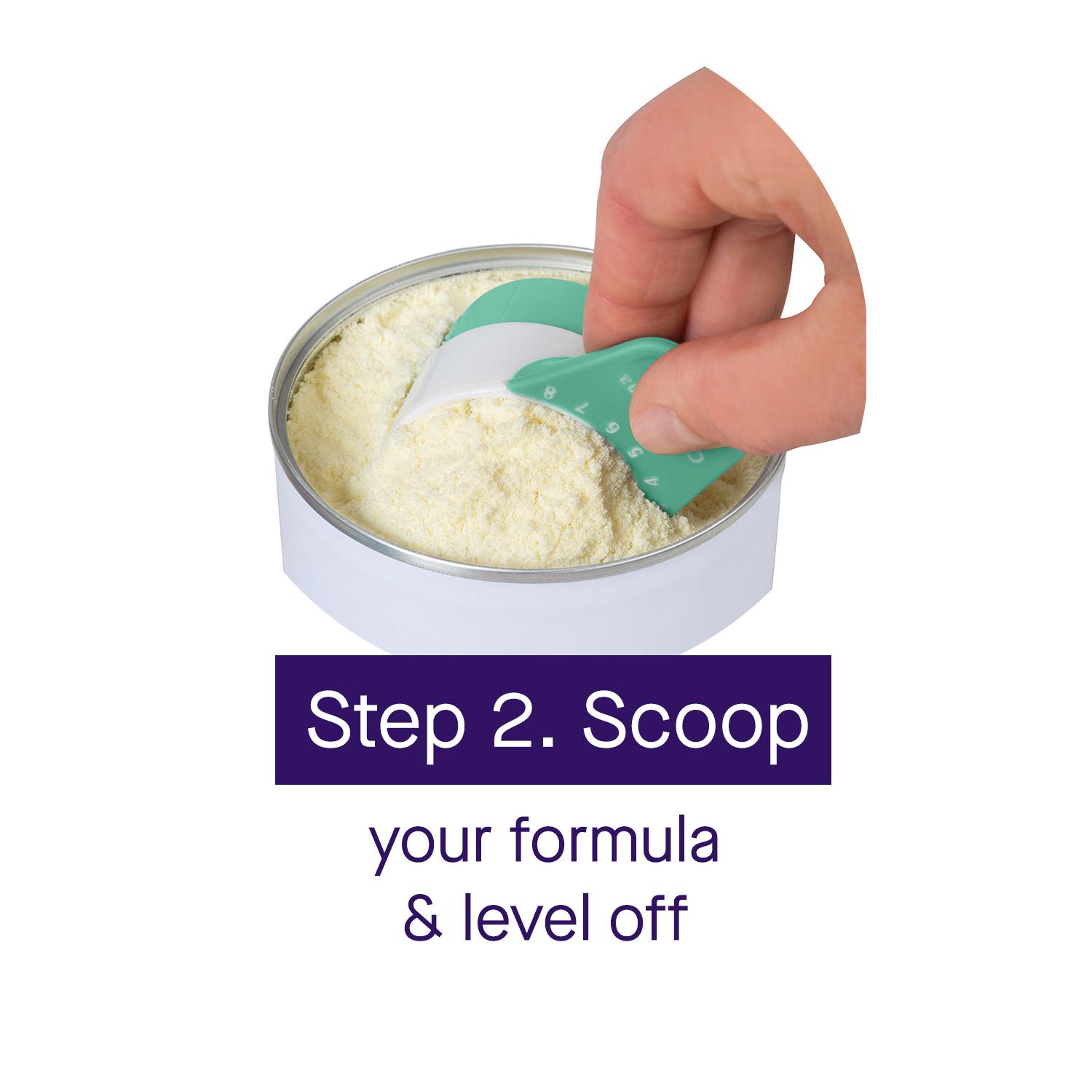 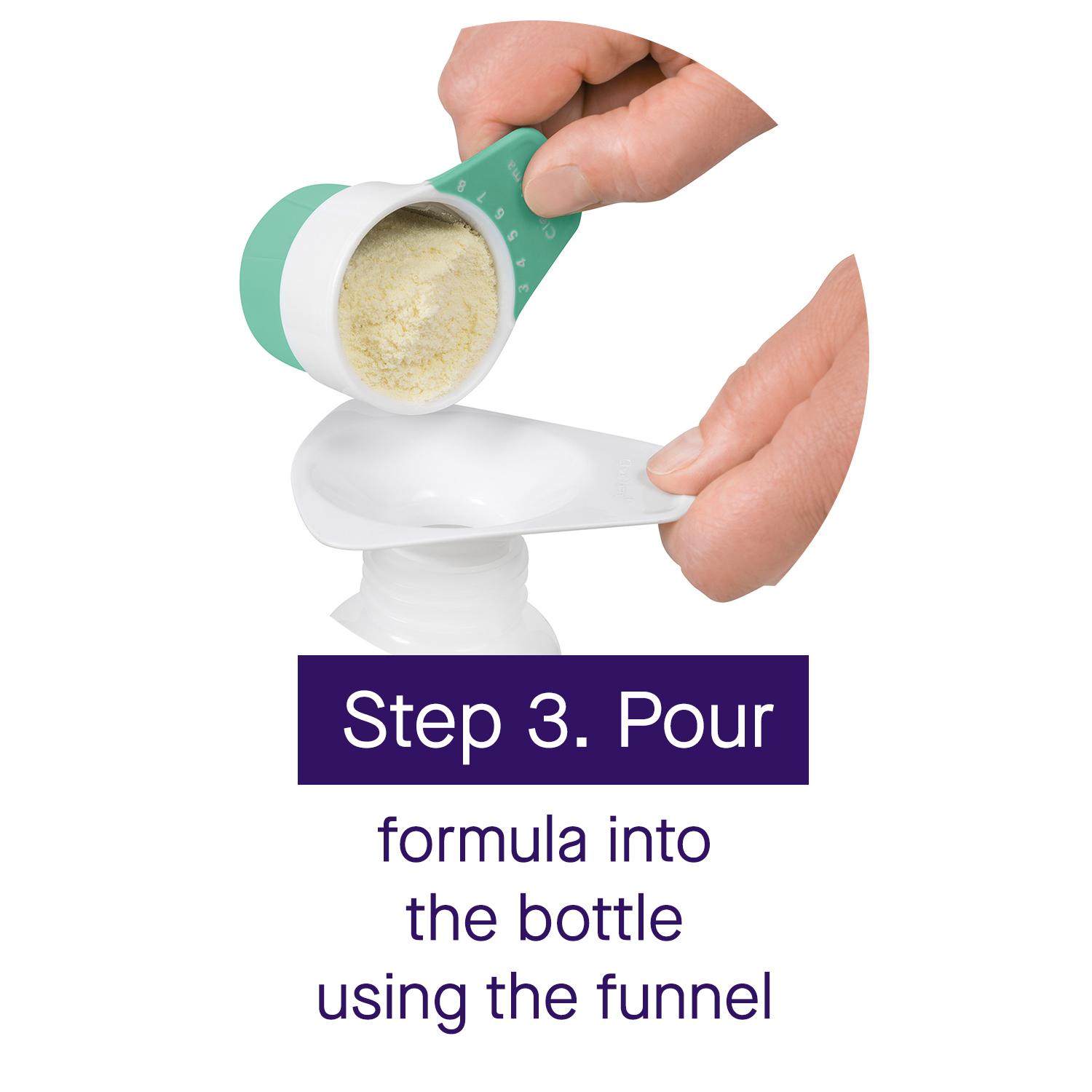 Laboratory tested and proven, the ClevaScoop® prepares the most accurate feed for your baby, saving you time, money and most of all, patience! Reduce the health risks associated with over or underfeeding your baby by using the ClevaScoop®.

One easy scoop action is all it takes to prepare your baby’s bottle the right way every time.

The patented BPA-free ClevaScoop® was developed in collaboration with the world’s leading infant formula research lab and is proven to be more accurate when tested against all other formula scoops.

Compatible with all leading brands of baby formula with 9cc/9ml scoop. Why is ClevaScoop® more accurate?

3. No more clogging from steam

My initial reaction was “all that?! Just for powder?” It seemed like a lot just to scoop out formula. I like the box though- (the packaging made it look more appealing!). In theory this product would completely eradicate the need for the scoop that comes provided in the formula tubs. I thought it sounded useful. The instructions were helpful as I wasn’t sure where to fill to. I don’t remember reading about using the side of the white piece to level off the formula; I just worked that out on first use. I really love how good it is at levelling. The concept sounded good but the rotating scoop measure at the bottom was difficult to click in to place on the smallest setting. It was very easy to use, and much quicker to scoop just one amount into a bottle than counting in (what now seem like tiny) scoops!  It’s definitely a time saver. It allows you to scoop & mix! A difficulty I had was: if you want to make a different quantity of milk, you need to remember to change the scoop level before pouring into the water. Also you cannot use this product one handed. Which to me is its biggest downfall. I feel like it does what it says. It does allow you to scoop the correct amount every time, but I’m not sure about no mess. Currently there is sticky granules stuck to the handle of the scoop and not 100% of the formula runs through the guide/scraper. It’s reassuring they have researched it against all other brands yes, but I feel like all/most formula scoops are one and the same, so it doesn’t make me more confident. I used this once a day.  I think it sounds expensive but for the amount you use it and also considering it’s cheaper than a tub of formula I feel it is value for money. I loved the leveller- by a long shot. I don’t think I would buy it for myself as a consumer, but I would consider buying it for someone for their baby shower or a new mum gift. I would recommend it if I know they are formula feeding. I think it did what it was supposed to, but as a low user of formula (one cup a day) I find it would be a bit extreme to say I couldn’t go without it. It’s cleverly designed and anything that helps a tired mum is a win in my book!  Overall I found it quick and easy to make up a bottle. It came in handy when measuring to take formula out with us, as well as to make ready there and then. At first it seemed like overkill or not necessary but I soon found I relied on it to provide me with the right quantity. I like the design although having it made me worried I would lose the other side scoop (something else for me to remember where it goes!) but I haven’t lost it and I don’t mind storing the two other pieces inside the box of formula. I think the scoop handle could be just slightly larger/longer to make it easier to grip/lift out from the bottom of the tub but overall a really interesting product; I pleased I had the opportunity to try it out or I would never have believed how much easier it could make it. Hannah Holt – Florence 5 Months

Nice design, nice colours, attractive packaging. Great concept, and could make making a bottle much easier as the scoop number gets bigger with age. Instructions are important as not everyone may understand how to alter the scoop size/ number. They were straight forward and easy to understand. However, they didn’t explain how many grams were per scoop. It’s a cute chunky design and the colours are baby friendly. Very simple to use. Not too many pieces and easy to change the scoop size. I’m a bit of a geek and compared 5 scoops from my cow and gate plastic spoon to the 5 scoop measurement on the ClevaScoop and unfortunately it didn’t match. There wasn’t as much formula in the ClevaScoop as what there is in 5 individual scoops. If it matched the amount of powder I would have when using the spoons in the formula box then I would agree yes. But as above, when I compared it didn’t match. It was out by about half a Cow and Gate scoop. This meaning Austin’s formula would be slightly less (in grams of powder) per feed if I used the ClevaScoop. It is important this has been developed in collaboration with the world’s leading infant formula research lab. But I suppose I don’t know which is right now as the ClevaScoop and formula scoops don’t match. I’m inclined to stick with the formula scoops though as it’s worked for my baby so far. I tried this out a few times, but when I tested it against the other scoops and as it didn’t match I didn’t commit to using it regularly. If I was confident with how many grams of powder I think it would be very good value yes as it’s a great concept. The idea is great and I wish it matched the formula scoop size as I would very much use it. It simplifies and quickens the process of making my bottles up. I would not buy this because I know the size isn’t right for my formula. It’s a great concept, it looks great and it’s simple to use. Just a shame about the powder amount. Was excited to get it, love the look and simplicity of it. It would easily fit in the formula box and is easy to change size of feeds. I was disappointed with mismatch of the powder amounts though. Amy Williams – Austin 9 Weeks

Very well packaged. Simple instructions on the back. The concept it great, save time rather than scooping multiple times in theory is great. The instructions were OK, they are a little large but that’s down to being in all different languages. The gap between the 2 parts isn’t great. With 3oz the scoop falls apart when using it. The supplied funnel needs some improvement. Once I grasped the concept yes. When trying with 3oz it fell apart when putting powder into the bottle I had a play with 8oz this seemed to overload the funnel. It does save time when scooping but time when filling the bottle and cleaning the Clevascoop after filling was very messy. This is good to use to save time, but waste wise no, the funnel needs improvement, and the scoop clogs up between the parts. To be honest after using it I wouldn’t waste my money, I would use the free scoop! I used this 3-4 times a day. For me personally this is not good value. I did like the face you only needed to scoop the formula once. I would not buy this.  The concept is great but after using it, it does not save time. This does measure out say 4oz easier however the funnel needs some improvement. The Product is well packaged. The concept is great. However with 3oz falling apart when putting powder into a bottle this isn’t great, (6oz too). Then at 8oz the Funnel fails to work and creates a mess I was not impressed. The gap between the 2 parts clogged up with milk powder. This then meant cleaning, compare to a single scoop which is far easier to clean! Lindsey Roberts – Evelyn, Henry & Mackenzie – 4 Years, 7 Weeks and 14 years

I think the scoop handle could be just slightly larger/longer to make it easier to grip/lift out from the bottom of the tub but overall a really interesting product; I pleased I had the opportunity to try it out or I would never have believed how much easier it could make it.