Saved In Toys 5 Year Plus and Special Needs Toys 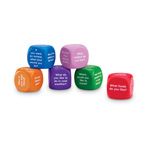 Get your child talking by rolling these appealing cubes!
Ages 6-10
Item No.: LER 7300
Spark discussions that will get all of your students talking. Colourful 4cm soft foam cubes feature 36 engaging questions about students experiences and perspectives, including "Who is the bravest person you know?" and "What foods do you like?" Use in character development activities, brainstorming before writing, and to build oral language, social and listening skills. Activity Guide included.

First impressions were that they looked interesting and we had never tried anything like this so we were looking forward to using them. Packaging was nice and cubes inside were very colourful. They are made of soft foam and are the perfect size for my daughter to use. The entertainment value was good. It encourages conversation amongst us as a family. I had no concerns at all about my daughter using these cubes. My son also played with them and he is 5. The playable context was good. The questions were easy to answer and fun at the same time. These are great for character development or social skills. These cubes are so easy to play with. They were stackable too which is another way my daughter played with these. When my daughter was playing with these with her brother, they chose to answer the questions for each other. They also stacked them and when the tower fell over they would answer the questions that were facing upwards. The quality is great. The price is ok for this product. It’s not something I would have brought before, but now that I have tested these I would consider buying them. I have recommended these to family and friends. They are great educational cubes that get you talking as a family and can be fun at the same time. Kerry Baldwin – Courtney 7 Years

Simple but effective at starting off discussions. Packaging was adequate and easy to open, nice to be able to see the cubes before opening. Nice size for holding and rolling, attractive bright colours to look at and easy to read. Lovely and squidgy too! It was entertaining and gave plenty to talk about. No concerns, I feel it is aged very appropriately. I thought it was a fun game to play, talking about birthdays and sports for example gave kids a lot to talk about and enjoy talking about! Not sure about how it would help with development as my child doesn’t have any developmental needs, but I would say it built up self-esteem and confidence in talking about topics. It did hold his interest and as there are several question s per cube, there was plenty to talk about. Has not really found any other way to play with this toy apart from squeezing them. Resilient and hard wearing, I think the quality is very good. Very good value for money. I would consider purchasing this toy and have already recommended. This is a great product. I enjoyed testing this game, it was something different that I hadn’t seen before and had a lot of advantages. Well-thought out and fun. Gillian Nolan – Keelan 7 years
Product Tested By Judy Beeston – Jasmin 7 Years

Good product. Packaging suitable for toy and easy to open. Size was perfect and the writing was ingood bold lettering and easy to roll. It is good for the first few plays but Jasmin did find it got boring after a few plays as she ran out of answers. Think it is good to use once a week maybe. I think the age range could be lowered to maybe 4+ as I felt Jasmin was a little too old for it. I think for a 7 year old it needs to be more imaginative as the games were easy and did not really test her or get her to really use her imagination. We did not use the cubes in a group environment as suggested on the instructions; maybe if they were used in a class environment then 7 year olds would have more fun with them. As she is 7 she has all her skills but it did help me to find out some things about which she has not told me before which was good. It’s too simple for my child. The quality of this toy is good. It is well made and will last well so yes I think it is value for money. I would buy it but for my younger child, I would not buy it for my 7 year old. Good experience and its nice to try new things to engage a Childs brain. Judy Beeston – Jasmin 7 Years

They are great educational cubes that get you talking as a family and can be fun at the same time.