Saved In In The Nursery 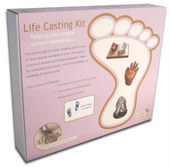 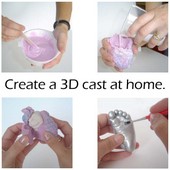 This kit includes all the materials to complete up to 8 complete casts of a baby up to 1 year old, 3/4 older child cast or 1/2 adult hand casts. Included are instructions, casting accessories, bronze, silver & gold paint as well as a paintbrush! Plinth additional £5.50.

When this arrived was very interested in the idea of producing a cast of Theo’s feet.  Liked the packaging generally.  Keen to begin making casts but concerned about how fiddly it might be.  Nize size box and I liked the introduction from Jo and Julie on the back.  I did not think the cast examples on the front looked especially attractive but the framed examples on the back looked much nicer (in my opinion).  The pictures on the side of a cast in progress were a nice touch!  Instructions generally very good.  The casting powder set quite quickly ruining two of the casts I had produced as I had only just half filled them – this was a little frustrating as from the instructions I assumed I had the best part of an hour and therefore did not hurry.  I would also have found it more simple if the casting and impression powders had been labelled with a 1 & 2 to make it extra clear which was which as I kept getting them mixed up.  The mixture was very easy to mix.  Also really easy to take the cast.  My baby seemed to enjoy the squidgy sensation on his toes.  He did manage to grab some of the mixture which got a bit messy but it cleaned off easily with baby wipes.  The minty smell of the impression powder was really nice too – although I would imagine that trying to stop older children eating it could be a problem.  The impression powder had a very quick drying time – but I had time to reposition his toes after he poked them through to the plastic bag.  The casting solution took a lot longer to dry completely – but started to thicken up much more quickly than I expected.  I certainly intend to do more casts at 6-9 months and then again around a year.  I intend to keep two casts of his feet in a box frame on our wall.  The other casts in a little keepsake box to look back on in later years or give to the grandparents.  I would purchase this as a gift as great idea.  However our family live quite far away and the wieght would put me off the idea of posting it.  I think the quality of this product is what you make of it.  For a not particularly creative person I’m happy with the results I achieved.  I feel that any faults in the finished casting were a result of my artistic incompetence rather than a reflection of the quality of the the materials.  Certainly good value for money as you could easily make eight casts of baby’s feet.  Personally I felt it would be useful to have two paint brushes included.  You are told to use one to push the casting solution into the mould, and would be great to have one to paint with.  Would also be useful if a tbsp measure scoop was inlcuded.  I will certainly consider buying this product in the future to make casts of future children’s feet or as a gift.  The idea of taking a casting is Fantastic – what a lovely way to really see just how small those little hands and feet really were.   A perfect way to remember those first precious months with a new baby.  Great product, nice idea and well presented.  Emma Grant – Baby Theo 3.5 Months

Well packaged, clear examples of product displayed on packaging.  Good strong box, nice and simple design.  Instructions rather daunting at first as 2 full sides of A4 in quite small text.  Read instructions through first as recommended and they were very clear.  Did have to read each section through a couple of times before each stage to make sure I knew exactly what I was doing.  I did consider buying a very similar kit when Lucie was younger but never got round to it.  I think they make an interesting keepsake as they give an extra dimension to a flat print.  The mixture was very easy to mix and they supply you with wooden lollysticks to stir.  Casting the feet was relatively simple.  Lucie sat in her highchair with a snack to keep her occupied.  She did kick a bit but was happy for me to get on with it.  Hands were another matter, much harder as she kept opening and closing her fist so mould was damaged in places and had small holes in the side where plaster would seep through.  Just depends on the individual child and their mood as to how successful you will be.  Instructions suggest you have 2 people, one to take impression and other to occupy child.  The kit does contain enough mixture to allow for errors so you do get more than 1 chance to get it right.  Mould took just over 2 minutes to set firm and slipped off easily.  I did moisturise Lucie’s foot beforehand as recommended and this helped.  You are advised to leave cast to dry for 1 hour.  I took our cast out of mould after 3 hours.  It was completely solid and came out easily.  Then left to dry for a week as advised before painting.  Personally I would only do a cast once in a childs life but making a series of casts over time maybe a month, year would make a nice comparision.  I would buy the kit again to make casts for any other children I have in the future.  We will display the cast in a box frame in Lucie’s bedroom.  Also this makes an ideal gift.  I was veryplesed and surprised by how much detail the finished cast showed.  You can see every little wrinkle and tiny toenail to perfection.  So cute.  Certainly good value for money as you have enough to make many attempts and one perfect cast is worth the money. Would suggest supplying containers to mix the casting mixture with the kit.  On opening the box and seeing instructins the process looked tricky.  Once I started it was all relatively simple.  I am very pleased with the finished casts which do look incredibly cute once painted and displayed and will make a lovely keepsake.  Stephanie Miller – Baby Lucie 10 Months

The Creative Castings are a beautiful gift. It has very modern and stylish packaging and the instructions are very easy to follow. However, the writing was very small so it took a while to read it through.  The product gives you lasting memories of your children when they are small with a very easy to mix mixture.  I’ve got a very wriggly 8 month old but we got there in the end. Also, the drying time did not take long at all, I left it drying for about 2 hours and when I checked it, it was solid to touch. I will do this every few months so that I can remember their development. I am keeping the casts in their room and giving them out as presents to grandparents I have thought of doing one of these for years but never got round to it. I would purchase this product again when my youngest gets bigger and for future children. Also as a present for a friend or family member as it is a lovely product which has left memories to keep forever. Overall it is a lovely product to keep and reminds you how small and perfect your children are. Becky Evans – Ella and Harvey Aged 5 Years and 8 Months.

A perfect way to remember those first precious months with a new baby.  Great product, nice idea and well presented.