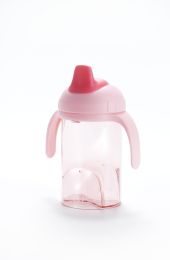 The Non spill drinking cup has a valve with two flow settings, slow for thin drinks and fast for thicker drinks. The skittle shape is easy for children to hold and  the spout close to the edge means that they do not have to tip their head right back to have a drink. They can drink easier and get the last drop without unnecessary effort, and they swallow less air.

On arrival I thought that the cup looked quirky and sturdy. The packaging contained a lot of information that was very useful on how to use the cup. The cup is very good quality and I think it will last better than some others I have used. I thought the angle was very good – made it much easier for my baby to use on her own and it fast became one her of favored drinking vessels. The cup was nice and easy to disassemble for washing and easy to put back together. The good angle of the spout makes it easier for her to use unassisted.  It is quite pricey but very good quality and worth the money. Overall it’s a nice looking and shaped beaker for babies to use without assistance. Angie Cowes – Baby Abigail 9 Months

On first impression, the cup is nice looking and seems to be very well made and sturdy. I thought the packaging was simple yet informative. It gave the details of the cup, which included the fast/slow flow valve, and what age it was suitable from, which is 9 months. I don’t think it would be eye catching enough for me to choose it over a cheaper alternative though if I was looking at it in a shop. There was a great deal of helpful information included in a booklet inside the packaging, which explained how the cup works, how to clean and sterilize it, and how to use the fast/slow valve. The cup is made of a good quality, strong plastic, with a soft rubber drinking spout. It looks and feels sturdy and doesn’t leak at all. The non-spill feature is fantastic and does mean that the cup doesn’t leak at all, but it isn’t very hygienic to carry a cup with no lid. The drinking spout is soft but not too soft, which means it does retain some rigidity and is yet easy for baby to drink from. It doesn’t leak at all when turned upside down even for extended periods of time, which is excellent. Another thing I liked about it was that despite my son having teeth and chewing on the spout, he was managing to leave minimal tooth marks in it, which can only help to keep the cup clean and make it last longer. The spout is well positioned close to the edge of the cup, so baby can drink more of the contents, I have found with other cups that baby can normally only drink about half the contents but with the Difrax cup he can get about 3/4 or more of the contents. The cup doesn’t stack, the easiest way I found to store it was to just put it together to save having lots of parts stacked on the shelf. Unfortunately I didn’t feel that it stored well as the cup doesn’t have a lid, so I had to wash it immediately prior to each use.  The cup is easy to assemble and disassemble, and it is easy to switch the valve around from thin to thick liquids. The cup is easy to clean as all the parts come apart, which make it easy to get in the nooks and crannies. The cup has a unique non-spill valve which actually does work, which is a rarity with cups as I have found so far. You can also choose with the valve whether you want to be feeding thin liquids like water or juice, or thick liquids like milk. I found that my son struggled to drink even water while the valve was on thin liquids, but I think this is probably due to his age. When I swapped the valve around to thick liquids he drank water from the cup fine with no problems, but the cup wasn’t as non-spill when the valve was set to thin. This is a very good cup and does seem like it would last well, but I don’t think I would have spent that amount of money on it personally when there are cheaper cups on the market.  I liked the non-spill feature of the cup, as it is rare to find a non-spill cup which is actually non-spill, most do seem to leak a little but this one does not. The valve however is quite stiff though which means it needs a strong suck to get a drink out of the cup. However I felt that the hygiene of the cup was compromised because of the lack of a lid, I felt that I couldn’t really take it out of the house. The handles of the cup also can be moved around the cup as they are not fixed, this seemed to trouble my young son as he would put the spout to his mouth and then the cup would swivel out of the way, but this probably wouldn’t be an issue for an older child with slightly better co-ordination.  I would recommend the cup to others, especially those with slightly older babies, as it is a great durable product that does what it claims to, it really is non spill! Emma Withers – Seth 10 Months

I thought the product looked different and had an interesting design. I was very impressed with the packaging because it looked different and informative. Was a little bit too long for my baby at first -she was 9 months when we started using it, it didn’t have a lid but we thought that the angle was very good which made it much easier for my baby to use on her own but we also found that water leaked through the air vent. I found the cup to be quite large and bulky but it was very easy to assemble and disassemble. It was also very easy to clean although the spout got stained an orange colour due to using it at the same time as eating jar food. The spout is of a good angle and I think it is reasonable value for money. The only problem that I had with the product was the leaking from air vent and after a couple of weeks from the edge of the lid (it had been thrown on the floor several times so this should be expected – but other cups we’ve tried have withstood this for several months) but I would recommend because I think it is a good design and the other products available also look good. Rebecca Howell – Alexandra 11 Months

Overall it’s a nice looking and shaped beaker for babies to use without assistance.