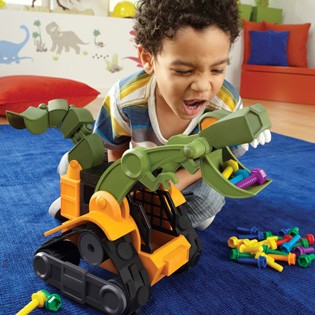 The
toy it’s self was well packaged in a study open fronted design which meant it
could be seen and touched before being played with. No real assembly required. The toy was
perfect for my son’s age group.
My son loves it and he played with it in an imaginative way straight way. It is
great, it can be a digger it can be a dinosaur and it can be both and it is
great for clearing up Lego at bed time. This
certainly keeps my son entertained and it is now one of my son’s favourite
toys. IT is excellent quality and I have
no worries about it being broken when being played with. Although I love it I’m not sure I would pay
£41 for it I may wait until the sales. I
would highly recommend. Great quality
toy and can be used in the home and in the garden. Jackie Wells – Joshua 4
Years

Great
that it was ready from the box, this caused great excitement for my child. The product looked and felt sturdy and solid;
overall, very pleased. Packaging very
bright and eye catching. No assembly needed
just a few easy to remove tags in packaging.Very good
toy for a 3-6 year old. My 5 year old absolutely loved it. No concerns a nice
solid and chunky toy with no small choking hazards. Not a great deal of imagination needed to
play with this toy. However it is a
brilliant sand or mud toy. My son loved
this and certainly kept his attention. The
quality is fantastic. This toy
is solid, chunky and durable. A little
pricey but it is good quality. Now that we have tested this I would most
definitely purchase. Would highly
recommend. A very good toy which
has kept my son happy for many an hour. Shelly Lowe – Charlie 5 Years

It
looks well-made and fun. Feels very
solid. However it was quite dirty and
needed to be cleaned before I could give it to my child; it appeared it had
been stored somewhere quite dusty. The packaging was bright and eye-catching. It stated what the different parts of the toy
were, i.e. tail for smashing rocks. There
was no assembly required; the toy simply needed to be removed from the
packaging and this was very easy. The
toy appeared well put together with no sharp edges and I was happy for my 3
year old to play with it. It was so
solid that I also allowed my 11 month old to play with it under supervision. The
toy itself doesn’t do a great deal, but my son enjoyed pretending it was a
dinosaur rather than a digger. He had
lots of fun having it eat his Happy Land people and rocks. Initially it did keep his attention, in fact
he insisted on taking it to bed with him for the first couple of nights. However he appeared to lose interest in it
within a week and needed to be encouraged to play with it. It appears very well made and I can’t see it
being easily broken. The majority of it
is made from strong plastic and there seem to be only 2 metal screws at the
bottom, so we’re planning on taking it to the beach which I think it will be
able to cope with. Despite being well made, this toy doesn’t actually do very
much and so I’d say it was over-priced. While it was initially well-received by
my 3 year old, has lost interest in it very quickly. Depending on the child and what they like,
this could be a great toy. It is very
well made and eye-catching. I would
recommend they look out for it being discounted though. It is strong and well-made but unfortunately
didn’t appeal to, my son who very much likes noisy toys. Kate Pearse – Joe 3 years

Great quality toy and can be used in the home and in the garden.