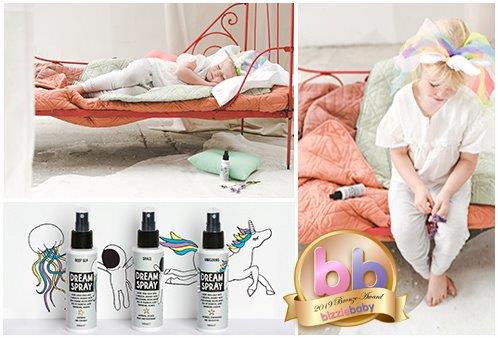 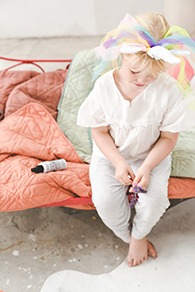 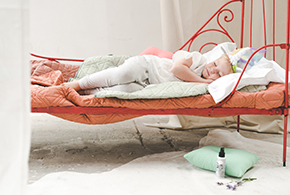 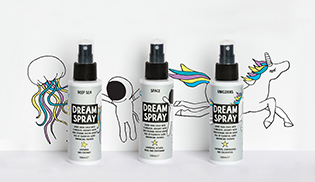 UnicornsDream Spray 100ml.
Fly your unicorn through the magical skies and feel your stresses disappear with our Unicorns Dream Spray, a pillow spray for children with Lavender, Lemongrass and Eucalyptus essential oils. Fight imaginary fears and anxieties and focus on positive and calming thoughts with this magical pillow spray.
Parabens and sulphate free, no fillers, no petrochemicals, cruelty free, quality natural ingredients.

Simple spray bottle. Not eye catching to me. Smells nice, reminds me of refreshers sweets. Very dubious as to whether this product would help me in any way but nice idea of encouraging calming thoughts whilst drifting off to sleep. I personally prefer brighter packaging however the picture would still capture the attention of a child. Press down spray nozzle, easy to do for me however my daughter struggled. Not products fault. This was very effective. When this first arrived, I was very dubious as to whether this would help at all as normally it would take my child 45 mins to 1 hour to drop off however on the first night, she was asleep in 15 mins. Although I didn’t focus on the spray being a calming spray but more so for sleep, I reckon it did help in the sense that it encouraged her to settle herself. I quite liked the aroma, reminded me of refreshers sweets. My child when asked about whether she liked it said “yeah, coz I love it”. I think it’s better to be all natural as you know what is in a product whereas when there are added chemicals, you never truly know what you’re using. I have used this product every night so far. Only used this for my daughter. Smells nice, bottle a decent size, good quality spray bottle used, not flimsy plastic. I didn’t think it would be but after using it, time falling asleep reduced rapidly from 45 mins- 1 hour to between 5 and 15 minutes so yes, I would say it offers value for money. I loved the scent, but the fact that product did as it said is great.I would buy the product. It’s helped so much with sleep that I’m considering buying another before this one runs out. I already have recommended it to others. It’s worked so well for me so have let others know of this product after they told me of their child’s trouble going to sleep.I have loved using this product. The fact that it does as it says in regards to sleep has been a godsend. This product has definitely been a great addition to our sleep routine. Another one will be purchased shortly as it has helped me so much settling my daughter to sleep that I don’t want it to end and with the drop in time it now takes, why would I want that to stop. Kelsey Frost – Bella 4 Years

The packaging on the spray was very pretty. The unicorns are very attractive and made my little girl excited to use it.The concept is a really lovely concept. My little girl has started to get the occasional nightmare and the idea that the spray would help keep the nightmares away is very appealing.The design of the bottle was lovely; however the plastic cap isn’t the best in my opinion. This was extremely easy to spray on my child’s pillow.I am unsure whether or not this helped her sleep as her sleep patterns hasn’t really altered but she was a good sleeper once she was asleep. I do agree this is a good calming spray. The idea of the spray is that you tell your child that it is there to help give them positive and calm thoughts. My little girl did like the smell, however she thought that it was citrusier than she liked. Being made of natural ingredients is important to me as I like products that haven’t been tested on animals and don’t have any chemicals in them.We would use this every other night.I only used this for my daughter. I thought the product was good quality; however the smell was too citrusy for my liking.It has quite a high price tag for what it is. I liked the concept behind the product and the pretty design.I really do not think it made a huge difference to my little girls sleep so not something I would purchase. I would recommend if I had family friends who were struggling to sleep. The concept is fantastic and the product is well packaged. I would like it not to have a plastic cap and be slightly less citrusy. Overall this is a lovely product which has a beautiful concept to help children sleep. I do wish it was less citrusy but it generally smells pretty. The bottle is a lovely design and it makes it very attractive. Jessica Howard – Charlotte 3 Years

It looked exciting and came with a postcard for the child to colour in. I liked that there was limited additional packaging. I thought it was a clever way to introduce a natural sleep aid to children. Easy to use – my daughter is just about able to spray it on her pillow herself. Bright and colourful but also no major fuss. Simple pump action Easy to use – my daughter is just about able to spray it on her pillow herself. My daughter is generally a good sleeper so I can’t comment fully here but she certainly liked the smell on the pillow and liked to snuggle into it – although I’d advise to spray before a bath or before story time so that it has time to sink into the pillow as my daughter didn’t like the smell being too ’bright’ or if the pillow was a bit damp. After the initial excitement of dreaming of unicorns on the first introduction yes I think it did act as a calming spray – as she would say – I’d like to dream about unicorns tonight mummy. My daughter liked it but not when it was initially sprayed as it was too ‘bright’ / heightened. I do think this smell is an acquired taste though. I love it but my husband hates it and when I spray a similar formula on my own pillow, he complains that I’m stinking out our bed! Definitely important to me made of natural ingredients with no chemicals and cruelty free.I would use this every other night. We didn’t use it with other family members, but I might try it now! I thought it looked and smelled nice. I personally wouldn’t pay £12 for this, particularly if it was a first try to see if it possibly would help with sleep. Perhaps a trial bottle may be a good idea? For the size we had, perhaps £6-8 would be a nice price point. I liked that it was colourful and fun. Hit’s the unicorn angle really well. Clever marketing. Smelled nice. I would not purchase this only due to fact my child does not have real issues with sleep and also due to price point. I would recommend if a child was having difficulty sleeping yes then I’d say give it a bash but I might recommend them to get a trial size (if available) first to see if it works for them. Also it’s a strong smell which might not be liked by all. The concept is clever and the product looks fun and is easy to use and plus points for the minimal packaging! The price point worries me a little as I think this will put people off giving it a try. Kelda McMichael – Romy 3 Nearly 4 Years

The fact that it does as it says in regards to sleep has been a godsend. This product has definitely been a great addition to our sleep routine. Another one will be purchased shortly as it has helped me so much settling my daughter to sleep that I don’t want it to end and with the drop in time it now takes, why would I want that to stop.