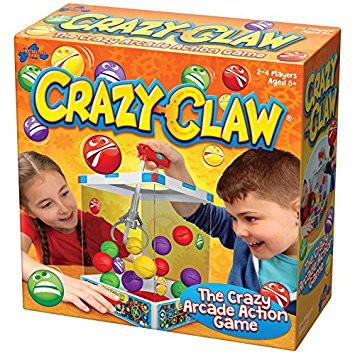 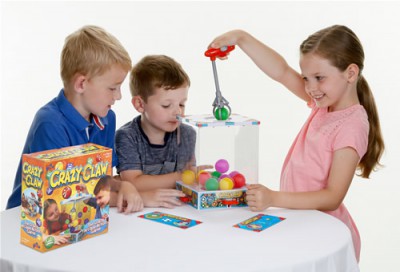 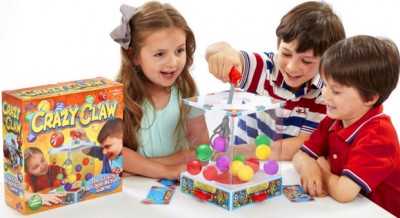 The claw, the grabber, the crane… it’s that perennial amusement arcade attraction on your own kitchen table! Take turns to be the CLAWMASTER, and make a grab for the ball you need. But keep a steady hand – the other players will be frantically bashing away on the paddles to put you off your grasp! (This is one game where it’s just as much fun when it’s not even your turn…) There are toy tokens hidden inside those balls; match the three on your card and you’ve nailed it! Crowning clawmaster… prize pincer… greatest grabber! Claw-tastic fun for kids of five years and above, Crazy Claw pitches concentration and persistence against out-and-out mayhem – a playroom-friendly twist on an old arcade favourite.

My initial
impression feels good quality and it is a great idea as all kids like arcades. The box feels sturdy, good quality card and
brightly decorated. The instructions
were easy to understand even my 6 year old could understand the game
rules. My 6 & 7 year olds understood
the concept straight away. In a playable
context this game kept my children amused for over an hour. This game is very good for hand-eye
co-ordination. It also helps them learn
to take turns. I also feel it helps with
social skills as my child had a friend over who was shy, but once they set up
the game they were all laughing and having fun and the shyness was
forgotten. This game kept them
entertained. The game looked really good
quality, only downside is the main cube looked a little flimsy. I do think this
is good value for money. I would
consider buying this game and I would recommend. Delivered hours of entertainment and great for
social and hand-eye co-ordinations skills.Katie Cottrell – Ellie 6 Years

A different
kind of game. More hands on. Nice bright packaging with good photos so you can
see what you are getting. Box is sufficient size to hold game dismantled
without having to cram it in. However it
is inconvenient to have to dismantle the game each time. My nine year old was
able to set it back up but my five year old couldn’t. Really easy to understand
and clear easy instructions. My children understood how to play the game after
the eldest read out the instructions (with me overseeing him as he has a habit
of making up rule to suit him). Once explained they were straight into playing
the game. It was quite basic and
had limited scope to hold their attention once played a few times. It is good
to play with different age ranges as everyone has a pretty equal chance of
winning. Good to develop hand to eye coordination and encourage turn taking. As
they were able to be involved with game play whilst sibling had their turn they
were less bored than in other games. Very simple and easy to play without
losing interest. Game doesn’t last long. 10/15 mins max. My children will
probably develop more ways to play it as my son likes to make up his own rules-
it really depends on whether his sister tolerates it though! The quality of the
game is good. It seems sturdy although I do have concerns about whether the
plastic/Perspex that holds the balls will be robust enough over time. Annoying
that I needed to put the stickers on as with excited children they just want to
play! I expect to pay £10- 15 for this max therefore felt the RRP was high. I
liked that the game is fun and gives both children pretty equal chances of
winning. I disliked having to put all
the stickers on the game – I really would expect that to be printed on or done
already especially considering the RRP. If the price was less I would
purchase. Would recommend as good
game. A good fun interactive game to
play with a range of ages. Tania Watkins
– Aiden & Cerys – 9 & 5 years

Instructions
easy to follow. Very easy to set up too.
The concept is fun trying to grab your ball and have the right token to match
to your card so you can be a winner. Can
become quite competitive. Both my boys
understood the concept and found this easy enough to play. It did keep their attention as they are both
very competitive so always want to win.
Was also a good family game to play together. I would not say it stimulated imagination but
was fun and enjoyed by my boys. It does
help with hand eye co-ordination. The
game is good but I was surprised at the price.
Expected it to be lower. It is a
game of chance so anyone can win. We all
had fun playing this. Not sure it would
be one I would purchase but would recommend as everyone can join in. Good quality game fun for all. Eve Philpot – James & Charles – 7 & 5
Years

I would consider buying this game and I would recommend. Delivered hours of entertainment and great for social and hand-eye co-ordinations skills.