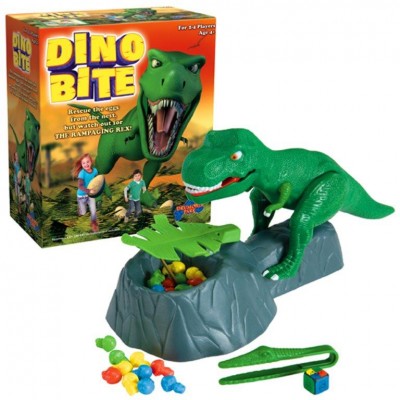 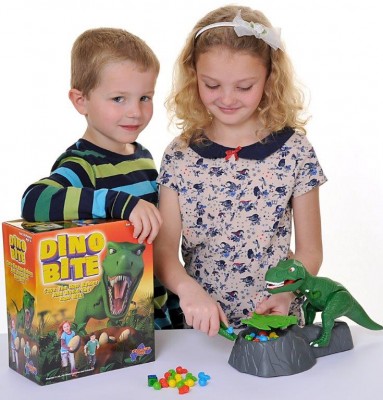 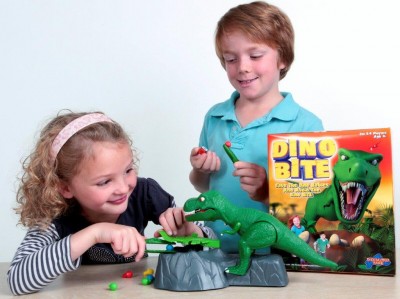 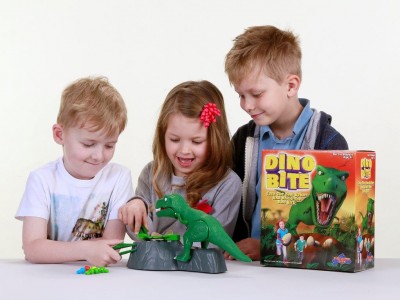 The Dino Babies are in danger from the rampaging T-Rex. Can you save them all before the DINO BITES?With realistic jungle noises and the shock of the lunging dinosaur, this is a game of spine-tingling excitement and fun for all adventurers.Each turn, players must save a Dino baby by lifting the giant leaf and sneaking out a Baby using the tweezers provided.But beware! If the T-Rex knows you’re there, it roars out loud and lunges forward to scare you away from its next meal!

The picture of the dinosaur is ‘scary’! The explanation for
how to play the game is short and concise. The picture of the boy and girl
shows this is a universal product suitable for both genders. I like the
packaging it is bright and colourful very enticing! I like the boy and girl
picture she is running with the egg although; an ethnic minority child could
also be included to appeal to all. The concept is very easy to understand for
adults; short and concise paragraphs on the front and the back of the box. I
believe there is no further explanation needed. We have not seen this game
advertised anywhere before. Urouge understood the concept of the game and
played in accordance however, Amelia needed assistance. The maximum number of
times we played was 7 after my little one lost interest. On their own they
played only 4 times after losing interest; my 4 year old loved rolling the dice
and picking/taking the egg. My children are used to taking turns however, they
did concentrate which helped with their hand/eye co-ordination as well as counting.
The dinosaur and the base where the eggs are placed seem sub-standard for
£19.99. The dice is colourful as well as the eggs; my little ones loved them.
Both children were scared of the dinosaur noises at first but, they got used to
it quickly. I believe it should be slightly cheaper around £15 so everyone can
buy it! This is a family game and we all got involved yet, there are no
pictures to reflect this in front or at the back of the packaging. Furthermore,
the product does not state anywhere that it can be enjoyed by family. I also
played this game with other family members and a 4 year old and 7 year old
therefore, I feel that this is better suited to 6 or 7 year olds not 4+. Also,
the national curriculum teaches life of dinosaurs at this age range the product
could reflect that and place an educational spin to appeal to a wider audience.
I would consider buying this game and recommending to others. It is enjoyable,
educational and engaging! Kauser Akram – Urouge 4 ½ Years and Amelia 2 ½ Years

This looked like a suitable game that was age appropriate
for my son to play. The packaging was colourful and appealing to play and also
described very clearly what the game was. The concept is very easy to
understand; it was easy to set up and straightforward to play. I have not seen
this advertised on TV but have seen this for sale in Asda. My son understood
exactly how to play this game. I would describe this as a dinosaur version of
operation. I had no concerns about him playing with this game. I would definitely
recommend this game to boys who like dinosaurs between the ages of 4-7 year old.
This game is brilliant; the sound effects are great and very realistic. This
helps with hand eye co-ordination as you need to have a very steady hand. It is
enjoyable and simple to play too. It is really good quality; colourful with
great sounds. I would say maybe retail price of £14.99 would be more suitable
for this though. I would still purchase this item; it is a perfect game for any
dinosaur lovers out there. I already have recommended it to a few of my friends
with sons of similar age to mine. This product definitely deserves a top marks
as it is a great and enjoyable game which will fright and excite you. It is an
enjoyable frightful and exciting dinosaur chomping game which will keep you on
your toes from start to finish. Sarah Louise Mason – Jake 5 Years

What an exciting game for children! The game packaging was
as standard, no complaints from me. The concept is very easy to understand for
grownups and easy enough for a child to understand too. We have never seen this
game advertised before so was new to us. I had no concerns with my son playing
with it; it is very child friendly. My child is very into Dinosaurs at the
moment so was the perfect game for him. He enjoyed playing it. This game helps
with their child development; taking turns, using tweezers, colours and counting.
It was simple enough for him to play with without losing interest. The quality
is as standard. I think it is expensive though for what it is. I don’t think I
would buy it at this price but would if it was on offer. I would recommend it
to others; I would say that it is a good game but fairly expensive for what it
is. It is an enjoyable short game for children. Tweezers are fun to use and my
son liked that the concept was dinosaurs. Johanna Dangerfield-Simons – Roman 4 Years

I would consider buying this game and recommending to others. It is enjoyable, educational and engaging!