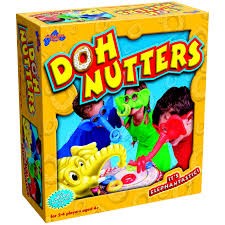 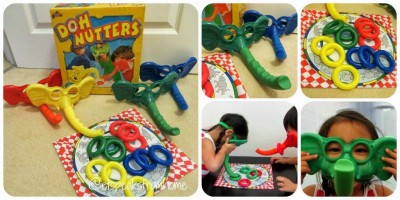 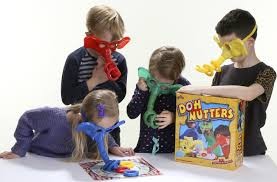 DOH NUTTERS is the immensely popular elephantastic kids’ action game. Play the part of crazy, doughnut-loving elephants in this hilarious fun, fast action game.Each player takes a mask and three doughnuts that are the same colour as their mask’s spectacles. They then scatter their doughnuts on the playing board and put on their masks. When everyone is ready, the youngest player shouts "start" – and using only their trunks, players must scoop up their coloured doughnuts as fast as possible – onto their trunks.The first doughnut is easy, the next harder – but with the final doughnut, tension reaches an all time high! The first player to get all of their doughnuts onto their trunks is the winner!DOH NUTTERS is brilliant fun for ALL KIDS: Big and Small! Perfect for every sort of gathering… Birthday Parties, Christmas Parties, House Warming Parties, Weekend Parties, Drinks Parties… In fact any time you have a group of silly, fun lovin’ people.

On opening the product the packaging was appealing to all
who were about to play and my son was keen to make a start. Easy set-up which
meant no frustrated son waiting! The packaging is bright and appealing to
children. The pictures used give the child an immediate idea of what the game
involves and my son was keen to get going. As an adult this is straight forward
and easy to understand. We have seen this product advertised on the TV only; we
have not seen it online or in a magazine. My child did understand the concept
of the game. Initially there were no concerns, my son aged 4 ½ did find this
very difficult to play even with the reduced number of donuts to collect. I
feel that it is more suited to an older child. He loved the idea and loved
having a go but it soon became apparent that it was near on impossible to get a
donut on for him let alone 2 as the idea of rocking the donut onto its side was
a difficult concept and skill to master and explain! Due to what has been
outlined above because he found the game so hard to control it did not hold his
attention for long (although Mum and Dad we kept entertained a little longer)
He became disengaged quickly which meant there was some cheating going on so
that Mum and Dad could finish the game! I don’t feel that there is a benefit in
supporting my son’s development; apart from possibly using it to count to 2 or
3. Oliver used the mask to pretend to be an elephant and he also used the
donuts in his play kitchen! The game appears to be of good quality and the
parts are well made. The masks were comfortable to wear and seem to be durable.
I think it is a lot of money to spend on a game but for a child who is older
the price would reflect good value. I really like the concept, it is different
and fun; it just wasn’t age suitable for our son. I would consider buying this
as a present for friends with children 6+. I would recommend it; this would be
a good Christmas/party game for older children and adults! A good concept and
has potential for lots of fun, the age suitability needs considering though. Joanne Spencer – Oliver 4 Years

The elephant masks and rings look well-made but the ‘board’
seemed quite flimsy. The box didn’t seem great for regular usage. The packaging
was a good size box but not strong enough to withstand regular opening, getting
things out and closing. Children can be excited and boisterous when trying to
get toys out and the box showed signs of damage straight away. The game itself
is very straightforward concept-wise. We have not seen this product before
anywhere. My children both understood the concept straight away. It all looks
safe and age appropriate, I had no concerns about them playing with it. They
love wearing the masks but the game itself was nigh on impossible, the board is
too small and slippery, there was no easy way for the children to pick up the
hoops using the trunk. The hoops constantly slid off the board and we resorted
to picking the hoops up off the grass so that they didn’t slide around. The
children soon ditched the game and have just enjoyed wearing the elephant masks
which cause much hilarity for children and adults alike and using the rings for
various other games such as for doll’s hula hoops and letting toy cars drive
through them. Unfortunately the quality of the game is not so good; the masks
are great, the rings are well made but the board is flimsy and completely
mismatched with the quality of the plastic items. It is a good idea but badly
designed. Karen Larne – Jasmine 4 Years and George 2 ¾ Years

The game was nicely packaging; looked of good quality. I
understood the game concept but thought it might be a bit difficult for
children to understand that they can’t touch it with their hands. We have not
seen this on TV but we have looked at this in store before. My children
understand the concept but found it to be frustrating. My children quickly lost
attention with this game as they were frustrated that the donuts were flat on
the table and they couldn’t pick them up easy. They were good at understanding
that they had to take it in turns. The quality was lacking; the noses came of
the masks quite easily so I had to put them back on. I don’t think it offers
value for money at all. I wouldn’t recommend it because I don’t think it is a
good quality game. None of my children liked this game or found it interesting
to play; they also found it quite difficult to use the masks. The kids played
with it for a couple of minutes before giving up; the noses kept falling off
the masks also no good if you wear glasses as they won’t go on over the top of
them. They also found it hard to pick the donuts up. Karen Lambert-Sykes –
Chloe 8 Years, Daniel 4 Years and Matthew 3 Years

I would consider buying this as a present for friends with children 6+. I would recommend it; this would be a good Christmas/party game for older children and adults! A good concept and has potential for lots of fun, the age suitability needs considering though.