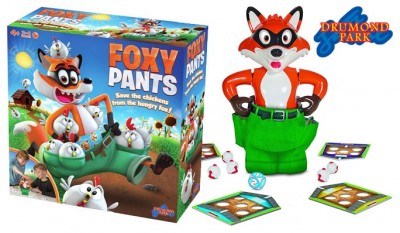 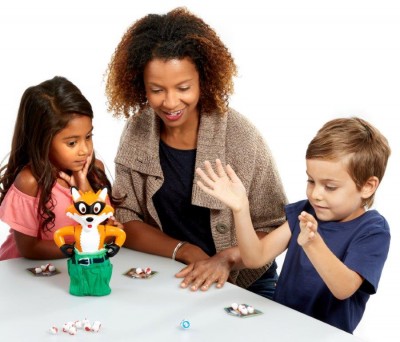 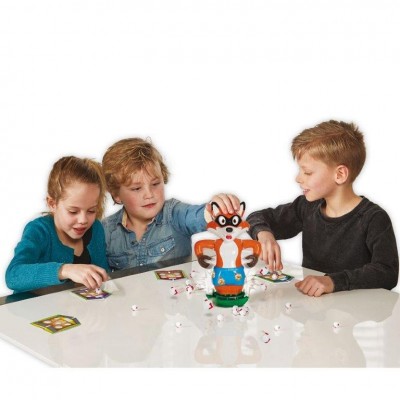 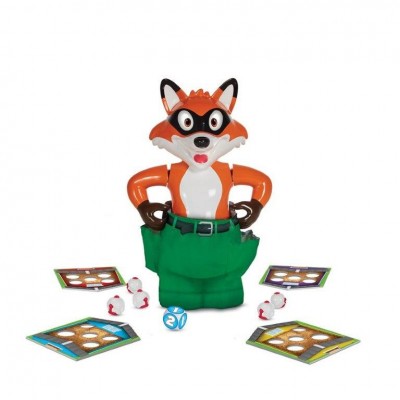 Foxy likes to think he’s cunning… It’s a shame his trousers keep falling down! Take turns to grab Foxy as he makes off with his swag. He’s a greedy so-and-so, stuffing his pockets so full that – oh! There they go again! Now it’s a mad dash to grab as many chickens as you can! Fill your coop whilst the poor fellow stands there in his pants – the first person to rescue five chickens is the winner!

Nicely packaged,easy to follow instructions. Understood the concept straight away. Nice bright box, good eye-catching images. Although we thought it would have been better if all the stickers were already on the fox rather than putting them on ourselves. Easy enough to follow instructions but child needs and adult to set up. My son found the ideal of the game very funny and entertaining. This is age appropriate. Once we explained the instructions to him. He couldn’t quite grasp the idea of only using one hand to collect one chicken at a time. Although he had lots of fun playing. Contents of the game good quality. My son found it easy enough to play but needed and adult to pull foxes pants back into position. He enjoyed playing with other friends his own age and was able to explain the rules to them.We all played the game as a family and enjoyed playing this game with our son. He really enjoys playing and always asks to play several times in a row. Good quality, well made, good idea behind the trousers folding up into the fox and yet the fox always remains standing. I do think the price is a bit expensive for the product. Probably around £15.99 would be what I would look to pay. I love the way the game works,I think the concept is very clever and well thought out. Nice quick, easy game for all the family to enjoy. I would purchase if I saw it on offer. I would recommend as a good game. We really enjoy playing this game; it’s quick and easy to play. All ages can get involved, easy to follow instructions, very well made and good concept. I love how the mechanism works to allow the fox to remain standing once his pants have gone. Great fun that my son gets a lot of entertainment from. Amy Thompson – Luke 5 Years

The packaging is colourful and appealing .it looked a fun game on the front and Chelsea wanted to open straight away the instructions are straight forward and easy to follow. We read the instructions out loud and Chelsea followed after a couple of goes she got the hang of it. This was definitely age appropriate for my girls.Chelsea loved the game contents .she really liked the fox and chickens and thought they looked cool in her words. Chelsea loved the game and thought it was easy to play. Chelsea took it to her 5 yr. old friend’s house and they liked playing together. we all played as a family with her 23 yr. old brother younger sister and older sister played .me and her dad had a game too it was fun it did initially keep her entertained but she did get a little bored after around an hour of playing she said she would have loved it if there had been sound from Mr fox or the chickens. The quality is brilliant . It looks like it will last a long time. I think it would be better being under £20 making it in line with other games on the market. Chelsea loved it when Mr Foxes trousers came down and disappeared she laughed so much. I would consider buying it was a fun game and Chelsea liked it .she had fun .she did get bored after an hour of playing but did go back and play again after. I would recommend to friends and family with similar aged children to mine .I think the kids would like it. we will give a mark of 4 it’s a good all round game .it’s well-made and the kids liked it .if it had sound it would get 5/5 every time. Chelsea loved being picked to play/review foxy pants .she had a really positive experience and was so excited to receive and open .she’s played with it most days since receiving and said she would have liked it for Christmas .she was able to set it up herself and followed the instructions fairly easily . The game is well made and in her words is a lot of fun. Jennifer Derry – Chelsea – 6 Years

The box was colourful and vibrant and the children enjoyed helping to set it up. Packaging colourful and relevant to the game. Instructions easy to read and follow. Oliver my eldest who 9 years old understood the concept of the game, but I had to explain to the younger children. My son has just turned 5, and my 3 year old daughter understood the game well too, the age range suits the game. Not too many fiddly bits; great for young children. All children found the game easy to play once I had explained what to do. They played nicely with the game together, I did not play but I watched. I found the children got bored quite quickly with the game. So far the product quality seems fine. I find the product quite pricey for what it is. I really liked the fact children of all ages can play this game. I personally would not buy this game due to it being quite expensive, and it doesn’t take many clicks for the fox’s trousers to come down. I would recommend as a good family game for smaller children. It is a good game, but I wouldn’t want to pay the price recommend as it can get quite boring quite quickly. Good for families with young children; Children can help set the game up, and put the stickers on the foxes underwear. A good amount of children can play the game; Alice Thompson – Oliver, Kai and Isla – 9, 5 and 3 Years

All ages can get involved, easy to follow instructions, very well made and good concept. I love how the mechanism works to allow the fox to remain standing once his pants have gone. Great fun that my son gets a lot of entertainment from. 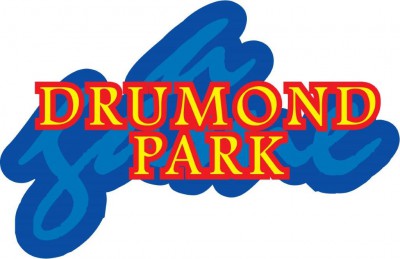