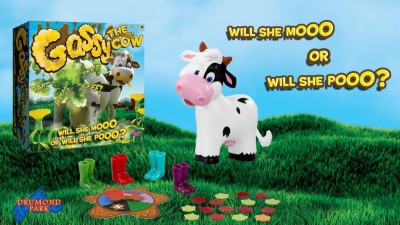 Spin the spinner – who HAS to walk their welly boots up to Gassy’s bottom? Lift Gassy’s tail to find out if she will MOOO or if she will POOO! If Gassy poos? Eww! Stand in the poo to clip it to the bottom of your boot. If it’s just wind? Phew! You’re safe! The player with the cleanest boots wins. Watch out for the MEGA POO – it’s gross!

Obviosuly a
lot of thought has gone into the design of the box. The girls instantly
recognised it from the TV AD and shrilled with excitement. The concept of the
game is simple and fun. Instructions were clearly written and easy to follow. As
the game is relatively simple, the children had no trouble understanding the
concept of the game. We do not normally buy games like this for our children.
They really enjoyed the concept because it was something new. The game is
relatively entertaining but its not one you could play for hours. The children
liked this game because of its crude nature. Who wouldn’t laugh at the sound of
a gassy cow?! From a quality prospective, it is very well designed and made. At
the rrp I would not consider the game to be good value for money, At around £17
or £18 I would feel that it was offering me real value for money. Seeing the
girls reaction when they realised they had ‘Gassy the Cow’ game after watching
it for weeks on the TV Ads, yes I would buy it just for that response alone.
Rarely are my girls that pleased with presents or gifts. I would recommend this
product to anyone. It has that unique ageless appeal and the game concept is simple
enough for anyone to understand and play quickly. No faffing about with
complicated instructions and rules. The simplicity of the game is hit, and
could be played by children as young as 3 year right up to great, great
grandparents. There is nothing overcomplicated or tricky to master. A
delightfully simple and funny game for all ages. Louise Marks – Millie &
Chloe – 7 & 5 Years

It looked
fun, although we were all expected a board to play on. I couldn’t really see
the point of the game, or why this would be fun to be honest. Instructions were
clear and easy to understand. My son
easily understood the concept of the game.
He actually Loved it. He wanted to play it on his own when we couldn’t
play with him, and it’s the first thing he wants to play when friends visit. He
loved the pooh and wee shooting out of the cow’s bottom. It hasn’t gotten old
to him at all! Quality is good but I feel the cow tail seems like it could
break if pulled too hard. James has had hours of fun with this game, and as a
family we’ve laughed so much playing it! I am looking to purchase this for my
nephews. I would recommend. Although the
premise of game seemed gross and silly, it’s everything a boy loves! We’ve
enjoyed playing it as a family, and despite my initial reservations, I’ve
actually really enjoyed playing it! Michelle Lingwood – James 7 years

I thought the
box design looked great and we were all really excited to play the game. It looked fun and the cow was very cute and
likeable. The idea behind the game is good.
A fun game for all the family, which child doesn’t like to giggle at the
mention of poo. The instructions seemed clear enough but the game really didn’t
flow when we played it according to the instructions and at the suggestions of
my 11 year old we tweaked it to make the game work better for us. When followed my 4 year old became bored very
quickly by playing by the instructions given. My child did understand the
concept of the game. The only thing that
felt didn’t work so well was the golden poo. Once we adapted it slightly my
daughter really enjoyed the game. She
loved the cow and walking the welly boots about on her fingers. Unfortunately
she was bored very quickly by this game and although she did enjoy when I
suggested we play it despite it being in our kitchen along with the other games
she wasn’t that keen to play it often choosing others instead. She loved Gassy
as she says she looks happy and she thinks it is very funny when she poos. Without realising it I would also say she
loves the boots. She will sit
entertained walking the boots around on her fingers even not during game play. Good
quality product which I think would stand the test of time however refilling
the poos and pees is a bit of a fiddle. I would have been disappointed if I had
paid £24.99 simply as I do not think my daughter would choose to play with it
and that it would very quickly end up in the back of a cupboard despite us
playing lots of games as a family. We were really looking forward to trying out
this game. My daughter had seen adverts
on the TV for it and I had told her it would be arriving in the post so she was
very excited about it. When it arrived
we jumped straight in and got it set up.
Gassy is a very cute likeable character and the idea behind the game
sounded fun for all the family.
Initially it was myself and my daughters 11 and 4 playing. We read through the instructions and started
to play. Very quickly my 4 year old lost
interest and my elder daughter and I thought we must be playing it wrong so
both read through the instructions again to see if we had misread but no. We decided to tweak it so that you got a turn
every time to keep my youngest interested and that the spinner was for how many
turns you took. This worked well. When
my partner came home I got him to read through the instructions and play with
our 4 year old how it said and he too felt that it made it slow and she lost
interest. From there on in we played the
game our way otherwise I don’t think I would have got my daughter to play at
all. It is good fun and liked the idea of the poo and pee turns however the
golden poo didn’t add anything to the game play and don’t feel that it was
needed. I really wanted to love this game but overall was a little
disappointed. I think it will surface
once in a while but definitely won’t be a family favourite which is a shame. Jane
Philip – Aila & Isabel – 4 & 11 Years

The simplicity of the game is hit, and could be played by children as young as 3 year right up to great, great grandparents. There is nothing overcomplicated or tricky to master. A delightfully simple and funny game for all ages.