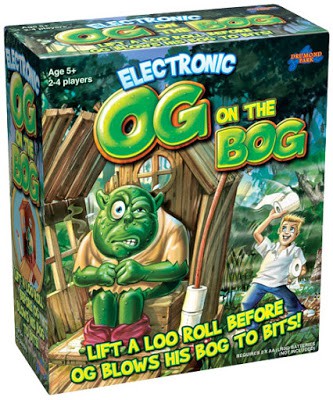 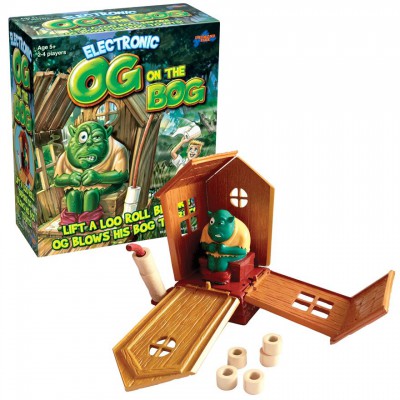 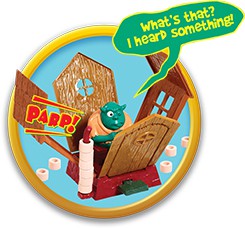 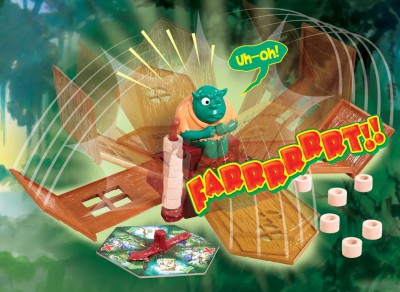 You’re trying to steal Og’s loo rolls while he farts and fumes in his bog. Just hope he doesn’t blow his bog to bits with a gigantic fart while you’re too close for comfort!You are a group of adventurous children who want to steal Og’s loo rolls and leave him in a pickle. As you lurk around the bog, take a spin to see if you can sneak a loo roll off its pole. If your hand isn’t steady enough, Og might hear you and scare you away.But beware, if Og does a REALLY EXPLOSIVE fart he blows his bog apart – and you lose your loo roll.

Davina Awarded The Drumond Park Og on
the Bog 4.6/5

Looks
like a funny game that any child would find hilarious. Standard box, easy to
get into and shows what the game looks like. Instructions very easy to
understand. My children knew
straight away the concept of the game. I knew my children and my nephew would
love it and they couldn’t wait to set it up and have a play. I don’t
think they would play it for longer than 30mins, it doesn’t stimulate their
imagination but they had lots of fun and were laughing while playing it. I
don’t think it would help their development as I think the age of children who
would enjoy playing it would already have those skills. It is a very simple
game to play so don’t think would stop playing because it is too
difficult. Looks well-made and very easy
to put together even for the children. It
is a little expensive and I think that would put me off buying it. A very good game and nothing any of us
disliked about it. I would
recommend. This game is a fun, laugh out
loud game for kids of all ages. Davina
Watterson – Ellen & Oliver 10 & 7 Years

Sarah Awarded The Drumond Park Og on
the Bog Game 4.2/5

I
thought the Illustration was good and would appeal to my children straight the
way, as does the name. Having 3 boys they find humour in anything toilet
themed. I thought it was well made and simple for them understand. It had a
good illustration which showed Og on his bog and you can see it relates to what
the game is about. It is very straightforward and easy to understand, the
instructions were clear and we could start the game quickly which is a big
bonus with having small children. They don’t have the patience to wait while we
figure out the rules. My children could understand the concept easily, even my
2 year old understood after a few games that he had to take the loo roll off
carefully as not to disturb OG. It is right up by little boy’s street. I
think it is aimed at the right age as he understood it easily and was laughing
at OG. I wouldn’t say it stimulated their imagination but it did engage them
and we play several games in one session without them getting bored
quickly. It was fun and interactive the
children loved the noises that OG made and would laugh. I wouldn’t say it
helped my 5 year old’s development in any way as he already is developed enough
to understand such things but my 2 year old would count the loo rolls and it
did help his hand eye co-ordination as at first he would struggle to get a loo
roll of the stick but a few games in and he was doing it with ease. He did also
teach him to take turns as he thought he could have all the goes at first and
it showed him how to share when we shared out the loo rolls at the start of the
game. The game is simple enough for him to play with just his brothers,
without our help however I felt that the game was over very quickly. We found
we soon collected 3 rolls so we would play several games in one session. Which
is good as it gives others a chance to have a go at winning but I think it
could have been a bit longer and sometimes we changed the rules to having to
collect more loo rolls to make it last a little longer. Also we felt that the
loo pole needed to be a bit more sensitive as the children could easily take a
loo roll off it without OG detecting they have done it and therefore winning
the game quickly. It is made with a high standard; it is solid and wouldn’t
break easily. I personally wouldn’t buy it at the R.R.P I feel it is a little
too high for this game. I love the name of the game; it is simple and appeals
to children. I love the game as a whole. It is easy to understand and fun to
play. I just feel it is too easy to win. I would consider buying it if it was
on offer. I would recommend it to friends. We all loved playing OG on the BOG,
it is simple and fun and we did laugh at the funny noises that OG made. Sarah Flannagan – Children 10, 5 & 2 Years

Good presentation, colourful box and
you could see the concept of the game.
Very easy game to set up and understand for both adults and
children. Both my children grasped this game
quickly. No concerns about my children
playing with this game. The game is OK,
by son loved the farting sounds and would have him in hysterics as just found
it so funny. You use spinner to outline
what you can do and if you can steel bog roll from Og or steel from another
player. Can be fast pace and competetive. My youngest loved the sound effects but my
eldest did lose interest in this game.
This is a basic game with some great sound effects and would not say it
really helped with anything other than learning to take turns. Quality is good. I personally feel this is more of a gimmicky
game and would not be one you would use over and over again. Good fun but comes out now and again. Personally for what the game does I do think
it is a bit expensive. Nothing I really
disliked about the game just do not feel it is challenging. My son loved the sound effects though. Personally I would not purchase this game but
I would recommend as it is a fun game.
Simple game, easy to set up and some great sound effects. Holly Mace – Bobby & Sal – 5 & 8
Years

A very good game and nothing any of us disliked about it. I would recommend. This game is a fun, laugh out loud game for kids of all ages.

Davina Awarded The Drumond Park Og on the Bog 4.6/5