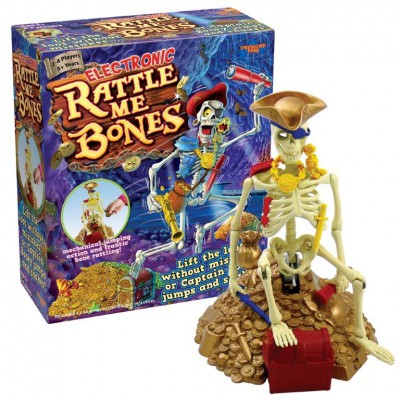 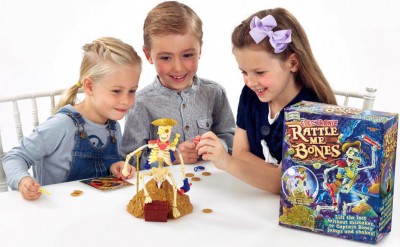 Take the treasure without waking Captain Boney. Just one tiny twitch and he’ll leap into action to scare you to bits.
Use the spinner to find which colour of treasure you have to take, then gently lift it off Captain Boney. If you waggle it too much, he’ll wake up and leap about, rattling and shaking to scare you away.
Collect three pieces of treasure, then try for his golden hat to win the game.

Packaging
was bright and colourful, well presented.Once
read a few times it was easy to understand and the more you play the game the
more you understand. Took a while for my son to understand we had to keep it
explaining it to him. I had no concerns
about my son playing this game. My son liked it when the skeleton shaked and so
wanted to keep making it shake. Very good for fine motor skill and hand/eye
development as it has lots of small bits. This game kept his interest for a
short while. The quality is OK but the
skeleton seems a bit flimsy. I did think
it is quite expensive for what it is, especially when there are cheaper games
on the market. It is a good game so
would recommend. My son did enjoy
playing but in short spells. Michelle Burgess – Harry 5 Years

This looked a fun game and presented in a
bright colourful box which you would notice in a store. A good concept to the game as you have to
collect the treasure from Captain Boney without making him shake. Patience required and Emma would be very
careful to remove the treasure carefully and not wake up Captain Boney. The concept of the game is easy enough to
Emma to understand. I had not concerns
about Emma playing this game ideal for her age.
This is a fun game. You have to
place all the pieces on Captain Boney and coins in the treasure chest then turn
him on and ready to go. Spin the spinner
to see which colour piece you need to take off Captain Boney without making him
shake. The object is then to remove 3
pieces and the Golden hat to be a winner.
You have to be careful when removing the pieces and hope he does not
shake otherwise game over. Emma enjoyed
the game and would concentrate to try not to make the skeleton shake. Was a fun
interactive game and Emma enjoyed playing with us and friends. It is good for moto skills and for patience
and concentration. Emma had fun with this game and kept her interest. The quality is good and the skeleton is well
made but the spinner board is a bit flimsy.
This could do with being a bit sturdier. This is a reasonably priced
game and on a par with other similar games.
This game is fun and we all enjoyed playing and Emma has had lots of fun
playing this game with friends too. I
would consider purchasing as a gift and a few people have asked where we got it
so recommended. QA good fun game which has kept my daughter entertained. Hollie Samuels – Emma 6 Years

Appealing packaging,
maybe slightly busy. Less would have been more. The concept of the games is
similar to other popular games. Pirates slightly more appealing to boys than
girls. My three year old boy got very excited at the picture on the box as he
loves pirates. Slightly too busy for me. A clearer picture of the game
with out all the busy background would have made this product more appealing.
Slightly cheap looking. Great concept. Similar to a lot of other products out
there. Easy to know the object of the game. My child understands concept.
Nothing complicated about it. Recommended age seems appropriate although I do
think a year younger would be more suitable, a 4 year old would get the concept.
The parts for the game aren’t tiny. My child was very excited when we received
the game we got all the bits out, got the batteries, read all the instructions
but we seemed to have a faulty one as the pirate would not work properly. I think we just had one that was faulty as
the pirate would not rattle and work properly if you woke him up. The
product is overpriced for its quality. Pirates items are a bit flimsy I would
say below £15 would be more reasonable if the product worked. I like the
concept of the game, easy concept. Good game to bring all the family including
smaller ones together. Kids were really excited to play with the game
but and it would have been a fun game to play if our one had worked. Just the luck of the draw we had a few
problems. Looking at the concept of the
game and how it works I would say this is a fun game for everyone to play and
would have kept my children entertained. Hannah
McCulloch – Darcy 8 Years

It is a good game so would recommend. My son did enjoy playing but in short spells.