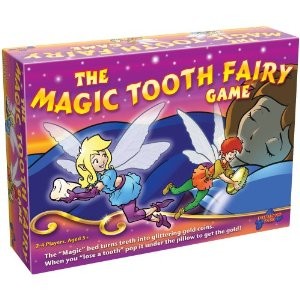 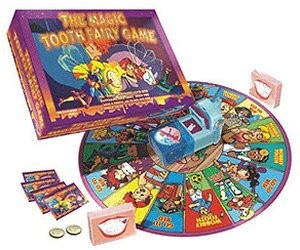 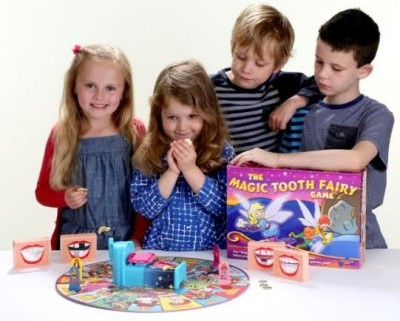 The Magic Tooth Fairy Game "magically" changes teeth into glittering gold coins in front of your eyes!
When a kid loses a play-tooth they place it under the Magic Bed’s pillow, plunge the Tooth Fairy Wand and hey presto their tooth has turned into a gold coin.Great game play recreates all the tension and excitement of losing a tooth – including that Wobbly Tooth Dilemma: do you have the courage to pull your tooth out – or don’t you?

I did think the game looked a little flimsy for the price.
The packaging is ok; it gets the point across and shows the game on the back so
you know what you’re getting but again looks a little cheap for the RRP. Shows
age 5+ so I would think it was designed for children that are my daughter’s
age. I like the concept behind the game, my daughter is at the age where she
loves the idea of the tooth fairy so the game seems a good idea for her. It is
easy to understand once I’d read through the instructions a few times and
played for a while but seems a little complicated at first. We have not seen
this game advertised before. My daughter understood the concept of the game but
needed to keep referring to instructions to play it as intended. I had no
concerns with my daughter playing with this game but I would if she were any
younger. It seems to need adult supervision and interaction to play as intended
and some of the pieces are a bit fiddly to use. With an adult playing along
then it keeps her attention for a while but she prefers to just play with the
bed part and swap the teeth for coins. It stirred her imagination as she then
took the bed part away to play with her other toys. As it is a bit complicated
at first, it helps with learning to take turns and counting. Fine motor skills
needed for getting the coins into the bed slot. It was simple enough for her to
play with without losing interest for a little while yes but after a while she
just wanted to play with the wobbly teeth and bed parts. Unfortunately the
build quality is not the best. The teeth don’t really stay in the backpacks of
the characters which is a big part of the game. The coin slot on the bed jammed
up when inserting coins (the coins turned sideways after going in the slot) and
there is no way of clearing it without taking all the screws out of the bed and
taking it apart. This makes the game unplayable. This would be solved if there
was a little hatch to clear them as I would imagine this is a very common issue.
It only survived being played with a few times before jamming up and becoming
unplayable. Had I bought it then I would have had to return it. It needs to be
better presented, better build quality and able to actually be used more than
once or twice to justify the price. I like the idea behind it, my daughter has
lost quite a few teeth lately so is excited by the idea of a tooth fairy game.
I don’t like that it broke so easily. When it works, it’s a fun little game for
a while. My daughter preferred to use the bed and coins for imaginative play
instead. Kate Onyskiv – Izzy 6 Years

The packaging is colourful and attractive to children;
though the inner packaging is only designed to get the product home; once
unpacked, you then simply end up shoving everything back in as opposed to
packing it away neatly. The children really enjoyed playing with it straight
away. They loved winning the chance to lose a tooth and put it under the pillow
to receive a gold coin. We have not seen this game advertised on the TV, online
or in magazines. The children did understand the concept of the game well. I
had no concerns at all with them both playing with it. The game kept the children
entertained for a few days. They haven’t lost a tooth yet and loved learning
about wobbly teeth. Playing this game does help with their child development
especially to put the tooth onto the backpack of your own counter. The process
of playing the game i.e. taking turns, missing opportunities, counting, and
playing fair is great for children. It is simple for them to play though an
adult playing along is recommended to help the children remember the steps of
the game to begin with. The quality of the game is good but I do think it is slightly
too expensive for a board game. I would recommend it to others; though more so
if it was reduced in price. It is a fun product for a child that is unique
compared to others on the market currently. It was great that it related to
something that will happen to them soon, and also incorporates some magic! Although
the children loved playing with it, the novelty soon wore off. For that reason I feel the price is a bit too
expensive. Emily Bradley-Smith – Isabelle 5 Years and Alice 3 Years

This game looked very nice and colourful. The packaging was
great; nice and colourful as it should be for the kids. The concept of the game
is good but it was complicated for my 5 year old. We have not seen this on TV
or in magazines but we have seen this game advertised on Facebook. I’m not too
sure about whether this game helps with child development; because it was too
complicated for him I don’t see my kid giving too much attention to it. I think
it is expensive for what it is. I wouldn’t buy this game as it was not for my
son but I would maybe recommend it to others. The packaging is nice but unfortunately
the game is too complicated for him. Katerina Uddin – Tereza 5 Years

I like the idea behind it, my daughter has lost quite a few teeth lately so is excited by the idea of a tooth fairy game.