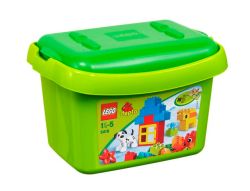 Creativity starts with LEGO® DUPLO® bricks! These safe, durable pieces are perfect for young hands and imaginative minds. Includes a cat, a window, flowers, and lots of bricks for building, all in a sturdy storage box with lid.

Very good. Well packaged nice variety of size and colour blocks, and easy to put together.  Packaging perfect and size and quality of the toy brilliant. This certainly kept Aiden entertained.  Perfect toy for Aiden and age suitability ideal. Playability very good could hold my Childs attention for at least half hour at a time. Very good at helping with hand to eye coordination, colour recognition, motor skills and cognitive skills.  Very easy for Aiden to play with and would be creative so did not loose interest. Aiden likes to play with the toy dog which came with the blocks with other characters he has.  Quality is extremely good and value for money.  Would certainly purchase more and recommend to others.   Enjoyable product which encourages imagination through building and play. Also compared to cheaper alternatives which I have previously bought this comes out on top in view of quality and ease to assemble.  Emilee Jeffers – Aiden Aged 2 Years 3 Months

Initial impressions were that the box doesn’t really contain a lot of pieces of Duplo. Overlarge box deliberately misleading, it is in fact mostly empty. Makes a handy storage box if you buy extra pieces. Duplo bricks would seem to be exactly the right size at the moment, mega blocks are to and Lego is just a bit to fiddly at the moment. Both the bubs enjoyed playing with the Duplo.  Pitched pretty much exactly right for the age, too big to eat, not big enough to use as a weapon against siblings.  Sam always has particularly enjoyed building things so the Duplo worked well, Ruth not so much but she did enjoy smashing Sam’s constructs up.  Chunky blocks, primary colours, construction toy. Ticked all the boxes really.  Ideal toy to play with and Samuel does not loose interest.  There really isn’t anyway to play with Duplo, other than the intended use, other than to throw it around a bit, at which point picking all the bits up gets old rather quickly.  Well made, substantial, obvious quality product.  There really doesn’t seem to be enough pieces to really justify the price tag.  Duplo generally we will no doubt buy, given that we now know that the bubs enjoy it and there at about the right age and size. This particular starter set I’m not as sure about.  Would recommend Duplo generally, but then again it’s a well established brand and product.  Overall pretty nice, would’ve liked more of the basic building blocks though. Pretty successful all round, more as a pointer to the kind of toys the bubs like at the moment. It rapidly became apparent that they’ve outgrown the big chunky mega blocks and grasped the smaller pieces successfully.  Mark Charnock – Samuel 2 Years 6 Months

The box looked exciting and looked fun to use it was small enough to store away easily and it made the kids happy when they see it.  The box is small enough to store away fine and it’s big enough to buy extra Duplo bricks and you could store them in there too.  The size and style where really bright and easy to use they clicked fine together and where easy enough for both of my children to use, the lovely colours of the blocks make it nicer to use.  you don’t get much in the box and once the initial excitement wore off the kids soon lost interest as there was not enough blocks in the box to keep them entertained for long I think they need to supply more blocks. I think the product is great for kids the bits where not too small for my 2 year old to use. The blocks are big enough for the safety but small enough for the child to be able to hold them.  At first they where both really excited bout the blocks and played with them for about half hour but after that they got bored as there was not enough blocks to play much with they went back to them a few times but then just started using the box to put other toys in and didn’t want to play with the blocks anymore.  I played games with them asking them to show me the colours they had which helped my 2 year old learn colours and they where learning to build towers and try not to let them fall down.. It is a simple toy but after a little while my children got board as there was not enough in the box to keep them occupied for long enough they need to add more blocks to the box.  They have found the box very useful playing games with it guessing what’s in the box and using it to carry round other toys he also tried to use it as a step as well to turn the lights on and off.  I thought the quality of the toy was fantastic the way its made and all fits together nicely is great with its lovely colours it makes it a nice fun game to play.  I personally would not pay the price for the box if it had more blocks inside then I would pay the price as it’s a good toy just lack of blocks makes it a low scare for me.  I would recommend the product to people as it is a good product that is well made but I would make a point of saying you don’t get much for your money.  The product is lovely and colourful all the blocks are different colours, you can make a little scene with a window and a dog, the box is great for storing away and you have room to add other blocks into he box too, the box is handy to take out with you if your going somewhere and want to take a few toys. The amount of blocks you get in the box was a disappointment as there is not as many as I would of thought there would of been and with that it made my children bored easily as there is not much you can do with a few blocks. Over all it’s a good product made well and lovely and bright for your children I just don’t think it’s worth the money.  Katie Hatton – Jack & Jessica Aged 3 & 2 Years

Enjoyable product which encourages imagination through building and play.