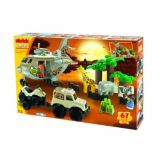 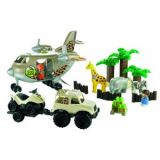 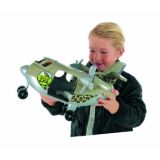 Well presented packaging that is clearly described and labeled. You know from looking at the packaging what you are going to get. Looks like it has a lot of potential for many different role-play games/avenues of learning. However a little daunted by the self-assembly element of the product and I question how robust the product will be in the hands of a toddler. Once we built the toy I thought it was a great size and has many avenues for role-play situations. The pieces were also a perfect size for little hands. It captivates his imagination and provides opportunity for many hours of imaginative and independent play. Great value as each element of the toy can be played with individually as well as collectively. As part of the toy requires self assembly I was concerned that it would perhaps keep falling apart and require constant rebuilding however this was unfounded and the toy, once assembled has proved to be robust. We have had hours of fun with this toy. It is easy for the parent to get involved in the play but also engages the child in individual play too. It’s fantastic that it includes so many elements (plane, car, trailer, quad bike, as well as stationary figures and building blocks) so it does hold attention and although the main part of the toy (the safari plane) seems to be the main element that the child keeps returning too, the other elements all hold an appeal to the child. I can see this toy being used more and more as the child develops to make vaster role-play scenarios. Brilliantly designed to be as simple or complex as the child chooses. I would say that this toy is comparable with other products in the same genre and even surpasses them because of the unique opportunities presented by the individual components of the toy. You get quite a variety included within one toy, although I am not sure that this would be clear on first impressions, you only realize upon starting to play with it how many different styles of play are presented by the toy. I can’t fault this product and it has perhaps become one of our most played with toys. It is something that my child keeps going back to. The product has certainly surpassed the expectations that I had of it based on first impressions. The self-assembly required was slightly off-putting however I needn’t have worried, the product has remained robust. It is an incredibly adaptable toy. I particularly like the way it can be played with either as a whole set or each element can be played with individually. The product suits our current age range/development level perfectly and I can already envisage that it will continue to grow with the child rather than become one of the toys to be put aside because it has become boring. Vikki Wild – Rhys 2 Years

A very good product! It’s a great size for the appropriate age and my son also loved the stickers. My son really enjoyed this product and played with it quite a lot. The only problem we had was that my son gets frustrated when if he can’t get the little catches for the doors to close fully and this happened quite a bit with the aero plane. The products was really good for capturing my son’s attention, it encouraged his imaginary play and problem solving too for example how to fit all the animals on the aero plane. Good quality toy, the aero plane has a very smooth wheel action and turns extremely easily which my son loved. It seems a very good price for the toy. There are 3 vehicles and lots of accessories and the quality is good. The product was easy to put together although some strength was needed to ensure that all the pieces came together fully. My son loved the style and looks of the toy especially the stickers and the animal figures. I believe the toy has aided my son’s imaginative play and kept him entertained, he particularly liked to take the animals to bed after playing with the toy which is a good sign that he has enjoyed playing with the toy. We did have some frustration with the catch which closes the flight deck and the hatch of the aero plane as they often did not click in properly which my son found quite frustrating. Overall I think the product is really good quality and good value for money. Christine Raine – Paul 2 Years & 11 Months

It is actually very well put together, not flimsy and the parts don’t pop out. Overall a great toy that is highly recommended by me and my son!