Saved In Toys 5 Years Plus and Family Toys & Games 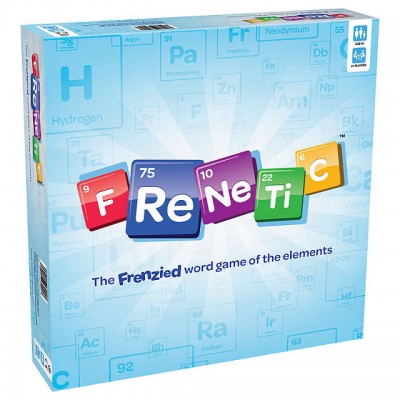 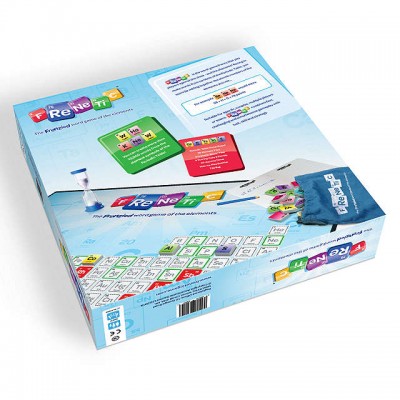 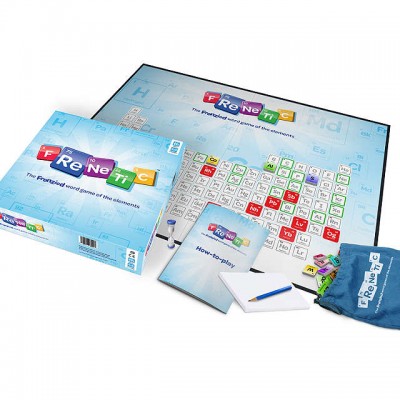 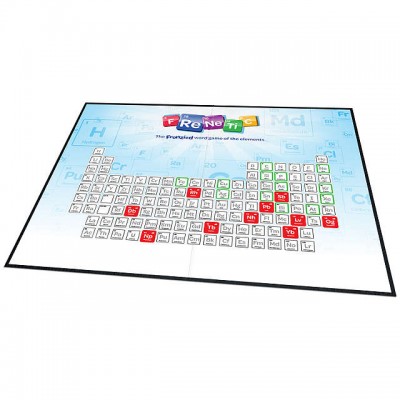 Suitable for 2 or more players from 8+, FReNeTiC offers wide appeal, with everyone playing all the time and combines skill, strategy and luck at a frenzied pace.Players race against the clock to form as many words as possible using the element symbol tiles, adding together the atomic numbers of each tile used to create a word. For example : Ba Na Na = Banana = 78 points! Amazingly there are over 10,000 words that can be created using combinations of the element symbols of the FReNeTiC game board. FUN, FrANTiC, AcTiON is guaranteed.

Victoria Awarded The Frenetic Board Game 4.5/5

We were unsure initially as the box didn’t give too much away. However, we love board games in our house so were keen to see what this one was about. The packaging is pretty much what you would expect from a board game. The outside is bright and loud, giving a few clues as to what lies inside. Inside the box, the board and all the accessorise fit in nicely. There isn’t much more to say, it is there to do a job, and does it well. My husband and I had to read through the instructions a couple of times till we were comfortable playing, even then we had some minor disagreements over the rules. In the end, we played with what we thought they meant and enjoyed it. Overall, they are a very clear set of instructions that do explain most of the rules very well, but have them too had for reference during the first few games. The idea behind the game is fantastic. We thought at first that it was going to be very similar to a very well-known word based board game, how wrong we were. Not only does the game teach your kids the periodic table, it gets them thinking too, and thinking hard. Its refreshinglydifferent, but a challenge at the same time. Contents wise, everything you need to get going is in the box. As for storage, we got it all back in at the end of the game so the box is well thought out and suitable.My daughter did understand the concept of the game but it did take a little explaining. However, your kids need to have a good grasp of English to be able to make words quickly from the tiles.The element symbol times and atomic number tiles was another good aspect of the game. Other games only use small, or even numbers making tallying points easier. This is great when they have to add 53 (doubled) to 97 and 4. Really good idea for a points system. The game did become exciting but 2 mins just isn’t long enough for young children to make words. A better option may be to have a few different egg timers included to allow extra time for each round. We stuck to the 2 mins, it just took a few more rounds for more words to start coming out. The bonus points for certain elements makes for a good twist too. My daughter enjoyed this game, so much so we had a hard time getting her to put it away. It was always a case of ‘Just one more game!’ It was the constantly wanting to play it more. She just didn’t get bored of it. Lots of different reasons. It teaches children about the periodic table. My daughter enjoyed trying to find all the elements as they came out of the bag. She was curious to learn why they all had different numbers, which I managed to give a simple explanation for. Then there is the English, it’s difficult for an adult to make words from Au, Fe, Etc. never mind a child. After that there is the maths as described above. So in one game, they have managed to get in, Science, English and Maths. What more could you possibly want. We did play this game as a family. What we found we had to do was team an adult with a child. This was due to our kids being right on the lower age limit. As such they struggled to make words till the later rounds unless they had help.Weenjoy playing games all year round, so this will definitely be getting brought out at Christmas. We would play this game one night a week, 4 game nights in total. We are a fairly competitive family so yes game was addictive. We found that our scores were very close by the end of the game; as such we would often play 4 or 5 games straight after each other. I would have preferred the tiles to be made of something similar to plastic to ensure that they would stand up to the test of time regarding wear and tear. That being said, they were still very good quality card and I sure will hold up well. I feel that it is maybe a little on the expensive side. Marketing it the lower side of £20 would make it more appealing in my opinion. That being said, we have had plenty of fun with it and I’m sure we will continue to enjoy it. I loved how different it is. I can’t think of any other games out there that are even remotely similar. This is definitely its unique selling point in a crowded market.We are always looking for different games for our family. I don’t think this would have been our first choice, but this is down to the fact we have younger children who like to get involved in the games to. I would recommend as we have lots of family visitor so this will definitely getting brought out when they come to visit.This is a great game as it does something different. Without knowing, it is slowly educating you and in a great laugh along the way.We have had nothing but fun playing Frenetic. Despite it taking us a while to get our heads around the rules, we still enjoyed it. What makes it more enjoyable is when the kids make a word from the element tiles that you as adults hadn’t spotted. It is a unique game and one I’m sure we will continue playing for years to come. If I was going to give it any negatives it would be I feel the price is slightly too high and I’m not sure how long the tiles will last in the long run. These however, are minor complaints when compared to the fun and education value the game brings. Victoria Gibbons – Hannah 8 Years

Naomi Awarded the Frenetic Board Game 4.2/5

Looked fun and different from any other game I have seen. Arrived well packaged and colourful packaging. Instructions clear and easy to follow. Fab concept for a game for older children and adults. Really makes you think.No issues with content and very easy to use and store. The game is marketed for ages 8+ so only really suitable for one of my children. My youngest had fun matching the tiles to the board and my eldest enjoyed the challengeof making words. Neither of them could play the game as intended but still enjoyed and as time goes on can see the game changing with them.My child made words using the tiles but still a little young to play in the correct way. Personally for us we didn’t use the timer. My eldest gets very stressed under a time limit and I know he would not have enjoyed. Both children played their own games with the board and tiles! This board game did keep my son entertained. I do feel this game is educational. Was nice to talk to my eldest about the scientific symbols and know the game will grow with him and will spark his interest as he moves through school. We all played together as a family taking it in turns to make different words this is a game you can play all year round. The game makes it out the cupboard at least once a week. This game has been brought out to play several times so I would say so yes it is addictive. This is certainly well made. Similar priced to other products on the market. I really liked the science aspect made it enjoyable for us I don’t think I would buy personally but only because I tend to buy games suitable for both children to play so the 8+ age would put me off. I would recommend to families with older children. The game was different from others on the market. It was a great concept and enjoyed in different ways by different aged children (even if not how it was intended to be played!) I can see it being a game we play for many years. Naomi Farrar – Lucas & Oliver 8 & 4 Years

Charlotte Awarded The Frenetic Board Game 3/5

When this arrived it looked far more advanced thank I was expecting. The packaging is bright and colourful. The instructions we found quite difficult to follow. Personally I felt this game appears to be too confusing for this age group of children. The contents of the game were very easy to keep safe and store. Unfortunately my daughter found the game far too confusing. I am sure for an older child the concept of using symbol times and atomic numbers would be beneficial but we found that there was too much going on in this game. My daughter did not enjoy the concept of playing this game against the clock. For us this just was not the game for us and my daughter did not want to play this game after a few attempts. I believe that if the subject is of interest to the child it would be purposeful but my child barely knew what an element was. We did all play this game together. Not a game for our family unfortunately. We only played this game a few times as my daughter did not enjoy it. The quality of the game and contents is good. Personally as it was not a hit in our household I do not believe good value for money. The concept would be good for older children or for educational purposes but I wouldn’t aim it at primary age. The game is too confusing and baffling for younger children without any real attraction. Children want excitement from a board game and this just didn’t work for us. Charlotte Goodfellow – Chloe 10 Years

Despite it taking us a while to get our heads around the rules, we still enjoyed it. What makes it more enjoyable is when the kids make a word from the element tiles that you as adults hadn’t spotted. It is a unique game and one I’m sure we will continue playing for years to come.

Victoria Awarded The Frenetic Board Game 4.5/5