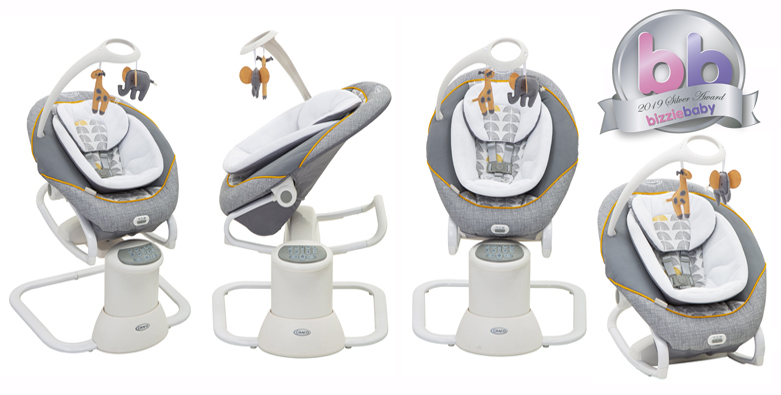 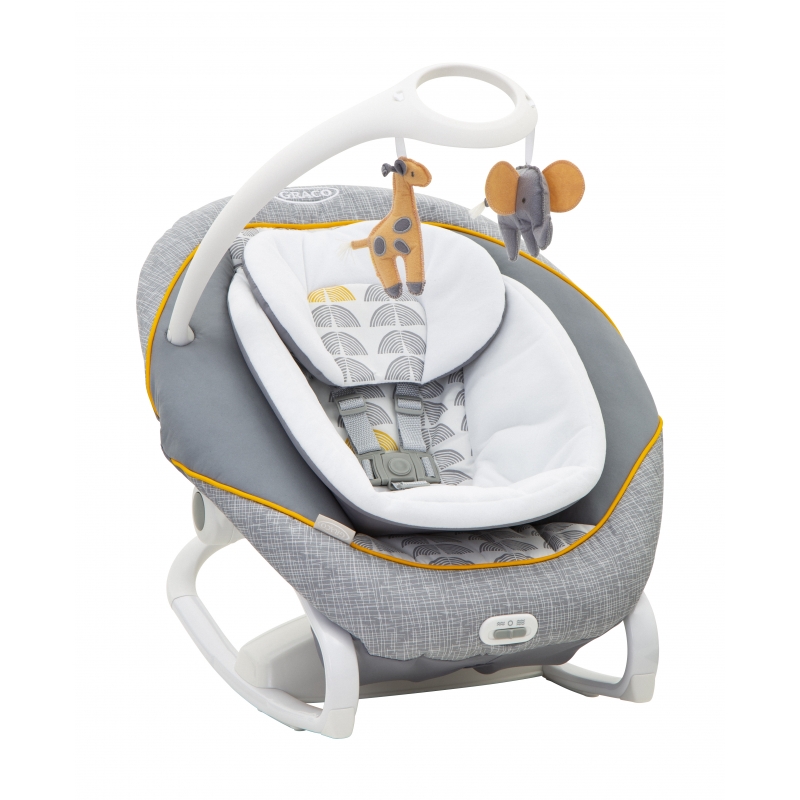 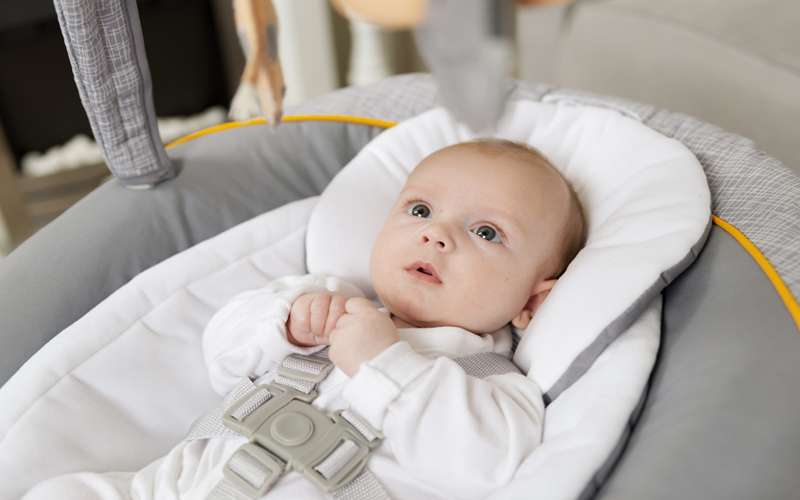 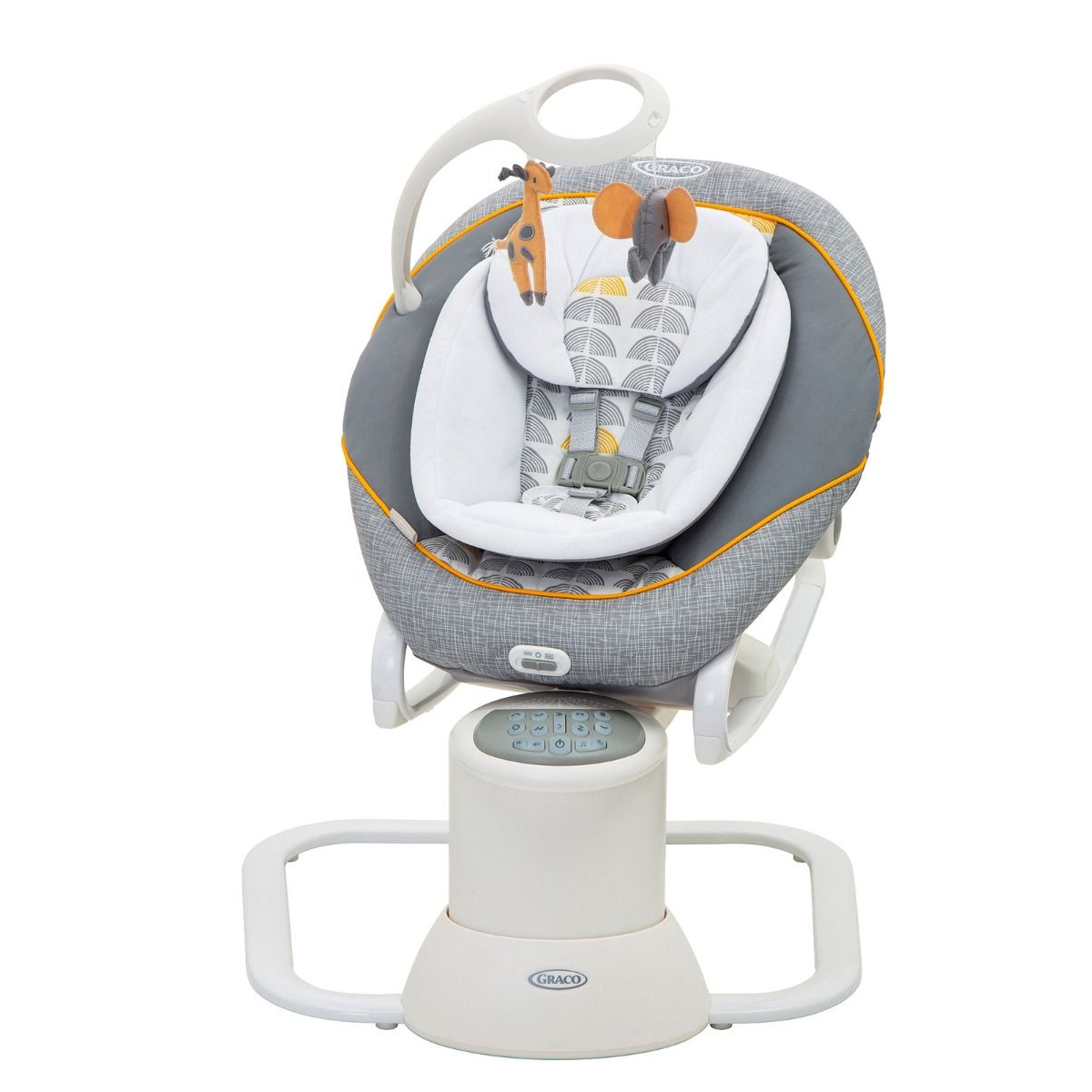 Graco All Ways Soother/Swing – Horizon
The innovative All Ways Soother with Removable Rocker is a multi-use baby swing that offers 16 soothing motions for the most smiles. Eight ways to swing mean more soothing options to comfort baby: arch, swing, bounce, figure 8, circle, wave, zig-zag and sway.  Two directions mean baby can swing side-to-side or front-to-back to keep baby smiling . The swing seat conveniently doubles as a removable baby rocker to keep little one happy by your side throughout the home. The plug also provides added convenience, while a 5-point harness keeps baby cozy and secure.

Amazing. Great medium size packaging. Thought would be much bigger but was packed very well. I think it’s very useful product, especially if you have more than one child. For example twins, triplets etc. Instructions were very easy to follow. Didn’t have any issues. I managed to assemble the product in roughly 7-10 minutes. Steps were very easy to follow from manual. The 15 soothing motions were very easy to use. With a press of button mode would change. My little ones favourite one is arch swing. The most soothing one we liked was twinkle little star. My favourite would be no 8 but my baby won’t agree with me on that. As mentioned above my little one loves arch swing mode. She seems to settle the most with that one. We have not used the swing seat as a baby rocker yet but will be using it probably once baby starts weaning.  I would say the baby rocker would keep baby safe and I wish that it could be used for longer than 9 months. We had little bit of issue with the harness at the start since the belts that were supposed to go over her hands were extremely tight and were cutting into her skin. I have stretched it to the fullest but was still the same case. I am now only using lower part buckle for my child. The 6 swing speeds are really good and my little one prefers a bit faster mode. The two swing directions are a great addition to this soother swing because it moves the way mums rock their children. I think it’s very comforting. It was very easy to adjust the swing speed setting.  You just press same button until you reach the speed you like. I didn’t use recliner yet but will be using it once baby reaches the right age group for that. My little one loves playing with the mobile toys and she loves the colours too.  We used this every day for at least a few hours a day. We used this in the living room during day as she prefers her cot bed during night. This is a high quality sturdy product.  I would highly recommend this to everyone as great value. I loved the different moves and sounds as they were very useful. If baby gets bored of one you get a lot more options which is a bonus.  I would buy this as it really helped me a lot when baby was cranky and loud.  I would recommend for many reasons and one of them would be keeping both baby and mum relaxed and happy. Not full marks just due to the issue we had with the harness belt.  Apart from this I absolutely love everything else about this product. Firstly was extremely easy to put together. Colour is very neutral and I love it. Toys were great addition to the product as my little one loves playing with them. Different speed, sound and moves make it so special. My little one could spend all day in it if she could.  Her favourite move is arch swing and she loves different songs on the product provided. I love the idea that bouncer can be removed and used all around the house and looking forward in using it that way once my daughter gets to weaning point. Overall perfect product and I wouldn’t mind paying for it as it’s worth every penny. I am glad I have been chosen to try it out and thank you for that. I’m sure we are going to use it to the maximum until she’s 9 months old. I would highly recommend. Josipa Setka – Maya 3 Months

The item looked quite large and clunky.  Great idea, enabling parents to put the child down and allow them to self soothe. The instructions are easy to follow and straightforward.  I found this very quick and easy to assemble. The soother is so easy to use, once plugged in you just select which option you’d like using the keypad. I was a nice option to have a selection of 15 soothing sounds.  However my daughter wasn’t too fussed on these, I’m sure other babies would find these really soothing. We tried out all the soothing option but the bounce was the favourite and many times my daughter fell to sleep with no fuss whilst playing. The bounce was Rosie’s favourite, perhaps because she loves to be softly bounced to get to sleep, the motion was lovely and soothing for her. It was very handy to be able to remove the swing and use as a baby rocker. It’s easy to move from room to room and Rosie was really happy in this. The baby rocker was easy to use and kept Rosie safe.  It also allowed me to carry on with household chores whilst keeping Rosie close by.  The 5 point harness was easy to use however it did feel quite flimsy. This does have a 6 swing speed function, but I did not find this function made much impact. It was nice to have a two swing direction facility but I do not think it was really required.  Personally I was happy and mainly used the original speed however I can see how some people would prefer the option to  change therefore I think this is a useful option to have. We did not really use the swing recline positions option.  This was only because our daughter is quite petit therefore the laid back position was the best and most suitable for her however it’s good to have these options and I’m sure we will use them as Rosie gets older. The adjustable mobile with removable toys was great to keep Rosie entertained.  However,

They could have been slightly bigger or lower with perhaps a bell or something that made a noise; I thought they were very basic but very useful to have. We mainly used this mostly in the morning each day. We have this in the living room and Rosie sits and plays in it most mornings. I think the toys let it down but overall it’s a great high quality product and Rosie seemed really comfortable and happy in it. I think it is slightly too expensive, although Rosie enjoyed it, I personally wouldn’t spend £200 on this product. It was great to have the swinging option however Rosie was just as happy in the rocker. The swinging option is a great way to soothe the baby allowing you some hands free time. Perfect for a baby who wants to be rocked but doesn’t like to be constantly held.  Personally I would not purchase this as I felt it was too expensive, Rosie would be just as happy in a rocker which would be half the price. I would recommend it as it had been really useful to have and I know friends who would also enjoy this product. I felt the toys let the product down and the overall price. The product is really comfortable and snug for the baby helping them feel safe and secure. The variety of movements is great. It does take up a large space as it’s quite big and you need to allow space for movement. It’s great that you can use just the rocker and move this around the home. The toys do look cheap and could do with being a bit more exciting. The strap also felt very flimsy. Megan Beckley – Rosie 3 Months

I would recommend as it is worth the price and would definitely be worth investing in if planning on having more children. This product exceeded my expectations and conquered my scepticism. My overall experience has been very positive. I have been pleasantly surprised at how effective it has been. It had not been 100% effective as my baby is currently teething and there are times in the evening when he becomes very distressed and only a cuddle will do, but for general daily use it has been so useful. I seemed previously unable to put my baby down, he wanted constantly to be held and would not settle out of my arms. It is nice to see him soothed and simulated by the product, and looking safe and comfortable. It is an added bonus to have regained the ability to eat my meals with both hands again, instead of having constantly to joggle him with one arm.