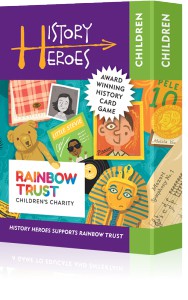 History Heroes Children: an award winning  game to educate & entertain:40 of the most significant children in history on beautifully illustrated cardsWin the cards by guessing the heroes from the facts read out from the cardsChoose your level of fact from green to red: easiest to hardA great game for all ages and stages to play togetherDiscover how much you know and learn what you don’t20p from each Children game sold goes to support Rainbow Trust Children’s CharityHistory Heroes Children: a History Heroes card game containing individual cards of History Heroes’ forty children throughout history, who have helped change the world and the lives of those around them. Each card is fantastically illustrated to represent the specific Child Hero and shows their dates, their flag of birthplace and seven memorable and often moving facts about them.Chilling with History Heroes’ CHILDREN game History Heroes’ Children range from leaders, such as the ‘boy king’, Tutankhamun, Joan of Arc and the Dalai Lama to campaigners, such as Malala Yousafzai, the nineteenth century Match girls and America’s civil rights campaigner, Claudette Colvin, who, aged 15, led her own protest on a bus against segregation in Alabama nine months before Rosa Park’s famous stand for equal rights. Child prodigy performers and artists such as Mozart and Picasso rub shoulders with Shirley Temple and Stevie Wonder. Children, who led extraordinary lives, such as Laura Ingalls Wilder, Helen Keller, Victor of Aveyron & Mary Anning mingle with Child heroes, who simply ‘made’ history: Lady Jane Grey, the Princes in the Tower, Victor of Aveyron, Louise Brown…the game contains an extraordinary, inspirational range of boys and girls in history.There are many different ways of playing History Heroes’ Children card game and you can make up your own rules as long as everyone playing agrees to them! The aim is simple: you win the game by winning the cards and you win the cards by guessing/knowing the facts.  You can use the images as clues and you can use the different levels of facts to make it as easy or as hard as you want to play the game. You can also play the game at different levels within the game so that all ages and stages can play together. The green facts are the easiest working down to the red facts, the most difficult. You can, of course, use the joker fact at the bottom, too, to overrule them all!History Heroes  is also proud to support inspirational children of today. 20p from each Children game sold will go to help Rainbow Trust Children’s Charity work to reach all 6,000  families with a life threatened or terminally ill child in England, who could benefit from their services. Learn more about their work here: https://rainbowtrust.org.uk/

It had interesting packaging the cards were a good size to hold. The girls liked the pictures at the top of the cards, also the flags of where the facts came from oh & the joke fact! The girls were excited by the packaging and they liked the font it was printed in. The illustrations gave the girls something to talk about. The girls like the way the cards were written by the person they were about. The games chosen characters were spot on. This game is stimulating and my 13 year old enjoyed it but it worked better for my 9 year old. We enjoyed the game as a family and the kids enjoyed winning against the adults. It was fun! Interesting and full of facts they would not have looked for before. This is great value for money. I would purchase and certainly recommend. A fact & fun filled game to get all ages playing! Francesca Hills – Isabella & Mia – 13 & 9 Years

Looked a bright colourful card game. Well packaged, colourful design and my children were looking forward to finding out more. The illustrations on the cards were good and got us all talking about various facts. This game is fun for all the family, informative and we found out a few things we did not know. The characters are interesting and made the game fun. We really enjoyed playing this game as a family as we all love history and was great way to learn. A stimulating fun game for everyone. Superb value for money. I have already purchased one as a gift and have recommended to lots of friends and family. A really great fun packed educational family game which we all loved. Kerry-Anne Stanley – Suzi & Jack – 8 & 12 years

Looked interesting game when arrived. Looked good quality and highly colourful packaging. My child wasn’t overly keen. He felt the
questions were complicated and the process to long. He got bored rather quickly. The illustrations were good but my child felt they were a little bit dull. My youngest did not get into this game as too much text on the cards for him presently. The chosen characters were good but some were boring. I personally think this game is for an older child and is something we can keep for Thomas to go back to when he is a bit older. This is an ideal game for any child interested in history. This is a good educational game but I feel needs a bit of fun injected into it. Daniela Taylor – Thomas – 4 Years

It was fun! Interesting and full of facts they would not have looked for before. This is great value for money. I would purchase and certainly recommend. A fact & fun filled game to get all ages playing!