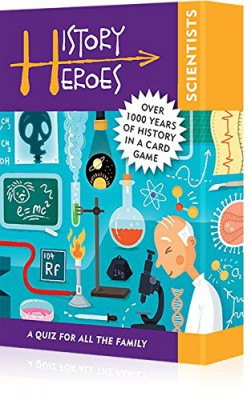 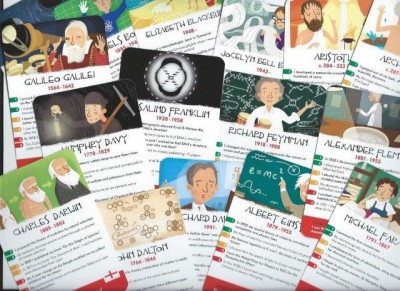 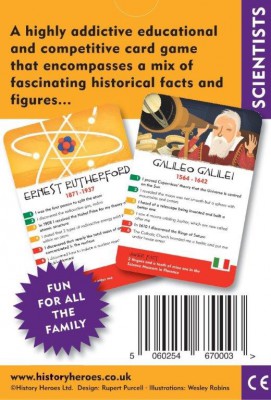 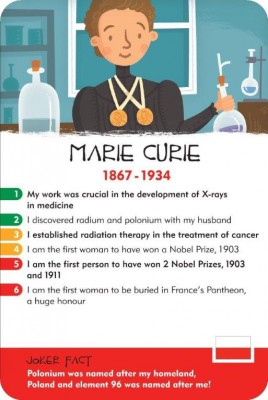 Scientists – a History Heroes card game: Our pack of Scientists contains individual cards of History Heroes’ forty greatest Scientist Heroes. Each card is fantastically illustrated to represent the individual Scientist Hero and shows the scientist’s dates, their flag of birthplace and seven gripping facts about them.Our Scientist Heroes start with our dear, first century BCE friends: Archimedes and Aristotle and then races through the centuries past scientists like Copernicus, Galileo, Sir Isaac Newton, Robert Boyle and Bunsen. On past the likes of Huxley, Jenner, Darwin and Curie and on to our twentieth and twenty first century heroes, such as Rontgen, Rutherford, Joliot-Curie, Hodgkin, Franklin and Hawking. You’ll find these and many more in Scientists Heroes.There are many different ways of playing the game – and you can make up your own rules, as long as everyone playing agrees to them! – but the aim is simple: you take it in turns to test each other on the facts, and/or image, and if you know the facts and can name the scientist, you win the card(s).There are seven gripping facts for each scientist: six range in difficulty from green, easiest, to red, most difficult. If you choose, you can use the seventh, the Joker Fact, to overrule them all!

My initial impression was that the game was well made with concise facts and is colourful. The packaging is colourful and the images on
the front of the box are fun and eye catching for children and adults alike. Although there are various ways to play the game, the gameplay itself is easy. My children are 8 and 9 and are at an ideal age for the game. They are able to understand both the gameplay and some of the scientific facts on the cards. Due to the number of cards and different ways to play the game, my children were entertained for over 45 minutes. This game helps children learn facts, understand and learn scientific language and improve spelling and vocabulary. The game is a simple game, however the facts behind some of the scientists needs explaining to the children. The cards are made from robust quality material which is ideal for children to use. I believe £8.99 is a fair price to pay, especially due to the level of detail on the cards. I value educational games for children and I would purchase this product along with the others in the range. This game is something I would recommend, especially for children who are in the final years of primary school when their reading is of a suitable
standard. This product is fun and easy to use. This game is a great idea for taking on holiday or for playing on a rainy day and can be enjoyed by all the family. Rosie Gard – Amy 9 Years and Kai 8 Years

This looked like a good quality and interesting game. The packaging was great quality. The concept of the game is great; though better
for older children. My children did understand the concept. This game is great; it has very interesting facts and the game can be varied. It does help with your child’s development such as turn taking, listening and general knowledge. This game is simple enough for them to play without losing interest; probably even better for older children who have learned about more of the scientists therefore in a better position to guess. The quality is excellent and offers excellent value for money. I would definitely buy this again; especially as a gift for older children. I would recommend this game to other people. We loved the product; it is a great family game. Emily Crombie – Miller 10 Years and Alexander 8 Years

My daughter loves to answer questions so I knew she would love this game. The packaging was lovely; it attracted my daughter to it straight away. I thought the concept of the game was really good. It’s fun for all the family to join in and educational at the same time. Ellie understood what she had to do; I think it is quite straight forward and easy to get going. It did seem to keep her attention for quite a while; we all joined in together which probably helped. It definitely helps with their child development; taking it in turns and gets their minds thinking. The game was very easy to play; we have had family members join in too and they found it very interesting. I think the quality is really good. It’s a fun educational game. It does offer value for money; I would definitely buy this again; it would make a great gift for Birthday’s or Christmas. It has already been recommended to quite a few people already. It’s a great game that can be enjoyed by all the family. Helen Thomas – Ellie 9 Years

This game is something I would recommend, especially for children who are in the final years of primary school when their reading is of a suitable standard. This product is fun and easy to use. This game is a great idea for taking on holiday or for playing on a rainy day and can be enjoyed by all the family.