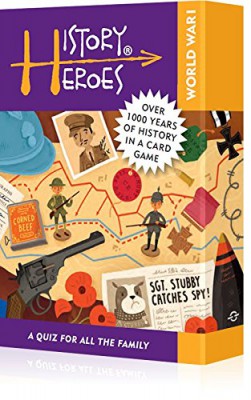 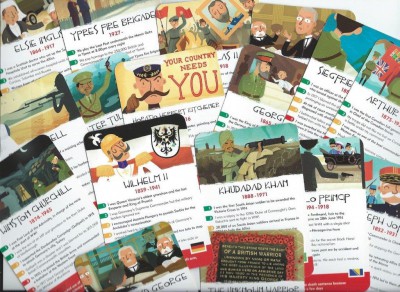 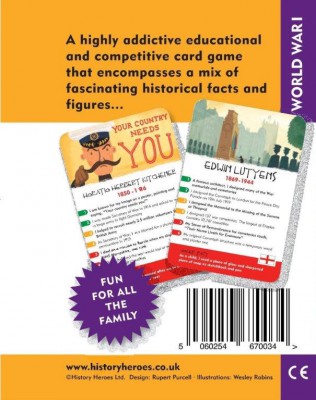 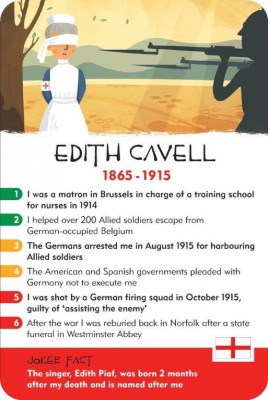 World War 1 – a History Heroes card game: Our World War I pack contains individual cards of History Heroes’ forty greatest World War I Heroes. Each card is fantastically illustrated to represent the specific World War I Hero and shows their dates, their flag of birthplace and seven memorable and often moving facts about them.Our World War I Heroes start with the great unsung heroes: all the animals who served in World War I – they all share one card, otherwise there wouldn’t be room for anyone else in the game! World War I History Heroes covers military figures like ‘Black Jack’ Pershing, Marshal Joffre and Field-Marshal Haig. King George and his cousins, Kaiser Wilhelm II and Tsar Nicholas II feature along with political leaders like Lloyd George and Woodrow Wilson.  All of our Heroes shaped and influenced World War I from Edith Cavell to Winston Churchill, from Flora Sandes to Siegfried Sasson and from Walter Tull to the Tunnelling Companies. You’ll find these and many more in World War I History HeroesThere are many different ways of playing the game – and you can make up your own rules, as long as everyone playing agrees to them! – but the aim is simple: you take it in turns to test each other on the facts, and/or image, and if you know the facts and can name the World War I Hero, you win the card(s).There are seven gripping facts for each World War I Hero: six range in difficulty from green, easiest, to red, most difficult. If you choose, you can use the seventh, the Joker Fact, to overrule them all!

My daughter is learning about this subject at school so this was great timing. The packaging was good; kept cards intact nicely. The concept of the game is really good. It’s a great game to teach children facts about the subject. Both my children enjoyed this card game. They have played with it quite a few times now. It definitely kept their attention for quite a while. This game makes them think; they thought it was fun. This is a really easy game to play. I think the quality is really good and offers excellent value for money. I would definitely buy this again; in fact I have been looking at other games on their website already. It’s a great game that’s fun and educational at the same time; excellent. Gemma Watson – Claire 9 Years and Corey 8 Years

I thought this looked like a good quality game; quite compact. The packaging was colourful and interesting; very attractive. The concept was really good; I found it easy to understand. My children (8 & 10) were able to understand how to play the game too. They were happy to play this for a while. It is simple for them to play but they did get bored after a while. The quality is great quality; it looks like it will last. Although I liked the game, I wouldn’t pay the price for them, although they are informative. I would buy it if it was a bit cheaper. I would still recommend this game to others. It is well made, great information and easy to take out and about. Natalie Underdown – Ellie 10 Years and Joe 8 Years

My initial impression of this game was good. I thought the packaging was great. Nathan understood the concept eventually but I did have to help in the end; the theme is really hard. Unfortunately he lost interest very quickly. The quality of the game itself is really good. I do think it is quite pricey though for a game of cards. We played altogether, but even I found the questions hard, let alone an 11 year old or a 9 year old. So everyone lost interest within a few minutes. The concept is brilliant if it would have been in a different theme. Monica Canalias Soriano – Nathan 11 Years

I would definitely buy this again; in fact I have been looking at other games on their website already. It’s a great game that’s fun and educational at the same time; excellent.