How To Train Your Dragon Battle & Collapse Playset 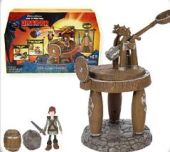 The perfect Arena where vikings can master their Dragon battling skills. Comes with a tower that has a launcher on top on top to shoot projectiles. 5 Years +

£14.99 Available in all leading Toy Stores and also online www.spinmastertoys.co.uk
BUY NOW - How To Train Your Dragon Battle & Collapse Playset

How To Train Your Dragon Battle & Collapse Playset Reviews

I thought it looked exciting and intriguing at the same time.  The children couldn’t wait to look inside at its content and start playing. I thought the website was bright and appealing .I think young boys would be hooked straight away especially by the video and its commentary.  You become immersed in the fantasy world of toy figures almost instantaneously. What a wonderful range of products too after exploring further not just fantasy toys and not just for girls. Two things that really stood out were the graphics the way the pictures of the products pop up and rotate – kids really loved this.  As a parent loved the biography of the company felt like I was dealing with a nice family firm rather than a faceless multi national.  Good to see mention of social responsibilities etc.  My little boy loved playing chuck the boulder with the toy and acting out fantasies with the character.  Just found the instructions hard to follow they seemed to refer to a similar product rather than the exact set I had so had to figure a lot of it out myself.  This took time and so was frustrating for my son. My son varied his play so that he aimed the boulder at other characters and objects he had in his play box.  It made him engage in fantasy play that also involved some story telling which was good.  But think for price a dragon could come in the set also. Definitely hand eye co -ordination he is a crack shot now!  He learned to share and take turns with his sister… Also some historical learning as we talked to him about periods of history such as medieval and Viking times. My son engaged in play for about half an hour at a time with this product I think the physical aspect of the product helped to maintain his concentration.  Also the mystical context of dragons. Good quality the product certainly stood up to some quite strenuous play!  The character for example was a good likeness to the one in the film and good use of detail in his costume.  I think it is expensive for what it is to be honest.  I would buy it for my own children but wouldn’t buy it as a present for somebody else as it just doesn’t look like you have spent a lot! Great fun great opportunities for fantasy and role play with the ability to incorporate existing toys and figures into the game.  If you go to McDonalds you can use the dragons you get with your happy meal at the moment like we did! Kirsty Chrysler – Joshua 7 Years

Pia Awarded the How to train your dragon play set with Dragon character 3.3/5

The toy looks very good and the packaging makes it look very exciting, my son couldn’t wait to open the box and play. The items received as a set were good too; the extra dragon to play with made the set more complete than the main play set would on its own. Quite good entertainment value but child loses interest after a short time. No concerns about my son’s safety but I was concerned the ball may get lost or be fired at people or breakables around the house.  This toy definitely stimulates the child’s imagination. They will pretend they are in battle and fire the ball to attack.  The toy is very simple. It may be a little too simple as my son quickly lost interest. Once you’ve fired the ball a few times there’s not much else to do. Good quality plastics and would survive the hustle and bustle of the toy box. I think this toy has a good concept but it’s too limited and doesn’t do anything other than fire the ball and collapse on itself. The child needs to do this manually so it can get boring very quickly. I wouldn’t recommend this toy to a friend. This toy would be okay with many similar themed toys to create one play experience, but on its own it will not hold a child’s attention for long.  Mrs. S – Son 7 Years

I thought the set looked nice and simple at first but I was a little disappointed with the items received because there was only one character and this limits the entertainment value. So my child only played with the set for about ten minutes before she got bored. The quality of the toy is great; it is very sturdy and made of durable material. I do not think the toy offers great value for money because of the limited contents she got bored as a result I would not consider buying it. Margarita Alcantara – Jana 3 Years

How To Train Your Dragon Battle & Collapse Playset Stockist Information