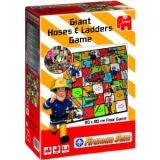 Climb as many ladders as you can but avoid the hoses with the Fireman Sam Giant Hoses and Ladders Game. The game is easy and entertaining for both parents and children and is priced RRP £9.99, available at Amazon and Toys ‘R’ Us.

A good quality game that is really durable. Nice compact storage box for size of game that can be used to store other things. It’s similar to snakes and ladders, a true classic concept. The concept of the game was quickly understood by my Son and found funny. Game was a perfect length for the age group, where the attention span is still quite short. Aids counting without realizing they are also learning and having fun. My child also enjoys stacking the markers from the game too. Great classic game with a fun character. Zena Jacobs – Scott 3 Years Old

A very cute game! It comes in a bright and eye-catching box and the game concept is easy to understand for an adult. My son struggled with the concept as I think he was a bit too young, but he still enjoyed playing with it in his own way. My Son liked to dance on the mat which itself was good quality. I think it’s expensive for what it is but it is a cute game, probably suited better for an older child. I will keep this and see if my Son uses it more for its intended purpose when he is a little older. Lucie Carter – Daniel 4 Years

Great product for Fireman Sam fans! It comes with a small space saving box too which you can store other toys in. The box is sturdy and isn’t fiddly for my children to open. It is small and doesn’t take up much space. It is very straightforward to use, given it is modeled on the classic game of snakes & ladders which most people will have played before. My 4yr old quickly understood the rules after a few minutes but my 2yr old did not so we just played as a pair against my 4yr old (saying that, it’s not aimed at his age group). I had no concerns regarding this being age appropriate. The parts are all large, too large to pose a choking hazard. This is a fun game and it definitely kept the attention of my children and they were happy to play it more than once on the same day. This has encouraged my children to use their math’s/counting skills as they have to move the appropriate amount of squares that the dice added up to. Also, it made them take turns and was happy to do so. It also helped with their colors, and remembering which counter was theirs. The quality of most of the product is good, nice chunky counters to move on the board and the board is durable plastic that is impossible to rip/break. My only complaint is the dice. It is made from foam and my 2yr old did try to bite it, so it now has teeth marks in it. It is more expensive than traditional snakes and ladders, but given it is a popular TV cartoon, then I’d say it was priced as you’d expect. I would consider buying this product for a child who was/is a Fireman Sam fan. Overall, it is a well made product with the parts being large enough for undeveloped fine motor skills making it easy to join in. The children found the pictures interesting on the board, and found it fun that they had to slide down hoses. Tracy Weir – Ashton & Ethan Ages 4 & 2 Years