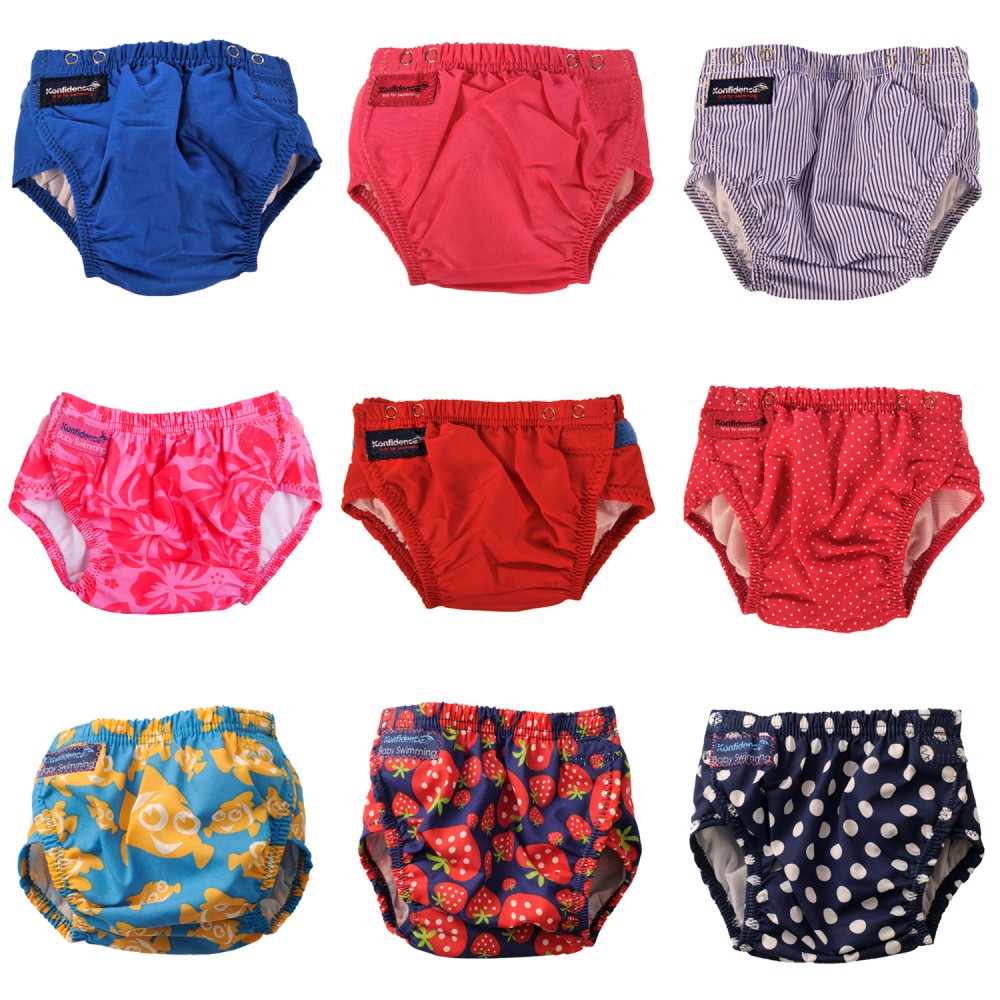 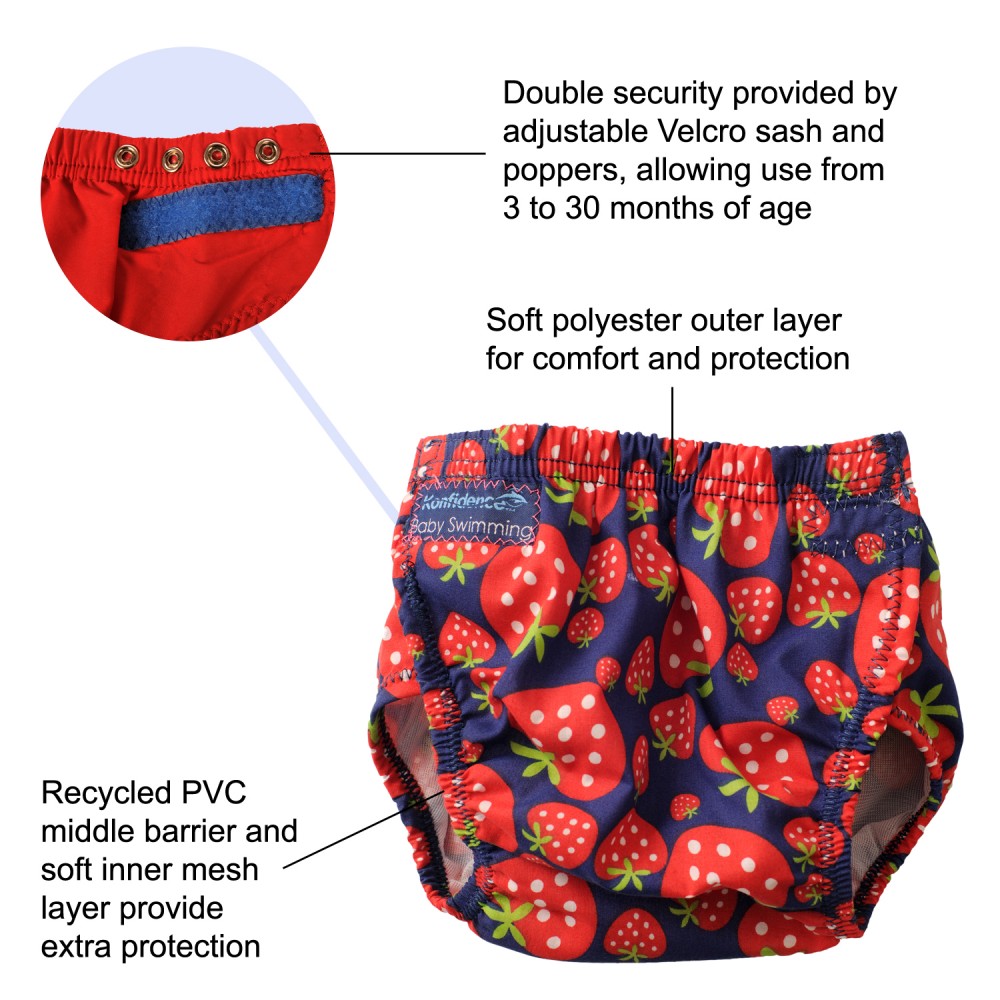 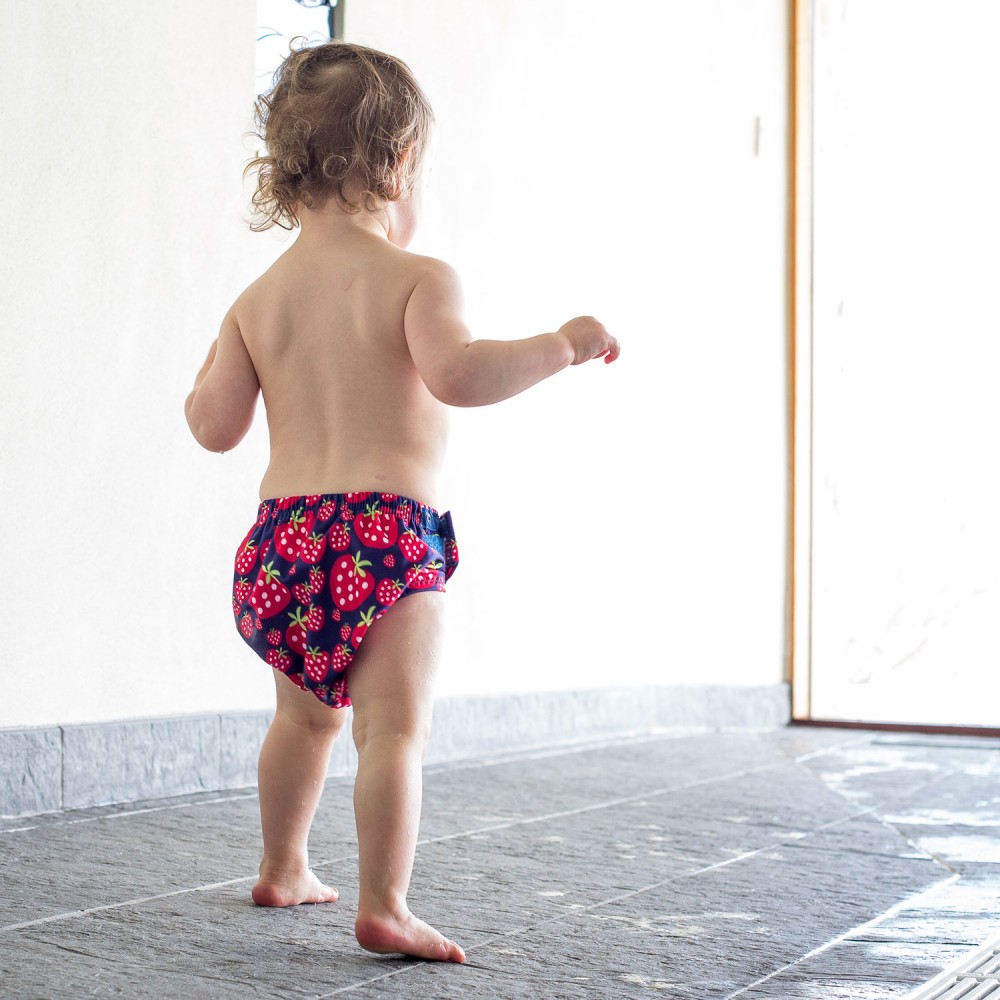 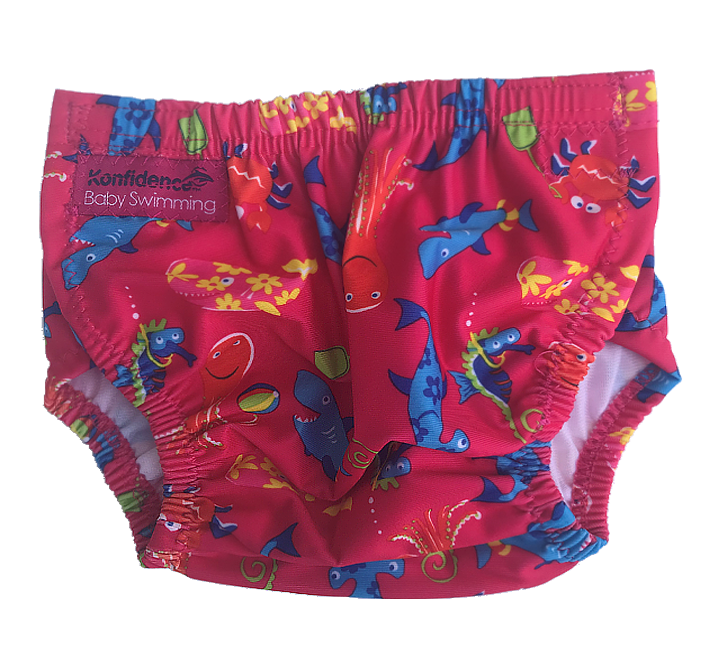 If you’re taking your baby or toddler swimming, then the first thing you need to make sure is that they’re hygienically safe and sound. The Konfidence AquaNappy provides the all-in-one total solution, with its one-size-fits-all design making it superb value. Incorporating a triple layer design, the Aqua Nappy comprises of a soft polyester outer layer, recycled PVC middle barrier layer, and soft inner mesh layer. The reusable and eco-friendly swim nappy is made doubly secure with an adjustable Velcro sash and poppers, allowing it to be sized up from 3 months to around 30 months in age. No other layers or inserts are required – the AquaNappy IS the swim nappy. Just pop it on and you’re ready to go swimming. Tested and endorsed by swim schools since their launch almost 10 years ago, this multi award winning swim nappy has time and again proved the most effective solution for preventing little accidents from spoiling swimming days. And of course; they’re machine washable. Click the ‘technical icon above for more details. The Konfidence AquaNappy – the only swimming nappy you’ll ever need.

I thought this was nicely made, nicely packaged and a cute design (strawberries). The nappy is so simple to use it doesn’t really need much instruction! The Aquanappy fitted Silas well and was easy to put on. Silas seemed comfortable, but the nappy did ride up his bottom quite often. He didn’t seem bothered, though. Probably more bothered by my repeatedly pulling at it! This was as easy to use as a disposable, and more environmentally friendly! He looked cute, too! It did work although he didn’t have any accidents. It was easy to remove, but it had held onto a quantity of water which gushed out a few minutes later in the changing room to my surprise! It was very fast at drying too (though the weather has been amazing!).  The quality overall is really lovely. It offers excellent value for money; much better value than disposables! I was happy with the design and particularly liked the Velcro + poppers feature as Silas loves undoing the Velcro on his washable nappies and wraps, but the poppers on the Aquanappy stopped him. I would buy this again; it would make a cute and useful gift. I would recommend it to my family and friends. It is great and a cute alternative to disposable swim nappies. Amber Marshall – Silas 13Months

This product is a very pretty simple pair of swimming pants. The instructions were very easy to follow, although the product was very easy to use anyway. Unfortunately I couldn’t seem to get this on tight enough to be confident that it wouldn’t leak if there were to be any accidents. It seemed to work very well although there were no major “accidents” while we were using.  Daisie seemed ok when she did have it on. It was extremely easy to use, looked pretty and seemed to be very comfortable, also dried very quickly in the sun so was even able to put back on straight after an afternoon nap!!! It was extremely easy to remove! Just undone and taken off! The item dried very quickly, Daisie was able to wear it for an afternoon nap and put it straight back on after 45 minutes. I thought the product quality was lovely and the pattern was very pretty and it seemed very hard wearing without being uncomfortable! It does offer value for money. I would maybe consider buying another in a different design! I would recommend it to others. Me and Daisie enjoyed swimming using this product, although didn’t feel confident enough to use a public pool with a swimming nappy underneath we did get some lovely comments from strangers how pretty her swimming nappy was!! Ann Mountford – Daisie 13 Months

This looked very colourful/thin and lightweight so easy to pack; I was looking forward to using it. The instructions were fantastic and easy to follow. It was a little loose around the leg on Erin as it only had poppers on one line. If you had a younger baby I don’t think this would be of any use yet. Sadly the poppers on mine kept coming undone. Erin did seem comfortable in it; was a soft fabric and did not leave any red marks and she did not scratch at it. I think that if the poppers had stayed done up I think it would have given a lot of freedom to move as did not need a nappy underneath. While it was fastened we had no accidents. It was simple to remove; just un-popped…magic. It air-dried really quick; after a rinse ready to use next day. The quality was ok; the only issue we had was the poppers sometimes came open. I thought such a thin pant would have leaked and it clearly didn’t so that was a surprise. It does offer value for money as it can be re-used and comes in a good range of colours. The only improvement to the design for me would be the poppers. I think a double layer of poppers which would allow you to size better around legs like a re-usable nappy for example (which we use) This would have helped if your tot has smaller legs etc. I would mention it to others for them to try if they had older ranging babies, and I liked the other stuff from the company too. It was fun, lightweight, and surprisingly works. I think it would be better on a bigger baby, fit wise. Rebecca Sandles – Erin 16 Months

I would buy this again; it would make a cute and useful gift. I would recommend it to my family and friends. It is great and a cute alternative to disposable swim nappies.