Saved In Baby Toys and Toys 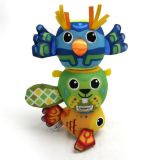 My initial impression of this product was eye-catching colours, great packaging and smart concept. As with all Lamaze toys, it very well built. I didn’t have any concerns about allowing my baby to hold this soft toy. Everything seemed well-sewn, with no loose parts and is cleaned by surface wash only. Initially I thought that my son would love it as there were rattles and crinkly bits on the characters, but he lost interest after 5 minutes. He was not interested in stacking them, either. It is different to other baby toys.  I think it is a brilliant idea as it has magnets in the characters which make stacking much easier and fun compared to traditional stacking cups. There is no wrong way to stack the characters so will be fun for babies / younger toddlers. As with all Lamaze products, the Totem Pole Stacker comes in eye-catching colours and fun characters. The product is very well built, sturdy and looks like it could last for a long time. The materials used are of high quality too. I do think it is slightly expensive though. Now that I have tested it I wouldn’t buy it purely because my son did not like it although I think it is a great product. I would recommend this to family and friends because it is a fun product and I think other children would enjoy playing it. When I first saw the description of the product I thought my son would love it to bits as it looked like it is a fun toy. However, my son was not interested in playing with it at all. It could just be him as he is generally not interested in most of the commercial toys we have bought for him. He did play with the crinkly parts of the characters for a few minutes but he lost interest after a while. I have tried re-introducing the toy to him after a few days but he did not show any interest still. I do hope that he picks them up again and enjoy stacking them when he is older, though, as I think this product is different from other products on the market and is a great concept. Xiau Li Fong – Jayden Tan 10 Months

The product seemed brightly coloured and felt nice. However I was not sure how long it would entertain my son. The quality seemed very well made. I had no concerns at all with my baby holding and playing with this toy. It held his attention but not for long. It had magnets which made it easier for Hugo to stack them. The quality was very good and the value for money is ok. I wouldn’t buy it at this price at his age but maybe if he was slightly younger then I would. I would recommend it to others with younger children as I think it would be more fun. This product was very good quality and a bit different with the magnets to help babies stack it. It would be very entertaining for a child about 8/9 months but my son at 11 months was only interested in it for short periods at a time. Elaine Bissett – Hugo 11 Months

My initial impression of this product was it was brightly coloured, easy to use, an innovative idea. It appears to be good quality. Stitching appears to be firm and well put together. I have no concerns with my baby holding this toy. It’s easy for a baby to hold and manoeuvre. I think this would be a fantastic toy for a younger child, aged around 6 months. At 14 months my son liked it but moved on to something else quite quickly. It is quite different in the way it used magnets to hold the pieces together. My son learnt quite quickly that they only stuck together at the magnetic point and was pleased with himself when he achieved this. I do think that it is over priced. If it was cheaper I would buy it for a younger child. I would recommend it for younger children aged 6 month plus. Generally I liked this product. I liked the magnetic action of the blocks sticking together when stacked. I liked the bright colours and the different textured materials that are used as well as the different sounds within the blocks i.e. Rattles, though I think this could be developed and improved slightly. Sarah Tarry – Ezra 14 Months

I think this product is different from other products on the market and is a great concept.