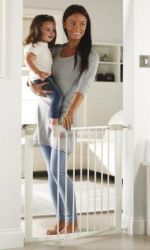 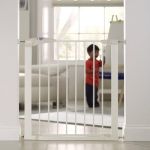 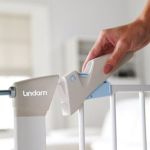 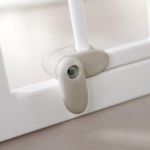 The Sure Shut Axis gate combines quality and value incorporating the Lindam U-shaped pressure fit ‘powerframe’ for ultimate strength when in position. A two way opening system and secondary locking mechanism provide added safety. With contemporary colour ways and softly contoured components the Axis safety gate will look great in your home. The handle design allows simple one handed opening and closing and all Sure Shut gates feature wider walk-through areas for practicality. Suitable for openings between 75cm and 82cm and can be extended up to 138cm with separately available extensions.

Initial impression is that thestair gate looked quite good.  Packagingfine and instructions easy to understand. Very easy to install and just as the instructionsstated. Yes it’s as secure as it can be without being drilled to the wall.Unless you have a VERY strong child I wouldn’t think it would budge. Notparticularly easy to use one handed, possible but not particularly easy. It hasa secondary locking mechanism at the bottom which is quite handy as you canmake it so that it opens both ways or just one. Yes the additional featureswere beneficial as it meant I could open the gate both ways which was helpfulto me as I used it at the opening of my kitchen which is very small. It meant Icould open it outwards and away from me whichever side I was which when in thekitchen going out into the hall was great as there isn’t a lot of space in thekitchen for me to have opened it towards myself.  Good quality very strong and secure.  I would say this offers value for money.  It could be wider, it’s annoying that Icouldn’t use it on my stairs as the space was too big for it and I would havehad to buy an extension. It would be better if you could adjust the size to fitthe top of stairs without an extension. I would purchase this item if I needed one. I would also recommend.   Because of the size and the fact it’s veryhard to use one handed I give it a four, otherwise it would have been a five. Doeswhat it says on the tin. Is secure and trustworthy which is what you need in astair gate.  Ruth Davies – Florence 15Months

This looked well-presented and was keen to try this out as Millicent is now verymobile.  Packaging good and instructionssimple and easy to follow.  Once fitted Imust say this is secure.  It does stateeasy to use one-handed but for me I did not find this so. It does have someextras including secondary lock at the bottom which means you can use to open eitherway or just one way.  Quite handy.  As I look after Millicent during the day andwe spend most of the time in the living room and kitchen it was ideal to havethis set up in Kitchen door as kitchens can be dangerous for little ones andMillicent always trying to get in there! I like this stair gate and first one I have ever used.  A bit fiddly to set up and could not reallyuse one handed as stated.  However it isvery well made, good quality and I do believe value for money. As a first timeuser impressed with quality and would recommend.  Would purchase from Lindam again in thefuture as website is informative and good safety items on offer.  Cathleen Bryant – Granddaughter Millicent 13 Months

Myinitial impression was that it looked smart and well made. I knew the brand so trusted it. I like the fact the design was pretty neutral so it could fit intoany house.  Packaging good andinstructions pretty simple to follow with pictures (which always helps!).  The gate had to be adjusted prior to puttingit in place then removed to adjust it several times. This took time and it wasfiddly, you also needed a tool to do this (provided). I have a previous Lindamstair gate (the ‘easy fit plus’) which I found a lot easier to install withoutthe use of any tools, here you just slotted it in then adjusted it once inplace. It doesn’t budge once in place, you can tighten it to suit you. It is advertised as a ‘one handed gate’ neither my Husband nor I can openit one handed. We have had a few friends try it, and they could not master iteither. The problem I think is that the opening mechanism is too narrow meaningyou need a very strong grip to open it. If it was chunkier you would need lesspressure to open it thus making it one handed. Again our other Lindam stairgate is much better here and had a bigger clasp making easier to open onehanded. The gate stops (the little clips at the bottom of the gate) can openand close independently of each other meaning you can have the gate openone way only. We used it on the stairs so it could only open one wayanyway.  It looks smart and the qualityis good, it looks well made, I would trust this product. Making the openingclasp bigger would make it easier to use one handed. I would also prefer asimpler fitting mechanism as they have with their other model. It does do the job perfectly adequately and is reasonably priced, but not beingable to use it one handed is a massive draw back for me, esp. when I am nearlyalways carrying something (or someone!) up or down the stairs. I also found theinstallation fiddly, I already own a Lindam ‘easy fit stair gate’ I found this so much easier to fit. EmilyBadham – Molly 6 Months

Is secure and trustworthy which is what you need in astair gate.