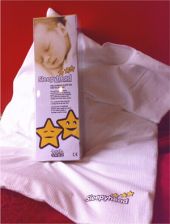 There is nothing to particularly like or dislike with the design of this blanket. The weights do help keep it in place, unless he is really thrashing around but then I wouldn’t expect it to stay on then. Using the blanket has definitely helped with settling Luca at night. Perhaps could afford to be a little bigger, as my son probably won’t get much benefit from it after 6 months and it says for use up to 9months. The thickness however is fine. Wasn’t really concerned about the colour, as it was more for purpose than design. Material is good, nothing too heavy and breathable. The outer layer is fine to wash in the machine. The inner is a bit more labour intensive (as requires hand washing) but that was to be expected. I’m not sure I would have paid £20 had I had to buy this in the shops but having already used it; it is worth its weight in gold! I definitely would recommend it any parent who’s little one has trouble settling on their own. The blanket really has helped no end. I only wish I’d had this sooner! Louise De-Balsi – Baby Luca 15 Weeks

We were excited to try out this product and when we got it I thought it looked promising. There was an adequate amount of weight in the blanket though because of the size of the blanket it could easily be kicked off by my child. I did feel as though this blanket did make my daughter less fidgety in her sleep as she did not twitch from side to side in order to get comfortable as she did before using this blanket. As you can only use this blanket for children over 4 months I thought that the blanket was very narrow and the only was I could get good results was to laver it in-between other blankets, although this became quite awkward in the hot weather when it was too warm and we only needed to use one blanket.  I feel as though if there had been more material at the sides I could have had the option to tuck it into the sides of the cot. The material seemed of good quality, although I did feel that the Velcro closing to be of bad placement as it was right at the top and was very harsh under my daughter chi, if it was a softer Velcro or placed elsewhere would have been much better. My daughter always seemed to like the blanket being placed on top of her.  I think she found the gentle weightiness of the blanket comforting. The top layer can easily be removed and laundered in the machine and then just quickly ironed.  The inside however cannot be placed into the machine and had do be done by hand and as you cannot tumble dry it problems could arise in the winter time with drying times. I thought at £20 the blanket was quite good value. I will continue to use this blanket for my little one as I think it does provide her with some sense of comfort and she is now in a bedtime routine of getting the blanket placed on top of her. My daughter loved the feel of this blanket on her and made her more comfortable in her cot.  This resulted in her getting a better night sleep which made us both happy. Michelle Lochery – Baby Erin 4 Months

I was impressed with the idea of the blanket and Theo was at a stage where he moves around while sleeping and when snoozing during the day often his blanket crept off. Overall I was looking forward to trying it. I think the design was good, the weights stayed in place and when there was any movement it was easy to get the weights back to where they should be, I found the blanket slightly small and it could be improved by increasing the size and putting in more weights. The blanket most definitely stayed in place and due to the weights and the snug fit of the blanket Theo slept for longer and was more settled. I certainly think Theo had more of a sense of security with the weighted blanket. I think the shape and thickness was fine for the blanket but it could be improved if it were bigger. Also it may have been slightly heavier however the weights seemed heavy enough to do the job intended. The quality of the fabric seemed fine, overall have no complaint about it, possible could have been in higher quality fabric but not something that put me off. It does feel comfortable and seemed to give him a sense of security that reinforced that it was comfortable for him. The weighted allowed him to feel relaxed quicker thus settling to sleep quicker and happier. There was no sign of any irritation from the blanket. The blanket was easily washed and did not in my opinion need any more or less care that other bedding and blankets. I think it does offer value for money however I would be more inclined to buy it if it were less say £15 so I could buy two to use at alternative times. I use the blanket more for daytime naps and sleeping in pram as now using sleeping bag at night. Used weighted blanket during hot spells as the fabric is cool and the weights allowed him to sleep without moving around and becoming warmer and more irritable. I found this a different and well thought out product. I would never have considered buying this until I had tried it and now would recommend to others.  Using the Sanz blanket has been positive, it has introduced me to a product that works and in fact improves life by supporting me to settle my baby and ensure he stays settled thus both he and I benefit from this. Jillian Neilson – Baby Theo 14 Weeks

The blanket really has helped no end. I only wish I’d had this sooner!