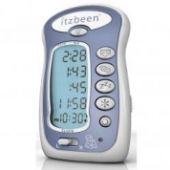 The Luvion Itzbeen Baby Care Digital Timer Pink allows you to learn your baby’s natural rhythms by letting you know when you last changed your baby’s nappy, last time you fed your baby, what time you baby awoke or fell asleep.

Wasn’t sure what the product was intended for at first then thought it was a clever idea. The idea of using it proved good for the first few weeks and initially arriving home from the hospital, but wouldn’t use it for a long period of to time as the routine becomes more natural. Good for remembering which side to feed on but time consuming to operate when lots of other things to do. I used the timer both all night and at night time but sometimes forgot.  Tired at night so harder to use. I think it is quite expensive when not essential. Good that it has a torch for at night time and helps you track baby’s feeding and sleeping pattern but after a few weeks it’s not needed as this becomes a lot more natural and no need to fuss with technology to tell you how to handle your baby. Once you get to know your baby it’s not needed anymore. Clever idea as before I got it I was recording feeding time on a notice board and tracking it that way. Some people will warm to it more than other, those who like gadgets and technology. Those, like me, who would rather use pen and paper, would not be so fussed about it. Suzy Mackenzie – Baby Grace 3 Months

A handy pocket sized product that could be easily carried around. Personally I think the product is of no use to me as I don’t feel the uses are relevant.  For example I would change a nappy when the baby needs it and I use a little note book to note down feeds.  I can see why others may like it though, especially if the child was going to be passed from carers to carers or if you had multiples, twins etc but for me it just wasn’t that useful. They are comprehensive and I liked that there was another one that you could use for whatever, medication maybe? It was good quality and very sturdy. In my opinion it did not offer value for money as I do not think it is a necessary purchase but if it will benefit you then yes it is value for money. In general I would not recommend it as I do not think it is necessary but if I knew a friend who had a multiple birth or who was sharing the care of the child with a variety of people or leaving them for large chunks of the day I think it would have its values.  For example, if you left a child at a grandparent’s and wanted a handy way to know straight away when they were last fed, changed or when they slept I can see its value for that. It was positive experiences as far as the features go; I just don’t think it added anything to my experience of childcare. Alex Turton – Baby Seth 4 Months

My first impressions were surprise because it is not something that I even knew existed. I am not too keen on the concept of using the timer to care for my baby; I just can’t see it as being necessary. But using it did make things a tiny bit easier; it jogged my memory of the last time I fed William. It did enable to me see his patterns easier and I used it mainly during the day. The patterns that are included are sufficient and it is good quality. I would consider it a luxury definitely not a necessity. Not something which I find necessary. As I am a baby unit supervisor I am reasonably confident around babies. Maybe less confident new mums would find it more useful. Carolyn Eastwood – Baby William 6 Months

But using it did make things a tiny bit easier; it jogged my memory of the last time I fed William