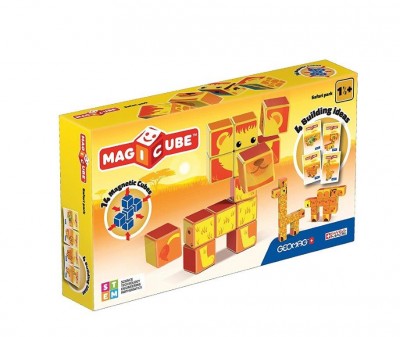 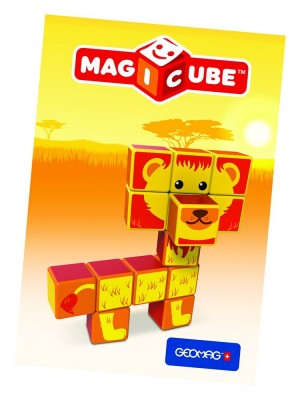 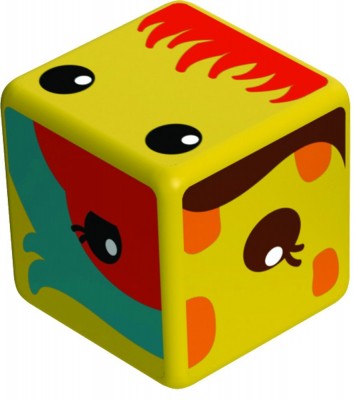 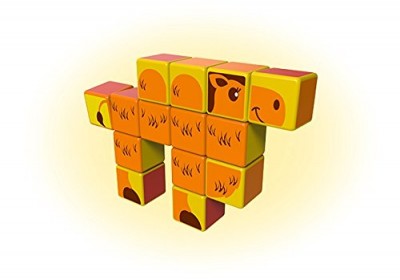 From the lion to the giraffe: the world of safari comes to life with our magnetic cubes.

The box
was had great illustrations and ideas to build on it, however it was far too
big for the product so I have had to find another box to keep the toy in. I
also had to keep the pictures on the box though as my daughter thought the
mixed up animals were fantastic. For the price of the toy a reusable box
of an appropriate size would have been much better.The product is so easy
to use and needed little instruction. The ideas cards are easy to follow. Both
children loved the toy however there’s no way a young child would be able to follow
the pictures to build the animals because each piece has 6 sides all with
pictures so the correct side has to be chosen, then the pieces all put the
correct place. However that didn’t spoil the enjoyment for the little one and
his older sibling was able to build the animals. As above, the animals
were definitelytoo hard for the 19 month old and challenging for my 4
year old. I think the age recommendation on the box is a little too young for 6
sided puzzles. If there was only a picture on 1 side it might be possible for a
2 year old. However they are definitelysafe and fun for young
children. The magnetic cubes were much easier for the little one to use
than regular cubes. I didn’t find the cubes helped creativity. My older child
wanted to copy the pictures and found it tricky to make her own given the
options. The little one only wanted to build and knock down cubes, not particularlycreative.The
toy was great to improve fine motor skills for the little one and logic skills
for the older one.The product was of very high quality. Good weighting
and durable too.The product is fantastic but there’s no way I would pay
full price for it. You don’t get many cubes for the price andstill have
to find a suitable container.I really liked the fact the cubes were high
quality and educational for both ages of children. Personally I would not
purchase this too expensive. Yes I would
recommend in terms of quality. No for price so probably overall a no. Love the
product but it’s far too expensive and the box had to be cut up to keep the mixed
up animals that aren’t shown on the cards. Also you have to buy/find a box for
the product as the box is enormous for the size of the cubes. My children
thoroughly enjoyed playing with the toy but it’s not something they choose to
use every day. They use it as either building blocks or a jigsaw and enjoy
using it every now and again. Jacqueline
John – Girl 4 Years 10 Months & Boy 1 Yr. 7 Months

Thought
the packaging seemed quite thin and initially felt the contents were sparse for
the price. The box was quite thin. I would prefer something that was more
robust and could be opened and closed to store the blocks and cards. The
product is fairly self-explanatory. The picture cards were not the easiest to
follow and I felt they would benefit from step by step pictures. My child did enjoy this toy. This was an immediate hit and she loved being
able to put the blocks together and taken them apart independently. She also
liked finding things that they stuck to because of the magnets. My daughter did
not find it easy to build the animals on the box, but I would expect this
activity to be well beyond her skill set at the moment based on her age. I
loved that the magnetic cubes allowed for independent building and stacking but
could still be pushed over. This is a
very stimulating toy. She loved making
different shapes and towers. Certainly educational. After making a few towers which fell over my
daughter worked out that she needed to make a bigger base. She also liked
seeing what the blocks would stick to due to the magnets and enjoyed attaching
them on and off the edge of her ball pool. Excellent
quality, really robust. Good size and bright engaging colours. I was sceptical
at first but my daughter has loved these from the moment she got them and still
chooses them as a favourite play activity. So for us definitely value for
money. I most loved the opportunity for
independent play and adult directed learning. I will definitely be interested
in other sets in the range as they have great growth and development potential
and offer a lot of independent explorative play opportunities. Yes I would
recommend. Great toy for child
development and nice and compact for storage. I loved the product as did my
daughter. The only thing holding this back from a 5 is I would prefer a
different storage tub and staged photos for the animal building. Fantastic
product which initially appeared expensive but gives such a great scope for
play and learning as your child develops.  Kimberly
Thomson – Katharine 20 Months

Packaging was appealing, bright and colourful, although once opened it then seemed quite excessive for the amount of blocks it contained. It also wasn’t re-sealable which is often a plus point when there are several items to a toy (so they can be kept together easily). Nice pictures illustrated what to do on packaging. My daughter did not find this easy to play with. She was initially frustrated that the blocks stuck together and found some of the animals difficult to make. The magnetic cubes were great once she had figured out they stuck together, but then the playing became about sticking them together and pulling them apart rather than creating the animal pictures. This does stimulate creativity a little, but not with the intended purpose the manufacture promotes. Would not say this was especially educational, although they would help begin conversations regarding the animals on the blocks. Good quality and durable (having been thrown around the house quite a bit!). Expensive for just some blocks with magnetics in them. As it was magnetic it allowed my child to build large towers that didn’t fall easier, she enjoyed doing this, although after a few attempts she became uninterested. I personally would not purchase as feel too expensive and doesn’t keep child’s attention. Initially excited, but disappointed as it did not stimulate our daughter and did not maintain her attention enough for her to ant to create the animals, perhaps she is too young for a product like this. I would definitely not recommend this to anyone, especially as the price seems extremely high for a product like this. Jen Gilroy-Cheetham – Girl 19 Months & Girl 5 Yrs. 4 Months

My children thoroughly enjoyed playing with the toy but it’s not something they choose to use every day. They use it as either building blocks or a jigsaw and enjoy using it every now and again.