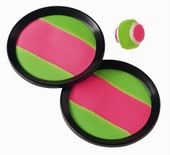 No one does fun like Mookie both indoors and out, we have got the perfect accessory for every game.

A more classic version of Catcherball, without the sticky fingers, but just as weird and wonderful as the ball flies between and fixes onto the brightly coloured panesl; A great game for improving hand-eyecoordination.  Suitable for children aged 3 years plus.  Includes nylon look ball and 2 catch discs.

£3.99 Available in all leading toy stores or check out local stockist online www.mookie-toys.co.uk

Cody couldn’t wait to get into the package and start playing with it so first impressions were great. Not too much packaging like other toys. No assembly needed. There were no concerns at all with the Catcher Cody has played with this many times and has never had a problem with it. It definitely keeps Cody’s attention for ages, infact I had had enough before he had. This will help with Hand eye co-ordination as they have to throw and catch the ball with the Velcro bat. The quality is good, it looks well made. Well worth the price. I would buy this product, infact I have recommended it to my son’s child minder. This was a great toy to test it kept Cody busy for hours, well worth the money. Sarah Franks – Cody Aged 2 Years

Looks like a fun game with pleasant colours that is comfortable to hold. The game encourages running around and improving hand- eye coordination and cooperative play. The packaging is just a plastic bag really, although you could at least see the product. I have No concerns with this product, only that it is a game for more than one player (which means me) and can not be properly played with on his own. James played with it for 5 to ten minutes, but became bored with it as he is unable to catch or throw accurately yet. He preferred to hold out his hand with the glove’ on and I would aim a throw at it. If the ball stuck then he was pleased, but he did not understand how to move his arm to attempt a catch as the position used to catch with this is different to the 2 handed catch he is trying to learn at the moment with a normal ball. Used frequently I would expect James to improve his hand-eye coordination as he would have to learn to maneuver his hand to catch the ball.  It should improve his throwing aim too, although at this age I had to stand very close (less than 1m) to have any hope of him getting the ball anywhere near my ‘glove’. I can see that when he is a bit older he could enjoy playing it with a friend. He has played with the ball without the ’glove’ – kicking, throwing, rolling etc. It’s nicely made, the strap around the hand was firm enough and the rounded shape of the ‘glove’ was comfortable.  The ball was basically a tennis ball so robust enough. The ball tended to bounce off the glove if thrown too hard – perhaps a softer ball may have worked better, although a softer ball would not throw accurately over long distances, so would not be as useful as James became more skilled at throwing. Perhaps include 2 balls:  a soft ball for younger children and a tennis ball for older children. A fun game for 2, although better suited to a child who can already throw and catch accurately, rather than a 3 year old.  Kirsten McCarthy – James Aged  4 Years

This was a great toy to test it kept Cody busy for hours, well worth the money.