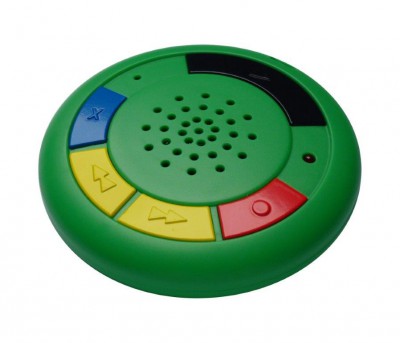 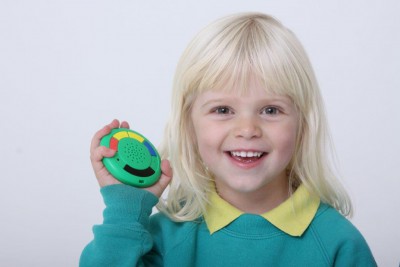 Multi-Memo is an exciting new voice recording product. It can record and playback multiple messages, with a total recording capacity of 6 minutes, (360 seconds). Up to 60 voice messages can be saved and stored on the device and then played back one at a time by using the skip forward and skip backward buttons. Individual messages can also be deleted if/when required. A locking switch at the back of the unit allows the user to protect any messages from being accidentally erased.

Really excited by it we had been
searching for something similar that could record sounds and was easy for a
child to use. Appearance of the item was
brightly coloured with big buttons however I do feel that the colours if a
little brighter would have been better.This is very easy for an adult and
child to use. We used the multi memo to
record noises on and to get our child to push and copy the noises, it actually
helped. There is a lot of space to record lots of different noises. This
helped keep Vinnie’s attention for longer. It has helped Vinnie make
several new sounds plus it also helped his hand eye coordination by getting him
to push buttons. This would keep Vinnie’s
attention for an adequate amount of time.
Rest of the family also enjoyed it by using it to record silly noises,
and also helped with Vinnie’s Speech and Language Therapy. High Quality
also stood up to being stepped on and thrown about. Definitely value for money as brings enjoyment
to everyone. I liked everything about
this product. I would purchase and
certainly recommend. I really enjoyed
this product. It helped my son progress with his sounds and hand eye coordination
but also had the fun aspect for the rest of the family.Sarah Lowe – Vincent 2
Years 9 Months

Looks
ok, reasonably sturdy, large buttons good for small fingers and brightly
coloured. Tadhg:
It looks quite interesting and very nice and colourful. Packaging very
simple, just the name. Could do with some colour or acetate so you can see the
product, no clue as to what’s inside. Tadhg said he loves it because it looks
old-fashioned and he loves old interesting things! Very simple concept – can
record and replay up to six minutes with the built in microphone. Tadhg totally understands the concept – to
record things so you don’t forget them, and also for recording fun things. For
a basic idea, Tadhg has got so much value out of it. He has Asperger’s’
syndrome, and loves repetition, so could play with this all day. Also got lots
of giggles for mummy recording ‘Go to sleep!’ and replaying it to him and his
big sister repeatedly (Oh I have so many uses for it myself!) Him and his
sister record messages for each other, (she is 10) and really get a kick out of
it. Neither child particularly wants to share it when they are using it though!
I think it would help younger children engage with unfamiliar technology. It was so easy for my son to use, he didn’t’
read any instructions and was using it within a couple of minutes. No other uses
outside the ‘record/play’ use as there aren’t really any ways to use it
otherwise, but it’s rarely used for memos, more for recording things to make
him laugh. He sometimes asks for me to record tomorrow/later’s schedule for him
(something that is very important to him!) Good for playing ‘detective’ too
(recording clues!). Sturdy bright plastic. Easily handles being lugged around
in a small boy’s bag. Looks a tiny bit cheap, but then that’s as much down to
being bright/plastic. I would have said not good value upon seeing it, but it’s
really given him tons of fun. Tadhg says he’d pay £5-8 ‘at most’ if it was his
pocket money. I’ve got to say £8-10 is the most I’d expect to pay. Tadhg
disliked finding out how much it was! He likes how much fun it is, he didn’t
think it would be as good as it is. As a parent, the five hundredth time you’ve
heard a recorded raspberry can push you over the edge, so I like that it has an
off switch! Think it would be a good present for a younger child. I’d say over
7/8 they’d lose interest very rapidly. I
would recommend if they were looking for a specific product like this. Good way
for kids to entertain themselves, surprising amounts of ways to keep them
entertained. From a parental point of view, it’s great for his ASD side
(reassuring, enjoying repeating), but there are times it’ll drive you potty
hearing the same thing over and over! I liked not having to repeat myself Nice
to press a button to say ‘tidy your room’ repeatedly! Tadhg said he thinks it’s
great for autistic kids as it helps his memory, and it’s nice to hear the same
things again, it’s good fun. Lydia Niziblian – Tadhg 7 years

Was eager to try this out and looked
good quality when arrived. Arrived well
packaged and looked bright, colourful and easy to use. The instructions were clear and easy to
follow. Very easy for adults and ideal
for children to use. Was great to use to
record messages, instructions, noises and other fun things that would interest
our daughter. She had fun pushing the
buttons listening to the noises and repeating where she could. This certainly kept her amused and we could
record new words, phrases and sounds when required. It was lovely to see her mimic the sounds and
the new words and has really helped her with her progression. It has also
helped tremendously with her speech therapy.
A great way for our daughter to learn and interact with sounds phrases
and noises. We all had fun using this
and Cheryl really likes her new toy.
This is really good quality as has been thrown all over the place and
still looking good. I like the
simplicity of this product, the ease of use and the fact you can record so
much. This has been great fun to use,
really helped our daughter with her progress and we have had so much fun. I would definitely purchase and will be
buying one for my sister as her son has similar learning difficulties too. Would certainly recommend. A simple idea that delivered so much fun to
our daughter. Lesley Hall – Cheryl
4 Years

I would purchase and certainly recommend. I really enjoyed this product. It helped my son progress with his sounds and hand eye coordination but also had the fun aspect for the rest of the family.