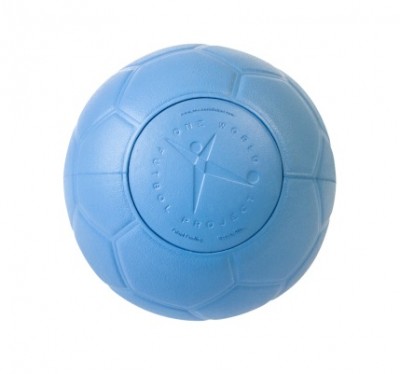 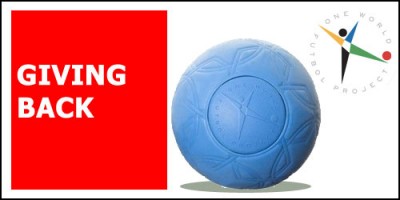 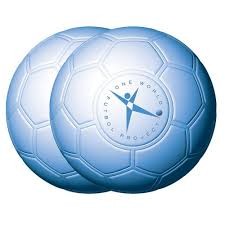 The One World Futbol is a nearly indestructible ball that never needs a pump and never goes flat—even when punctured multiple times. Whether for use on the street, at the beach, at home or on the roughest landscapes in the world, the One World Futbol will last for years.Because of its durability, the One World Futbol enables players, organizations, adults and youth to play anwhere on any surface and save money and resources by eliminating the constant need to replace ball. The One World Futbol comes in both an adult size 5 and a youth size 4.

Read more about the nearly indestructible One World Futbol.  http://www.oneworldfutbol.com/

Emma Awarded The One World Futbol 4.8/5

This looks long lasting and I liked the bright colour. I am
familiar with the buy-one-give-one model that is detailed in the leaflet. Harry
enjoyed playing with this ball; we took the ball on many park trips and also
tried it on harder surfaces such as concrete and shingle. The quality is strong,
built to last. This offer excellent value for money because you give one to
third world countries who don’t have very much which is great. I would buy this
again because it is built to last and saves using pumps as doesn’t go flat. I
would definitely recommend this to others. It would be good if it came in
different colours or designs. We have had a lot of fun testing this product on
family days out; it has been most useful as the ball has not softened or popped
even when played with on tough grounds. It also saves a lot of time and messing
around with pump. Emma Mckenzie – Harry 13 Years

Cath Awarded The One World Futbol 5/5

It is a good looking football and I really like the idea of
giving another ball to a community in need. Whilst it is quite expensive for a
football it should last a very long time. It is a really good idea and one
other company’s should think about. Both my son’s enjoyed playing with this
ball; they both enjoy football and have been playing with it a lot. It is
excellent quality and should last for years. It offers excellent value for
money because it doesn’t need a pump and will never go flat so should last for
years. I would definitely consider this ball because footballs never seem to
last long at our house and I seem to buy at least 2 balls a year as they either
puncture or go flat really quickly. The Futbol has addressed these problems and
I am hoping I won’t need to buy another football again. I highly recommend it;
it is a good ball and I like that they give another ball to a community in need.
After a month of continued use footballs start to look a little tired however
whilst the Futbol looks used it is still exactly the same size as it was when
started playing with it. Initially I wasn’t convinced that a ball could be
indestructible but now we are reaching the point when cheaper footballs start
going down I can see that the Futbol looks used but is exactly the same size as
it was at the start. Cath Joyce – William 12 Years and Luke 8 Years

Samantha Awarded The One World Futbol 5/5

When I took it out of the box, I thought it was lighter than
I expected and thought it would easily blow away or be too bouncy however I was
wrong. It was a lovely blue colour and very smooth. I had never heard of the
buy one give one concept before until I read the leaflet and information, which
is a brilliant concept, very thoughtful and kind. Kieran absolutely loved the
football, he said it didn’t hurt his feet to kick and felt like a real football
even though it was lighter. He said it didn’t bounce too much which is
brilliant for a football. His friends loved playing with it too and they have
asked where it is from, I had told Kieran about the football and he gave the
information to his friends. At first I initially thought it would be too light
to play but it stays on the ground really well and isn’t too bouncy, meaning it
doesn’t fly across the garden/field/playground. It is very smooth and the
colour is really boyish. After a few uses of my son’s footballs, they show wear
and tear and start to go flat. He has played with this football nearly every
day on all kinds of terrains, grass, paving, and tarmac. Not a scratch on the
ball, has not deflated and seems to be everlasting. I am considering buying
another one for my 8 year old as he wanted one to play with so he can play with
his friends too. I have recommended this product to several parents who I know
their kids are football mad like Kieran. 2 parents as far as I am aware are
ordering one for birthdays and a few are considering for Christmas. We all
loved it, we enjoyed playing with the football so much. All of us as a family
love playing with it. Kieran and his friends also love the ball and they have
now told him he has to bring it every day. It’s great! The football seems
light, but it stays on the ground really well. It’s not too hard and doesn’t
hurt the kids feet when they kick it. It isn’t bouncy which is appropriate for
a football. I love the idea that under depraved kids also get a football
when we buy one. We loved playing with it and it so far hasn’t got a scratch,
isn’t deflated and still as good as the first day we used it. We have used it
on the beach, the park and Kieran takes it to school to play on the playground
too. Samantha Bresnahan – Kieran 9 Years

We have had a lot of fun testing this product on family days out; it has been most useful as the ball has not softened or popped even when played with on tough grounds. It also saves a lot of time and messing around with pump.

Emma Awarded The One World Futbol 4.8/5