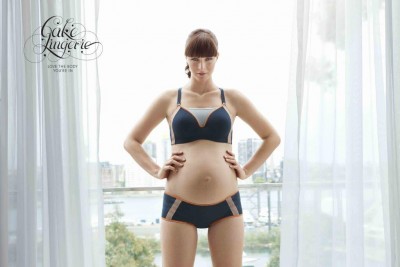 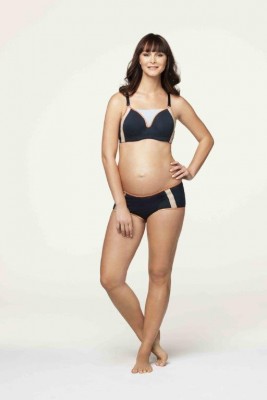 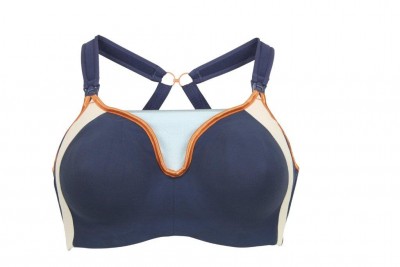 I first thought the nursing bra was rather big and bulky. I
also thought it wasn’t very attractive. I thought it wasn’t very sexy and
looked rather like a swimming costume. The opening of the bra was very easy and
smooth. The bra was very snug and instead of just being supportive, it feels
very comfortable. I go to Zumba every Monday and wore this bra. It did feel
very comfortable. I did feel like I jiggled a little bit wearing this but I
still found it comfortable and more supportive than wearing a normal sports
bra. I think it does look like a sports bra. With the clasp easy to unhook, it
was very easy to breastfeed wearing this. It doesn’t look like a nursing bra to
me. I was complemented at Zumba by another lady there and she was surprised
that it was also a nursing bra. I do prefer the racer back style for
exercising. It feels like it provides extra support and looks less like a bra
when exercising. My favourite feature is the discrete under wire giving extra
support. It is part of my exercise regime now and I am planning to breastfeed
until my daughter is 2 so I will continue to use this. I would recommend this
to family and friends. Even though my first impression was that it looked
rather unusual for a breastfeeding bra, for use as a sports bra it certainly
does its job and feels incredibly comfortable with the added bonus of easily
feeding my daughter. Tara Chalcraft – Aria 1 Year

I thought the bra and pants looked very supportive and were
also bright colours that looked quite modern.
The material was very soft and I couldn’t wait to try it! The panel across
the front was quite high and it was underwired. It had a special attachment at
the back to put the two straps together but I couldn’t work out how to do it by
myself as it was too difficult. It was
also difficult to open the cups with one hand as the material was quite stiff.
It started off comfortable but dug in after a while due to the underwire. It
was very supportive and had a good shape under clothes. I think it did look
like a sports bra. It makes breast feeding easier than a normal bra but I found
it was a bit difficult due to the underwire and the thick material. This doesn’t
look anything like a nursing bra. I couldn’t get it into the racer back
position by myself so only used it in the Sports Bra position. My favourite
feature of this bra is the support. I will continue to use this for exercise
and going on walks. I would recommend it to others; I thought it was a good
product and was only really let down by having an underwire. This is a great
sports bra with the added bonus of being able to breast feed in it, only
slightly let down by having an underwire. Ann Hodson – Matthew 10 Months

Bra set is very sporting looking with a bright orange trim
contrasting brilliantly against the navy. The material is nice and soft,
feeling very supportive with sturdy thick straps yet breathable. I like the
overall style of the bra although I find the blue mesh panel at the front is
slightly too high. It peeks up over a standard vest top which is frustrating.
The fastenings are secure and easy to open and close. I found the bra extremely
comfortable to wear and very supportive whilst exercising. The material is soft
and breathable but thick enough to provide more than adequate support. I found
the bra to be very supportive and had no worries about too much movement or
pain while jogging. It does look like a sports bra; the flashes of bright
orange and blue make the bra look very sporty. The high front and breathable
mesh fabric also show it’s made for exercise. Breastfeeding is easier than
using a regular bra although I found there was too much material gathering and
pushing my breasts into an awkward position to comfortably get my baby to
latch. It is possible but didn’t encourage me to keep wearing the bra for any
longer than I required it. I’m able to feed more discreetly using a regular
nursing bra. The only thing for me making this bra look like a nursing bra is
the clips to detach the cups from the straps. This isn’t a negative feature
though. I preferred the bra as a normal back but think the option and ease of
making it a racer back is a brilliant feature. I like how well structured the
bra is. It’s really easy to clip the cups back onto the straps without
searching for clips that have slipped also the ease of turning it into a racer
back. I will continue to use and recommend it to others. It is a very
comfortable, supportive sports bra with the optional convenience of a nursing
bra. Kirsten Thomson – Evie 10 Weeks

Even though my first impression was that it looked rather unusual for a breastfeeding bra, for use as a sports bra it certainly does its job and feels incredibly comfortable with the added bonus of easily feeding my daughter.