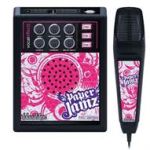 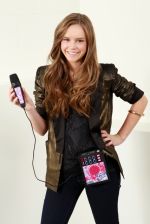 My initial impression of this product was that I thought it looked cheap and would break easily. It had nice packaging and item was secure, but maybe to secure as it took us a while to get it out. We felt the mic was a good size for all 3 kids. It’s a fab idea, my son has load more confidence since playing with the mic. I have even got a fabulous video of him singing a whole song. There was great entertainment for the whole family and the kids now love putting on their own mini concerts. This was great for my kid’s imagination. They have used it in loads of things from singing to taking food orders in there drive through .I knew the girls would love it but my son is more in to cars and computers and I can’t believe how much he likes it. I feel this is great for social skills, role play and great for kid’s confidence too. I think they will play with this toy for a long time to come as its great for all ages. They started with singing, now they use it for role play and to get me to run after them i.e. mum I need a drink, when I am in the other room. The songs included are not songs any of my kids have heard before so took a while to sing along to them, I feel it would be better with more well-known songs. We thought that the special features were fab and the kids had loads of fun changing the sound of their voices. It was really easy to transfer songs using the app too. It is great quality has been dropped loads of times and kids have had a little fight over it too. The only thing I was not happy with is the clip to put it on belt or jeans was not great. It fell off loads so kids just held it in the end. I would consider buying this now and recommend it to others too. It is a great toy to keep the whole family entertained. I am sure we will have loads more fun with it.  Irene Gilmour – Ellie 9 Years, Hayden 4 Years, Jemma 2 Years

This looks cool – I thought my daughter was going to have a lot of fun with this! The packaging was nice and compact – all nice things come in small packages!! I thought the size of the microphone was great for the size of my daughter’s hands. The concept of the toy is great but I would like there to have been some more up to date songs to sing. I think this has a limited entertainment value as you can only really use it to sing the songs that are programmed into the machine. I was quite surprised that even though my daughter didn’t know any of the songs included she went off and learned one of them very quickly. I thought the quality of the toy was a bit flimsy. Although it looks good from a distance it is very light with no substance to it. I think it will end up at the bottom of the toy box and not be played with again. Looks good in the packet but doesn’t live up to expectations once in your hand. Holly Jenkins – Rebecca 8 Years

My first impression of this product was bright packaging, but cheap looking toy. The packaging stands out well as so bright. I thought the size was ok, not too big and not too small. I think that the concept is a great idea for the budding singers in the family. It seemed to take a bit to get used to how you use it, but thought it was good entertainment afterwards. I had no concerns what so ever, with her playing with it once the toy was set up. My daughter loves singing and music, so this product is perfect. I think it will just drive us mad before her. Once the music is loaded, it is easy enough for her to work and change on her own. The special features didn’t seem to make much difference to it. It was easy to transfer songs using the app once we got to know how. I think it could be a little sturdier with maybe a metal belt clip instead of a plastic one, and could turn down a little quieter. I do think the price is a little high too. I think once music loaded up and volume adjusting headphones sorted, it is a great product, although needs to be a little studier. Shirley Glover – Caitlin 8 Years

It is a great toy to keep the whole family entertained. I am sure we will have loads more fun with it.