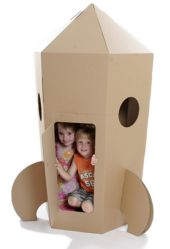 The Paperpod Rocket – Made In The UK

The Paperpod Rocket is a fantastic resource to encourage role-play and stimulate your child’s imagination.Your young astronauts can decorate both inside and out before zooming off to distant planets to enjoy their own space adventure. Flat Pack Size: 92cm x 90cm x 5cm. Assembled Size: 70 x 70 x 170cm. Weight per unit: 5 kg. Delivery: Courier delivery. Price Includes £5.20 P&P.

When the box was delivered I was a bit shocked by the size, it was bigger than I expected. It is a thin box, but large in diameter. It appears very plain as a first impression, but the idea is for you to paint or draw on it to personalize, which my little girl enjoyed helping with. The packing was simple like the product, brown recycled cardboard, but very effective, product arrived in perfect condition. It is fiddly to assemble; it required two of us to put it up, and trying to feed the pieces into the slots. But it became easier the following times. It took about 10 minutes to assemble. The product was sturdy and stable, but I personally wouldn’t take it outside for fear of it getting wet. The product was large, with the windows at a perfect height for my daughter to look out of. The only downsize was to get through the door she had to step over a 14cm high piece of cardboard which she sometimes tripped over. My daughter enjoyed going in and out, and hiding things in it. She liked peering out of the holes. She was happy and wanted to play with it. I felt it was a little expensive for a cardboard, but it was a large product. My little one enjoyed the product, but I felt it was a little expensive and am not sure how long it would last. Fiddly to put up, but my daughter did enjoy it once it was assembled. Samantha Jones – Scarlett 22 Months

I thought it looked like great fun for my 3 year old to play with. Easy to use website, good concept, good pictures to illustrate products. The smaller items like dolls house, castle etc look better for home use for us than the rocket as we don’t have much room. Product comes fully packaged in slim cardboard box which can be reused to store item when required. Very easy to follow step by step instructions & diagrams. Fairly easy to assemble, I had a little helper which perhaps wasn’t so helpful. The last couple of slots are tricky. It is sturdy enough for 1 child to play with but if 2 try to get in it, it wobbles a bit. Also the door ripped after a couple of days. It is fairly big when in the middle of a bedroom, takes up a lot of floor space and my son’s room is really spacious. It doesn’t fit through doorways so I would reccomend building it where you intend to use it. Also being made of cardboard it cannot go outside except on the sunniest wind free days and they don’t happen often. Having said that it is actually only really big enough for one 3 year old to sit inside, 2 can stand inside it but then have no room to play. I did consider taking it to work at the playgroup but due to the lack of space inside it I felt it wouldn’t be safe enough should a couple of the children push and shove to try to get in it. My son did enjoy it but that was mostly down to the novelty value, he wanted it taken down after a few days so he could get his farm back out on the bedroom floor. His first impression was "WOW, that’s cool!!" but he then wanted his brothers in it too and all 3 of them simply couldn’t fit. He was less impressed then. It is a good concept, however the rough and tumble play of toddlers needs to be taken into consideration before purchasing. I would be interested to know how sturdy the castle and dolls houses on the website are and how long they last for. The cardboard is of good quality and all the tabs & slots matched up when assembling it. It has been well manufactured. It is a fair price and there is a lot of scope for children to engage in imaginative play & creative play. However it isn’t particularly durable. Good idea, think it would be great for an infant school class who were doing a project on space or travel. They could have great fun decorating it & they would probably have the room to accommodate its size. I do like the concept but it didn’t quite live up to my initial impression, but I might consider purchasing the dolls house or castle from the website. Victoria Goldie – Ruari 3 Years

I didn’t really know what I was expecting but when the product arrived I did not really get that excited. It was too big for the children to help build it and was very rather difficult and cumbersome to build on your own. Product arrived in a flat cardboard box, with good strong packaging but the product was obviously rather big. Simple easy to read instruction. Nice pictures and good wording. The instructions made it look easy, but it was hard to do on your own, and the places where it was supposed to hold together there awkward to join. I had to use sticky tape in the end. It’s a good size for 2 small children to play in. But I feel it would be more beneficial for use at a play group or nursery as to have such a large object in your house takes up too much space. Plus you can’t leave it in the garden because of the material it’s made out of. They enjoyed playing with it. But as it started to wear and tear they lost interest. When you buy such a large toy that needs assembling, it needs to be able to be left outside, especially when space in the house is at a premium. Saying that after looking at the website there are some smaller models which I think are good ideas. Due to its size being too big for a smaller house, also I think it’s far too expensive for what it is. Got very frustrated putting it together, far too big for a small house, would be too expensive. A good concept, the children had fun in it using there imagination. Lydia Smith – Ethan 3 Years

The product was large, with the windows at a perfect height for my daughter to look out of. My daughter enjoyed going in and out, and hiding things in it.