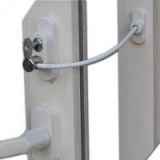 Good idea especially for exploring toddlers.  Arrived in a clear plastic sandwich style bag which lacked a little on the product presence side.  If I saw it on a shelf like this I would walk straight past.  Instructions clear and concise and easy to follow.  Easy to fit, no problems encountered.  This was not adjustable there was only one level.  If you leave the key in the lock this was extremely easy but then small fingers would be able to unlock it too easily so you would need to take the key out and as its quite small it could then be easily lost, leaving you stuck when you do need/want to open the window further.  Strength of the lock looked great.  I don’t think my children would be able to fall out of the window although slimmer children may get a body part stuck.  Overall does the job stated well.  Slightly more expensive than it looks/feels, would be looking to purchase when on offer/sale.  The key operation causes problems as stated above and also this raises a concern in the event of a fire as it would make the window useless as a means for escape.  We have just had a new replacement window installed that has fire safe baby hinges which have a button release (can only be operated by an adult).  The other option was a pressure release hinge that would break at a set pressure point (significantly more than a child can achieve) and can also then be broken by a member of the fire service to gain access.  Maybe one of these options could be incorporated? Good idea but there is safer alternatives available.  Still safer than not having a restrictor on the window and have seen them installed in many public locations where alternate means of escape are available e.g. children’s ward at my local hospital.  Good idea and good product which could be great with a few tweaks.  Leah Rose – Elissa &Isacc – 7 Months & 18 months

Excellent concept as safety is a big concern for our generation. The packaging was just a zip lock plastic bag– nothing fancy but held the product and the instructions perfectly well.  The item says "easy fitting guide” but doesn’t tell you exactly what you need to do – you can see from the photo what is required but the instructions would be better if they were a step to step guide.  After working out what we needed to do, it was quite simple and easy to fit to the window.  This item was not adjustable but it would be a good feature to have on the product.  It was really easy to take the restrictor off the window if needed to fully open –it was held in place by a key that opened and closed the restrictor.  The lock and cable were extremely strong and sturdy so I was confident that it was strong enough on the window.  I was confident that my son couldn’t/wouldn’t be able to open the window when the restrictor was in place – we removed the key from the lock as well as there was no way he was going to be able to open it.  Good quality product which is well made and sturdy.  I think it’s expensive for what it actuallyis but it’s a peace of mind product that I’d be willing to spend the money on for the safety of my son.  There needs to be a way to lengthen and shorten the restrictor – our windows are quite thick so we couldn’t open the window too much as the restrictor cable is too short.  Even though I think it’s a good product, I don’t think it works any better than the latch that comes on new double glazed windows as these allow air to come through and the child can’t open the windowas it can be locked.  It’s quite an expensive product and most windows come with a latch on them so windows can be open and locked.  Good concept but a lot of money for something that comes as standard with new windows.  Rachael Britton – William 2 Years 6 Months

Looks OK, wasn’t impressed with how it arrived. Packaging was very poor just arrived in a plastic bag if I had paid £19.99 for the product I wouldn’t be impressed.  Instructions should have been more informative as it’s a product that is indented for the safety of a child and more effort and information should have gone into this 1 little diagram is just not sufficient .  Was easy to drill but not 100% sure it was put on in the correct way because of poor fitting guide.   This was not adjustable as it opens 10 cm only you don’t have any choice.  It was very easy to take this off when you needed to open the window fully.

It certainly seems strong enough and I have put a lot of force onto it, like anything I think it should be checked from time to time for wear or screws coming loose.  Giving me peace of mind?  This is difficult to answer yes and no when locked the key stays in the lock, my little boy has a low window and can undo locks I could never leave him alone with it on in case he did unlock it which is very easy to do.  It is a  good quality product and looks well made.  I do think it’s over priced and personally feel it should be sold at around £10.  Design improvement – 1st it needs proper fitting instructions and the key should be able to be removed when the lock is on this would give me 100% peace of Mind and also it’s easy for someone to put their hand inside and open it and get in.  Also two keys should be included in the packet not just one.  Good idea but needs more work on the design.  Lynn Barratt – William 3 Years

Good idea and good product which could be great with a few tweaks.