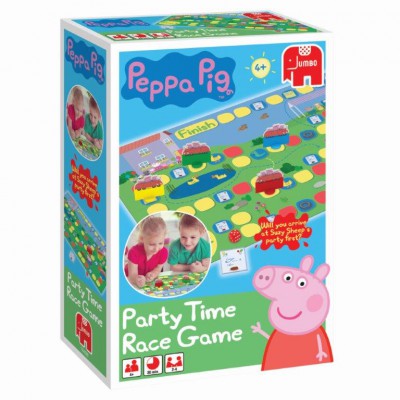 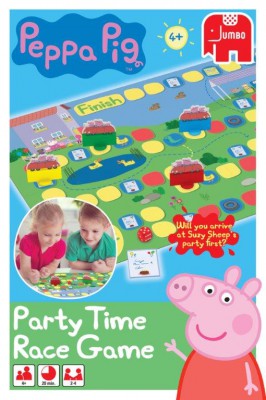 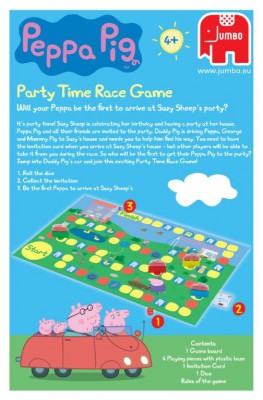 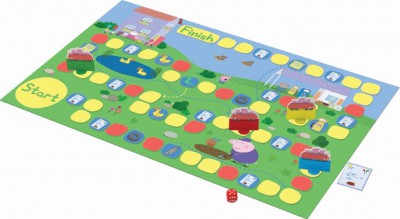 The Peppa Pig Party Time Race Game has arrived! This fantastic new game is an adaptation of the classic Snakes & Ladders format, with an exciting twist. The Peppa Pig board game allows children to race against each other in a bid to be the first to arrive at Suzy Sheep’s party with the invitation card, whilst avoiding several distraction spaces and losing the invitation to opponents along the way. The game is a great way to help children develop numeracy and social-play skills, whilst being fun and entertaining.

Looks good
from the packaging. My daughter was very
keen to open and play it. The packaging is much bigger than it needs to be
though, so she was a little disappointed to see what was inside (until we
started to play it). Too much packaging, but otherwise looks great. The design and how the game is portrayed are
fun and interesting. Bright
packaging. The game is easy to play and
not complicated at all. It is the
perfect level for a 3 – 4 year old. As
an adult playing it felt as if there were not enough squares with something to
do on them, but my daughter never seemed to notice this. She really enjoyed it, especially the concept
of having to get and keep the invitation. The game was very easy to follow and
understand for her. It was easy for her
to pick up from the very first game, but interesting enough for her to want to
play it over and over again. The game kept my daughter interested for the
duration of the game. It is just the
right length of time to play and keep her attention. This game certainly teaches children to
learn to take turns and share (as they have to learn to give up the invitation
should someone else land on the appropriate square). It also helps with basic counting and
learning the basic concept of how to play a board game. This game is very easy to follow, but still
be interesting. I think this game is perfect for its intended audience, but it
won’t really grow with your child. I
would imagine my daughter will probably not want to play it when she is 5 or 6
but for 3 and 4 year olds it is great. I have not really seen how many of this
type of game are on the market, but this is certainly a good game to play and
keep my daughter occupied and happy for half an hour to an hour and she has
asked to play it many times since we received it. Best part of game is the fact we can play it
together and that my daughter can take turns. She has never played it with
another child, but I think she could. It
is probably easier with an adult to help follow the different types of
instructions of squares you land on though. My daughter has asked to play this
game on a number of different days of her own accord. We presently have a couple of pre-school
board games at home. This game is well
made and is not as flimsy as some toys and games you can buy. It is good quality. This is certainly good
value. I like that it is a good quality product which is easy to play and fun
for the age group it is designed for. I
would buy this as a present and I would recommend. A good, easy, fun game for
pre-school children. Clare Roberts –
Isabelle 4 Years

The box is
very eye catching to children, brightly coloured. The packaging is eye catching
and very sturdy for little children. The game is very easy to understand for
adults, with basic straightforward instructions. Alesha understood that she had
to get to the end of the game to win, but she got a little confused in why she
had to move forward or back on certain squares, and she didn’t really understand
why the winner had to have the invitation card. Alesha enjoyed playing the
game, and kept asking questions throughout playing the game, the game kept
Alesha’s attention through to the end of the game. The game lasted just long enough for a 4 year
old, any longer and I think she would have got bored. This game has helped a
lot with Alesha’s counting on every go, and Alesha was good with taking it in
turns. I think this game is ideal for children age 4 and above as Alesha can
relate to the Peppa pig characters, and the game has quite an easy plot. Although, the game could be a little
confusing for the younger players, with
sometimes going back spaces, and may not knowing why it happened. Alesha
has got a really good imagination and she has used the little different
coloured cars to go on adventures in her Peppa pig house. The only down side to
the game, is that the play pieces (cars) could be made of a harder material as
this cardboard could get worn and tatty after a lot of playing. Alesha would
definitely like to see more games like this, especially if the theme was Peppa
Pig or Bing Bunny. The best part of the game was the little play pieces, as
Alesha loved moving the little cars around the board, and all the different
bright coloured pictures. Alesha needed an adult to help play the game, but
understood the concept of the game in the most parts. I think Alesha would
definitely pick this game up and play on her own, and she would probably make
up another game to play with it too. We
presently have 4 other pre-school board games in the house. The quality of this game is overall good
apart from the playing counters/pieces could be made of a better material. I
think this game is priced within the right bracket for this type of game, I
would be happy to pay £9.99 for this game. I liked the packaging of this game;
it was the right shape and size to fit in most toy cupboards. I would be happy
to buy this game, for other children, as Alesha has had hours of fun playing
this game. I will definitely be telling my friends with children all about this
game, as it could help children count, and understand taking it in turns. A
good entertaining game. Emma Cornwell –
Alesha 4 Years

Nice sturdy
box and quality board and pieces. Concept of the game was easy enough to
understand. My son has Autism and enjoyed the turn taking and the passing over
of the invitation was exciting for him. It kept his attention throughout the
game. Maybe for my son there was one too many rules. E.g. the red squares,
which we chose to, ignore the first time playing. By the third time we played
we were able to use all the rules. This was my sons first time using a dice
with me and he continues to use the dice to ‘count the spots’. I would like to
see added to this game different characters as the moveable pieces? So children
can choose their favourite character. A bigger chunkier dice. I would like to
see more of this type of pre-school games available. Best part of game when daddy pig gets lost
and you fall back spaces!! My son would play this game in the future. We presently have a selection of about 4
pre-school board games which are good to have.
Nothing we disliked about this game and I would purchase as a gift. A traditional family board game with
exciting and challenging rules to engage and encourage helping each other. Karen
Hudson – Michael 4.5 Years

I like that it is a good quality product which is easy to play and fun for the age group it is designed for. I would buy this as a present and I would recommend. A good, easy, fun game for pre-school children.