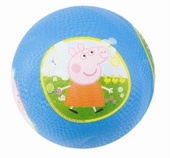 Peppa Pig Playground Ball – Tough durable material (100% rubber) – suitable for all surface play – Re-inflatable – Size Approx 41cm – Suitable for 2+ Years – Great to play with friends!  Roll it, throw it, catch it, bounce it, sit on it, roll on it, the fun is endless!!  Lightweight.

My first impression was that it was quite large – where was I going to store it! My son’s initial impression was very positive: "Peppa Pig!”I wasn’t very good at thinking of things to do with it to begin with & my son didn’t seem that interested, past the Peppa Pig pictures. However, lately we’ve had lots of fun rolling it down a hill then chasing it, and he’s got used to it being bounced towards him for him to stop. It was great for playing together, which children thrive on. It helps with hand-eye coordination, running, ball-handling confidence, taking turns, listening (e.g. waiting for me to say‘ready’ once at the bottom of the hill ready to catch his rolling ball). It kept his attention once we discovered how he best liked using it as this point in his development. I think it will be quite useful inspiration for winter exercise in the park. The quality is very good; I think the uppermost picture may have faded after a week left outside in the summer sun though. It does offer value for money and now after testing it I would consider buying it. It’s a nice variation on an essential piece of basic play equipment (ball). I would also recommend it to others too. We found it slow to warm to it, but lots of fun by the end. Corinne Rooney – Isaac 3 Years

My initial impression of this product was that it was a very large and bright Peppa Pig ball. The playable context of the ball itself is good. It’s great for hand/eyeco-ordination too. My little boy loved the item when it first arrived, but a very large ball, and as he prefers to throw and kick a ball, neither of which is really possible with a ball of this size, so he soon lost interest. He likes to point out the characters on the ball, Peppa, George etc… This toy is of good quality, it hasn’t lost any air and pictures are still very clear. I would say that it is good value for money but unfortunately I wouldn’t buy it now for my son, because he prefers to pick up balls or kick them and this isn’t ideal for that purpose. It’s a nice and bright character ball, if your kiddies like to push/roll a large ball around it’s a good fit. Kellie Morley– Ellis 2 Years

When I first saw it I thought it was really big however Daisy couldn’t wait to start playing with it as she recognised Peppa straight away. We have taken it out with us to the park and she loves chasing after it and bouncing it to her Mommy and Daddy. It is great for eye/hand coordination as she was constantly watching it to see where it went. She likes to sit on top of the ball and wiggle about and bounce on it. The quality is really good and the images are still as clear as they were when we received it. I think it is good for the money as we have had a lot of laughs with this ball, plus it’s Peppa Pig and everyone loves Peppa Pig. I would consider buying it now that we have tried it out and I have already recommended it to friends who have small children. It’s a nice bright ball and if your child is a Peppa Pig fan, this would be ideal. Michelle Lang – Daisy 3 Years 6 Months

It’s a nice variation on an essential piece of basic play equipment (ball). I would also recommend it to others too. We found it slow to warm to it, but lots of fun by the end.