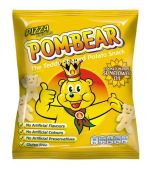 POM Bear Pizza Crisps – Great taste and lightly seasoned with salt. These crisp contain less than 0.1%Trans Fats.  Just click online to read how they are made and the nutritional content.  www.pom-bear.co.uk

The packet is nice and bright, they look tasty and they are tasty.   They’re really tasty, they don’t necessarily taste of pizza, more of an herby cheese flavour, but that doesn’t make them any less enjoyable. The children have all really enjoyed them. Well they don’t really have any nutritional benefits as they are crisps, but they have less fat and salt than regular crisps.  Nice and bright packet. Doesn’t scream pizza flavour at you though. Really handy pack size to pop in to your bag if you’re off out somewhere. POM Bear crisps are a good quality crisp for children due to the lower salt and fat values. Really good value for a premium brand packet of crisps. Most regular crisps are nudging 50p now.  They could taste a little more like pizza; perhaps they could be called herby cheese flavour. Saying that though, they were still really nice. I would definitely buy them again as the children really liked them and my other half kept pinching them for his work lunchbox.  I would recommend these as an alternative to regular crisps due to the lower salt and fat values as well as the taste.  Really enjoyed testing this product. The children really liked the taste and the fact that they are shaped like bears. They didn’t necessarily taste like pizza, but then which crisps actually taste exactly like they should!  Julie Mundell – Harry, Rosie & Annie – 3 Years and 2 Year old twins.

The taste is a very personal choice and I must admit I did not really like the taste of these crisps. Didn’t think they really tasted of pizza, more like herb with a slight cheesy after taste.  No benefits as they are crisps, however much better than normal crisps as they are less fat and less salt content. Good eye-catching packaging. Convenient for throwing in your bag if you’re off out for the day.  Good quality crisps. Good value.  Not many quality crisps retail at 35p.  If they are meant to be pizza flavour then they should be more cheesy and tomatoey.  My daughter took one look at the green bits (herbs) and refused to eat them and I don’t think the flavour is quite right.  Product is good but would not recommend this flavour. My daughter didn’t like them at all and the flavour wasn’t very pizza-ry. She likes other POM Bear flavours but these weren’t for us.  Sophie Cauley – Poppy & Florence 3 ½ Years and 8 Months

Really enjoyed them. I kept nicking them off Harry.  They are quite cheesy, but I really enjoyed them. Didn’t really notice any tomatoey flavour. They’re probably better than a normal packet of crisps, but I know my other half would rather Harry ate a piece of fruit!  Good packaging. Looked like a quality product.  Good for taking out to the park and for taking to work.  Not too greasy and plenty of them in a packet. Tasty.  Good value. There are a lot more crisps for less money than normal crisps.  The taste could be improved if they were a bit more tomatoey. But they were really tasty. I’d buy them for myself and Harry.  Definitely recommend as the flavour is a bit more unusual.   I really liked them, which goes a long for me to buy them for Harry. Harry liked them too.  Ian Robbins – Harry 3 Years 6 Months

The children really liked the taste and the fact that they are shaped like bears. They didn’t necessarily taste like pizza, but then which crisps actually taste exactly like they should!