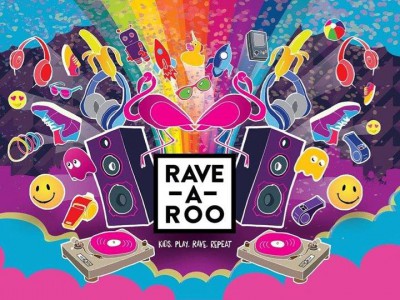 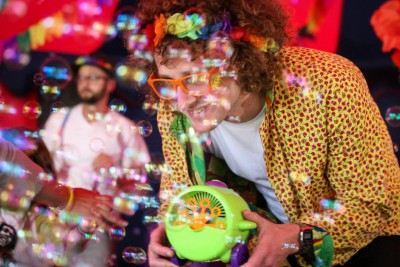 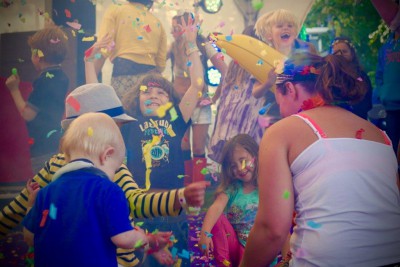 Rave-A-Roo is a brand new clubbing mash-up of festival fun for the whole family. It’s the ultimate party with a festival-style program of big names, top DJs, the disco ball games, LIVE stage performances, confetti mayhem, neon craft, Glow Chill Room, PlayGlow toys, UV tattoo station and the chance for mini-clubbers and their adults to take on the dance floor with Rave-A-Roo resident artists Go! Go! Go! (Dance Set) as seen on Nick Jr.KIDS. can be themselves. dance. let loose. create. watch. chill.
We’ll bring all the WOW that they need.PLAY. hard in a safe environment. There’s games for all. tons of our PlayGlow toys. then hit the Chill Time area.RAVE. party. dance off. however you want to do it, do it as a family.REPEAT. have it. share it. It’s for all ages. and all of us.We’re going to count to three … Come-And-Play Rave-A-Roo

Very dark
upon entering the venue, not much lighting which I though was a bit dangerous,
considering that little children and less able bodies were entering the
premises. Found it easy, as it is only 5 mins from Elephant & Castle train
and underground station and because I was familiar with the area. Other
people didn’t find it quite so easy to locate. As I had one family asking
me where it was and they followed us when I told them we were going to the same
venue. More signage would have been useful, as having spoken to some
parents in the queue; some families came from far afield. Parking is none
existence as it near the main road in Elephant & Castle and it is a Red
Route. Felt vulnerable, as the entrance was too close to the road, where the
road is thin and you had buses and cars taking sharp turns towards. All
it took was for a driver to lose control of their vehicle and they would have
smashed into the crowd queuing up. It was nice, but too dark. Music was a bit
loud considering that it was an event for children and there were some babies
there. So was thinking about the young ones ear drums. Personally I
didn’t really see much too do, and the lines for the face painting and
tattoos were two long as only one or two people were doing them. We also
enjoyed having our photos taken in the photo booth. There weren’t much
bubbles or confeti that would have been a great touch, if there was more of it.
The children enjoyed themselves, especially using the inflatable air vent which
balance small balls in the air, other than face painting and tattoos, there
wasn’t much else to do. They also enjoyed playing with the other children. We
like attending fun family events where everyone can enjoy themselves in a nice
environment. Drinks were very expensive. I would have though as it was a child
event that they would have brought the prices down on their drink, especially
the children ones. We did feel safe as security guards present. For what you get, I do not really think
it is value for money, especially for a family of 4 at a price of £50.00. I would recommend as good family day
out. Good and great fun. Children
and adults would have a great time. Caroline McLeary – Tarek 7 Years

First
impressions looked light a night club.
No parking available as in the congestion zone and best to go by
tube. The entrance was fine and the
staff were very upbeat and friendly. I
did find the venue to be very dark especially as there were so many babies at
the venue. My son loved it, especially the tattoo table and the air
inflatable. My son really enjoyed his
time and asked when we would be returning. I found the age range too wide. I would need to bring a group of his friends
to have a really good day. The toilets were fine. There really wasn’t much choice inside the
venue food wise. I also did not like the
fact alcoholic beverages were being sold in the middle of the day with children
present. Felt completely safe in this
venue. I thought it was a bit expensive
especially if you were taking a bigger family.
I would possibly consider for a Childs party. Although my son had a good time I thought it
was a bit expensive. The music was
geared for much older generation i.e. Parents not enough commercial music for
the children. It was a pleasant afternoon and my son mingled very well and met
some new people. The photo booth was a
good touch. The added extras, flashing
rings, glowing necklaces etc. would be additional spending on top of the entry
fee. Pamela Julian – Miquel 7 Years

I
was curious about a children’s/family event at Ministry. We like music and dancing so this seemed like
something we would enjoy. Ministry of Sound is very well-known and is served
well by public transport both buses and trains.
This meant it was easy to get to and easy to find. As I was familiar
with the area, I knew parking would be restricted / expensive so this was not
an option for us. The staff were friendly and the street entertainers (bubbles
and brightly dressed greeters) were vibrant and fun, this helped to increase
anticipation and excitement for the event. The venue was exactly as I expected,
it was dark with coloured lights, club atmosphere etc. My eight year old totally loved it and was
keen to explore what was inside as soon as we got it, but my 5 year old was
more apprehensive (this is not the usual environment I take him too). Given
that there were a lot of children and the road side, I think barriers along the
queue would have provided added safety and security. It was nice to have a selection of free
activities (there was no added fee once inside) but in the main room (with the
bar) I think this could have been zoned better with age appropriate activities
put together. It felt like the age range
too broad for the activities and better suited to 7 year olds upwards. There was only plastercine for my little one
as the older children dominated everything else. Little ones can enjoy bubbles and colouring
in which would have been easy to include.
However the entertainers were really nice giving children glow bangles
and dancing etc. In the other room the entertainment was bold and bright. My big boy loved it, but it was too loud for
my little one. I liked the tent and the
photo booth especially. Overall they
enjoyed themselves because it was different and something new. As a family we
like to do things together and like to try new things and experience a range of
activities. This could be the type of thing we would do again, perhaps with
pop/rnb music as dance music isn’t our genre. It was weird being offered
alcohol at 1pm in the afternoon with my children, not something I usually
do. Also, I bought two slices of cake
(Victoria sponge & Rocky Road) which was £6 – I thought this was expensive.
The facilities were clean and accessible. We felt safe in the venue as plenty
of staff to hand who were helpful and friendly.
I wouldn’t pay £40 for 2 hours entertainment for the family. I want more!
I think this is an unusual venue for a children’s/ family event. So
activities need to be considered more before I would go again. I would possible
recommend, depending on their interests and family formation (this is better
suited to older children in my view). It was fun and unusual with a range of
activities and the coupons for drink were appreciated. Overall, I found the
event unexpected and unusual; my older son enjoyed it much more than my younger
son. So I think careful billing can help parents and families make a decision
if this is an event for them. The music
was not our preference and some of the activities could do with additional
consideration. It was a nice experience
but for us to come again, I would need to be assured it was ‘our thing’. Valery
Lawrence – Jacob & Jayden – 8 & 5 Years

Good and great fun. Children and adults would have a great time.