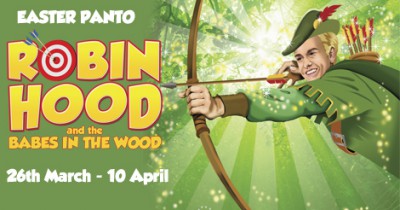 Taking you back in time to medieval Nottingham you will meet the famous Robin Hood, Little John and Tuc-Biscuit. You will ‘Boo’ the nasty Sheriff of Nottingham, admire the beautiful Maid Marion, and meet the babes in the wood.Packed with audience participation, song, comedy and puppetry, join Robin and his friends on an adventure not to be missed!Age suitability 3+Running time 90 min including an interval

£44.00 for family ticket and check online for prices for future shows www.dugdalecentre.co.uk

The
Dugdale Centre Easter Pantomime was the perfect trip out for the Easter
holidays – a great experience for families. The theatre has a lovely atmosphere
to it. The foyer is nicely presented with lots of local information around, and
friendly staff. The auditorium itself is very small giving a lovely, intimate
atmosphere which made it less intimidating for young children and an informal
feel for parents. My only complaint with the theatre would be that on the day
we attended only 1 tap in the ladies toilets worked (out of 4 sinks), and from
continuous use the water was a bit too hot for my youngest to wash his hands. I
assume this to be a temporary blip and easily fixed, but it was a bugbear on
the day. Living locally I’d been past the theatre any times, but never
been inside or to see a show there, so when I found out we had to opportunity
to visit I was very excited. We decided to surprise the boys with the trip so
waited until our arrival to tell them, and they were over the moon with their
surprise. I knew my 6 year old would get involved with the show and have an
absolute ball, and I was not wrong! He got involved with the shouting,
clapping, etc., and whenever I looked at him he was grinning so I took that as
a good sign. I was more apprehensive about my (only just turned) 3 year old,
who has a tendency to get distracted and fidgety after a while if things are
specifically tailored to toddlers – but there was enough entertainment even for
him, He’s not the kind of boy to get involved with calling out, booing,
singing, etc., and I was right in that he only called out once or twice through
the whole show. He seemed to stare at the stage enraptured throughout. The
actors did a really good job at keeping everyone engaged and entertained. The
story was kept simple enough to engage and entertain both children – and they
were both talking about it for some time after the show had ended. It was a
very immersive and inclusive story, which helped to keep everyone engaged
throughout. My 6 year old loved to call out and get involved, and even my
usually quiet 3 year old did once or twice (unusual for him!). My boys love to
enact stories during playtime and the show has featured in playtime quite a bit
since the show! They talk about it frequently, during play and in general
conversation – and even keep talking about when they’re going to go back! The
show was pitched right for the audience, and its simple nature made for a great
quality production – without the need too many set movements or costume
changes, keeping everything simple yet effective. The acting was great –
particularly the Sheriff which my children were impressed with the most. The
experience was excellent value for money – I wouldn’t hesitate to take my
children again during school holidays. I can’t think of any way they could
improve on the show – they pitched everything perfectly. The story, the acting,
the interaction, the simplicity and intimacy, etc. – everything was just right.
We will definitely be returning to this Theatre again. While we were there I noticed that Millfield
also host Chickenshed Theatre performances which we’ve enjoyed for many years
as a family. We usually visit the Chickenshed Theatre itself, but we might try
to visit the Millfield performances to see what it is like. I’m also going to
keep an eye on local listings. I would highly recommend this show – in fact I
already have, and two of my friends have taken their children there this week
to see the show, and they’ve loved it as much as we did! This was a perfect
Easter treat for young children! Michelle Lyons – Xander & Logan – 6 &
3 Years

Jozie Awarded The Dugdale Centre Easter Pantomime Robin Hood and the Babes in
the Wood 4.7/5

A
nice local afternoon out with the family. a lovely local small intimate theatre
– really enjoyed the venue, me and my husband even had a cheeky glass of red in
the interval as we had walked – although maybe not best for then trying to stay
awake!! We were all excited and looking forward to seeing the show. All 3 of my children enjoyed the format and
simplicity of the show. What bugged me – which was the puppet children – they
loved that bit. They were familiar with the story and understood. My youngest
was scared at the scary bits and laughed at the fund bits, it held his
attention. The characters did interact
and they came in to the stand, perhaps for such a small amount it would have
been nice to get all the children on stage as there is not that many in there
and they would have loved that so much. I think the story was simple so it was
easy to follow, the humour made it fun for the older two. They have not really
talked about the show but would not expect them to mention the theatre until
Christmas. I guess for the place it was
held it was good but some details in the costumes were a little hap hazard. I
think perhaps £5 cheaper it would be perfect but yes for a show a good price
and I would pay it. I think giving the puppeteer a small role – even as
nanny’s assistant because she was such a prominent figure – not sure if that is
a helpful suggestion though and also not a big thing. I would go back to the Dugdale centre. The
show that caught my attention was the full money! And I’m going to see it
with friends now. I would recommend for children between my Childrens ages. My
family and I had a lovely afternoon at the Dugdale for this relaxed and
informal pantomime. The staff at the theatre were helpful and the actors of the
show were very warming and happy. We even got to have a little wine from the Wine
bar and the food looked amazing so would incorporate lunch there next time. Thank
you for the opportunity. Jozie Waldon – Jack, Lily, Ted – 8,
7 & 2 Years

The
complementary slip arrived in good time for the play. The theatre is of a good
size. They have managed to put in a lot of seats without it feeling cramped. We
had all been very excited to see the show as we had seen another pantomime
previous to this one. Amber (3) had found the show a little daunting as this
was her first time and she wasn’t sure what to expect. However, during the
interval I had asked her if she was enjoying the show and she told me she was. Ethan
(5) had understood the story of the show very well and was paying attention to
it all. Ethan had been to a previous show with me here before and they had
thrown sweets into the audience for the children to catch and walked away a
little upset as he never caught one. This time he was expecting that sweets
would be thrown out to the audience but it didn’t happen. This was his only upset. However, he was
happy with the generous amount of chocolate gelato he got! The audience once
warmed up had a good interaction with the characters and its always great fun
when they play a pop song at the end and run around the audience singing. Both
children had been role playing after the show at home with scenes my son could
remember and my daughter going along with it! My son has asked if we will be
going to see another show there again soon. The actors and actresses were great
however there weren’t many. It made the stage feel a bit empty at times but
their performances were very good. The tickets were a reasonable price for a
family of 4. The show could have been improved
maybe with a bigger cast and traction of sweet throwing into the audience. The
props and costumes were very good. It’s like a hidden gem in Enfield and every
time we’ve been there we’ve all enjoyed it thoroughly. I would definitely recommend going to see this show it was
very entertaining and the kids had a great time. A great day out for the family
that caters to all children and adults alike. Celestina Brown – Ethan &
Amber 5 & 3 years

The story, the acting, the interaction, the simplicity and intimacy, etc. – everything was just right. We will definitely be returning to this Theatre again. While we were there I noticed that Millfield also host Chickenshed Theatre performances which we’ve enjoyed for many years as a family. We usually visit the Chickenshed Theatre itself, but we might try to visit the Millfield performances to see what it is like. I’m also going to keep an eye on local listings. I would highly recommend this show – in fact I already have, and two of my friends have taken their children there this week to see the show, and they’ve loved it as much as we did! This was a perfect Easter treat for young children!